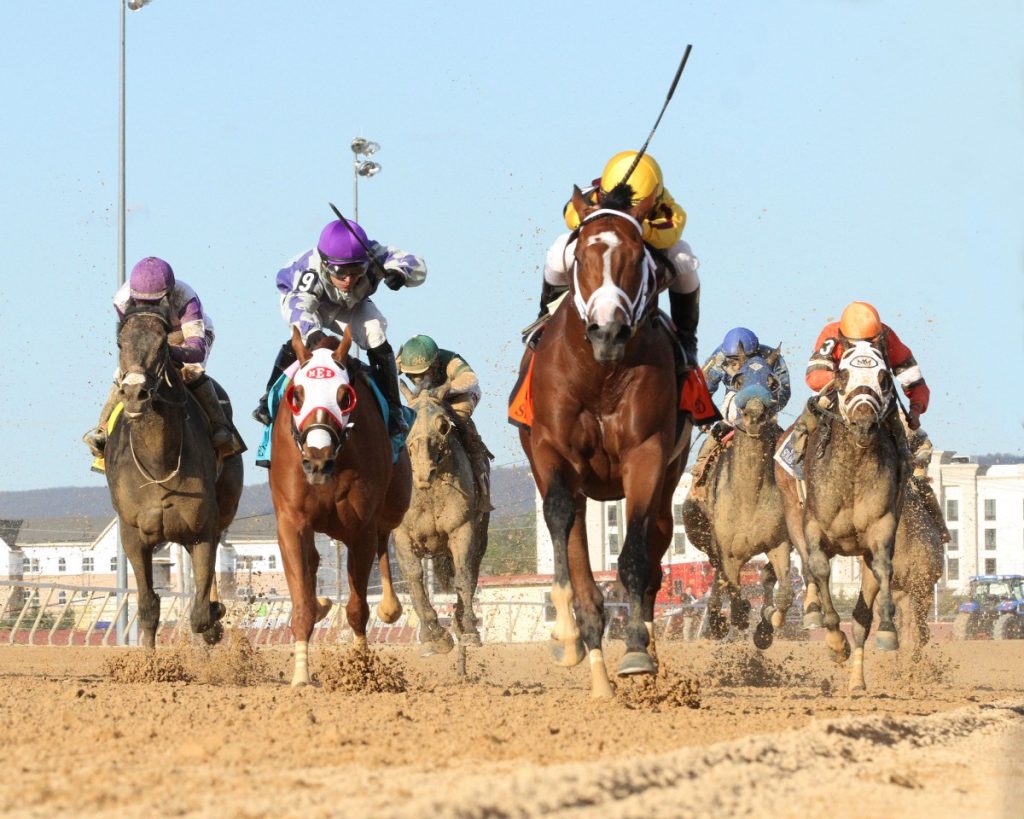 Stonestreet Stables, Susan Magnier, Michael Tabor and Derrick Smith’s Stanford heads a field of eight runners as he attempts to defend his title in the $1,250,000 Charles Town Classic (G2) this Saturday at Hollywood Casino at Charles Town Races. The 1 1/8 mile Charles Town Classic will be the eleventh race on the 13 race program that gets underway at 12:45 P.M. EST.

Trained by Todd Pletcher, Stanford took a slightly different route to West Virginia’s eastern panhandle for his title defense than he took in 2016. Last year, the WinStar bred son of Malibu Moon came into the Charles Town Classic off of consecutive runner-up efforts at Gulfstream in the Gulfstream Park Handicap (G2) and Fred Hooper (G3) – both one-turn events. However, in 2017, Stanford comes into the three-turn Charles Town Classic off three consecutive two-turn races down in Florida.

After a six month break following the Met Mile (G1), Stanford lead every step of the way in taking the Harlan’s Holiday (G3) over Keen Ice and subsequently came up a head short against Imperative – a horse he’ll meet again this Saturday – in the $400,000 Poseidon at Gulfstream. In his most recent outing, Stanford blitzed on overmatched group of opponents in the $100,000 Challenger Stakes at Tampa Bay Downs and stopped the clock in a track record time for the 1 1/16 mile event.

In that victory in the Challenger, Stanford was equipped with blinkers for the first time in his career, a change his trainer thinks can move his colt up even further.

“The main objective with putting the blinkers on was keeping him focused throughout the race,” said the winner of seven Eclipse Awards as the country’s top trainer. “He lost his focus a couple of times, and both times we think it cost him the race. Sometimes it can be difficult to make an equipment change on a horse you’ve had so much success with, but it had been in the back of my mind to try it with him. The Charles Town Classic has been our early season objective, and we liked the position of the Challenger as a prep. So we thought that would be a good opportunity to try them out, and it worked out well. He maintained his focus, was into the race, but wasn’t rank, and the results showed.”

Hall of Fame jockey John Velasquez will be aboard Stanford for the third consecutive time as he seeks his first win in the Charles Town Classic, while Pletcher aims for his third.

In his quest to join Researcher as the only Charles Town Classic winner in consecutive years, Stanford has been installed as the 8-to-5 morning line favorite.

Stanford isn’t the only past Charles Town Classic champ returning to the starting gate as the aforementioned Imperative will become the first horse to start in four Charles Town Classics and hopes to duplicate his 2014 effort when he pulled off a shocker at odds of 26.50-to-1. Saturday marks the third different trainer to saddle Imperative in the Charles Town Classic as Bob Hess will do the honors after Richard Baltas conditioned the son of Bernardini in 2016 while George Papaprodromou did so in 2014 and 2015.

Now owned by a partnership of Loooch Racing and Imaginary Stables, Imperative has certainly enjoyed a level of success at Charles Town that he’s been unable to match elsewhere. In his three prior starts in the Charles Town Classic, Imperative has banked $1,342,500 in earnings, a fact his current trainer Bob Hess believes could be linked to the configuration and surface he’ll encounter on Saturday.

“He loves the track configuration at Charles Town,” said Hess who will saddle his first starters at Charles Town this upcoming weekend. “I think he loves that surface being a little kinder. He lost a shoe in the Big Cap, and not saying he would have won, but his feet are just a little delicate so that’s what really hurt him in there. He’s put some weight back on that he lost after the Poseidon. He’s been training on the synthetic training track at Keeneland, and working over the main. Javier (Castellano) worked him the other day and he’s really happy with how’s he’s doing.”

In a twist of fate, Castellano will be trying to pilot Imperative to a second Charles Town Classic triumph after guiding Stanford to his win last year. So far, the pairing of Imperative and Castellano has left Hess encouraged.

“The horse is quirky, and he and Javy seem to have really clicked in the morning, so we’ll leave it up to the two experts. But Javy certainly knows the track well there and that’s a plus.”

Loooch Racing and principle Ron Paolucci will have more than just Imperative in the gate come Saturday as he also sends out War Story and Cautious Giant in the Charles Town Classic.

Whether it’s the 2015 Kentucky Derby (G1), 2016 Breeders’ Cup Classic (G1) or 2017 Pegasus World Cup (G1), five-year-old War Story has certainly danced all of the biggest dances for his connections. While he hasn’t found the winner’s circle in a graded stakes event yet, he has posted some credible results including a fifth place effort in the aforementioned Pegasus World Cup and a victory in December’s Queens’ County at Aqueduct over fellow Charles Town Classic runner Sunny Ridge and Watershed who won the Ben Ali (G3) at Keeneland this past weekend.

According to his trainer, Jorge Navarro, tackling the likes of Arrogate and California Chrome in the Pegasus took some of the starch out of War Story for a bit but he anticipates a far better effort come Saturday.

“We didn’t have as much time as we would have liked to get him ready for the Pegasus, and all things considered, he really ran a huge race, but we think that race took a lot out of him and we saw that in the Fred Hooper. But since that race, the horse is training very well. He’s put on some weight, and I think we’ll see another really good performance from him.

The third Loooch Racing entrant, Cautious Giant, is Grade 2 placed, but his role come Saturday might be more to ensure a solid pace for his owner’s other two runners.

Cautious Giant ran a close up third in both the Palos Verdes (G2) and Kona Gold (G2) last year but Saturday will mark his first start beyond a mile since September 2015. Even his trainer, Jeffrey Radosevich acknowledges the role Cautious Giant is expected to play.

“The horse is doing well, and I expect him to be a part of the pace so we’ll see what happens,” he said of Cautious Giant.

Saturday will not mark Sunny Ridge’s first start on a six furlong oval as he put in a very respectable effort in the 2015 Delta Jackpot (G3) at Delta Downs where he lost by only a neck to eventual Preakness and Haskell (G1) victor Exaggerator.

“The big thing for us was how well he ran at Delta so we know he will handle the track just fine, and he’s doing really well,” said Servis whose father Joe was a longtime steward at Charles Town. “He paired a couple of wins up in New York and showed he was back on his game.”

In terms of what a victory in a seven figure race at the track he grew up at would mean, Servis acknowledges how emotional it would be.

“I honestly can’t describe what it would be like. I probably wouldn’t cry right after the race, but I can’t make any promises for later that night. It would be incredible.”

Manny Franco will again have the mount on Sunny Ridge in the Charles Town Classic.

For the second consecutive year, Reddam Racing and Doug O’Neill will be represented in the Charles Town Classic. After finishing third with Donworth in 2016, the two-time Kentucky Derby winning duo ships Gangster east after the son out of multiple graded stakes winner Miss Isella made his stakes debut in last month’s Santa Anita Handicap.

Despite checking in eighth in the Big Cap, O’Neill believes the five-year-old unquestionably has the ability to compete at this level.

“He has always displayed unlimited ability in the mornings,” said O’Neill. “He’s a big, good-looking son of a gun. The way he handles the turns in his turf races, I think he’ll love the layout at Charles Town and softer surface.”

Mario Gutierrez rides Gangster who will leave the gate from post 3.

Lady Sheila Stable’s Matt King Coal has always been held in high regard by her connections after being purchased for $250,000 at the Ocala Breeders’ two-year-olds in training sale in April 2015 but hadn’t found the winner’s circle in a stake until March 18 in the Harrison Johnson Memorial at Laurel Park.

In 2016, the Florida-bred Matt King Coal was considered a serious contender for the Kentucky Derby following a front running allowance score over eventual Blue Grass (G1) runner-up My Man Sam but was sent to the sidelines for seven months after tiring and finishing fourth as the 2.75-to-1 third choice in the Wood Memorial (G1). Since returning, he’s locked down a pair of wins in three starts including the win in the Harrison Johnson and brandishes an umblemished record on a fast racing strip.

Lady Sheila Stable and Matt King Coal’s trainer Linda Rice teamed up to win the 2015 Charles Town Oaks (G3) with Hot City Girl. Jockey Horacio Karamanos, second and third on Page McKenney in the 2016 and 2015 Charles Town Classics has the call on Saturday.

Sixth in the same Harrison Johnson Memorial won by Matt King Coal was Jose Corrales’ Bodhisattva, who upset the John Campbell at Laurel earlier this year at odds of 22.90-to-1, defeating Page McKenney in the process.

Bodhisattva’s biggest win to date came in the 2015 Federico Tesio at Pimlico. Xavier Perez has the mount.

Post time for the Charles Town Classic is set for 5:35 P.M. and the race can be seen on TVG, Fox Sports 2 and heard on the Horse Racing Radio Network on SiriusXM channel 93. The Classic will be the third leg of a $100,000 Guaranteed All-Stakes Pick 4 that commences in race 9.