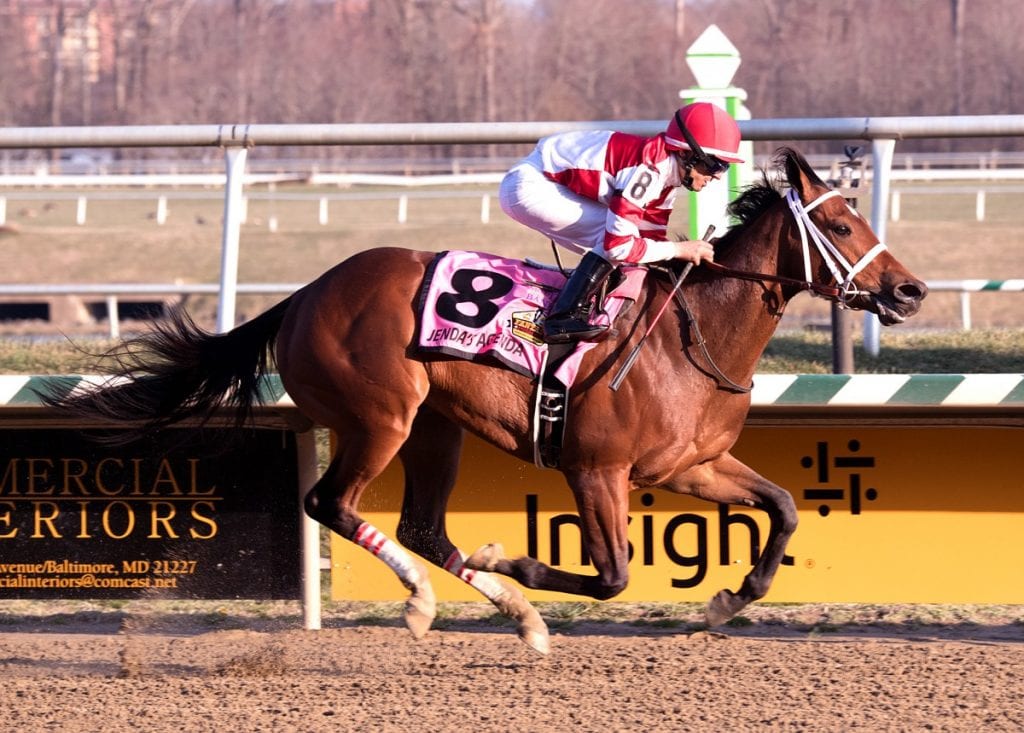 Her career didn’t get under way until the first week of January, but so far Jenda’s Agenda has done nothing wrong. The undefeated filly will look to stretch her speed and talent even further in Saturday’s $125,000 Weber City Miss at Laurel Park.

Bred by trainer Larry Jones and his wife, Cindy, who sold an ownership share to Rick Porter’s Fox Hill Farms following her Jan. 7 unveiling, Jenda’s Agenda is three-for-three in her young career. She opened with a pair of wins at the Fair Grounds over the winter and followed up with a two-length triumph in the one-mile Caesar’s Wish March 18 at Laurel, her stakes debut.

Making her win even more impressive was the fact that Jenda’s Agenda was unable to train much for the race, having been mostly confined to the barn due to cold temperatures that greeted Jones’ stable on its return to Delaware Park from New Orleans.

“She ran very, very well. The thing about that race, I was just awful proud of surviving it. We had shipped her out of New Orleans and that filly had only been able to go to the track one day out of 12,” Jones said. “She had been hung in the barn just having to shed row for that, so I was just awful proud to get out of that race in one piece and with a victory.

“She’s done well. We’ve had five weeks now to kind of get prepared for this so we think we got her back up and ready to go,” he added. “Any time you trade tracks you do all kinds of things and you just can’t really get into full mode of training for a little while. We’re happy right now. She had a really good breeze the other day and all is good.”

Current winter-spring meet-leading rider Trevor McCarthy replaces regular rider Gabriel Saez aboard Jenda’s Agenda, who has led at nearly every call through her first three races, though Jones said it has been more a matter of circumstance than necessity.

“She’s just fast. Actually in [the last race] we were third there for a little while until Gabriel kind of tucked over behind them and came on up in there,” Jones said. “He had an opportunity to get up between horses and kind of split, when he saw it was going to get tight when the outside horse started easing down to crowd her and race-ride her a little bit. He just let her out a notch to get out of any trouble. She’ll do whatever you tell her to. This filly is pretty push-button. So far she’s answered all the questions that we’ve asked of her.”

Equine Prep’s Star Super is the most experienced filly in the Weber City Miss with eight previous starts, the last six of them in stakes, winning the Marshua Jan. 21 and finishing second in the Gin Talking and Smart Halo, all at Laurel, and third in the Sorority last fall at Monmouth Park.

“When you have a 3-year-old filly like that that’s got some experience it’s definitely an advantage. She’s plenty fit and she’s been to battle a few times and I think that always helps,” trainer Cal Lynch said. “She’s been training great and she just had a beautiful work here [Tuesday] morning and did everything well within herself. We’re cautiously optimistic she’ll run well.”

Unlike the Caesar’s Wish, where he directed McCarthy to keep Star Super off the pace, Lynch said he will give jockey Sheldon Russell the green light to ride the Weber City Miss as it comes up.

“It was her first time going a mile, for me anyway, and she’s a free-running filly. We probably would have been better off leaving her alone and letting her go along instead of trying to make her rate,” Lynch said. “We’ll probably let her be a little happier and do what she wants to do. She’s not one that wants to be told what to do all the time.

“She just wants to be left alone and do her own thing and we tried to make her sit in behind and the pace scenario with a small field like that. It ended up where everybody wanted to do the same thing,” he added. “We’ll kind of let her go along a little happier this time and let her dictate whatever she wants to do and hope for a better outcome.”

Sumaya U.S. Stable’s Lights of Medina, an impressive maiden winner at Laurel March 25, is entered to make her stakes debut in the Weber City Miss. Trained by Todd Pletcher, she was heavily favored last time out in a one-mile maiden special weight, her fourth start and first at Laurel.

“We were pleased with it. She’s a filly that we’ve always felt like had some real potential, and it was just a matter of kind of getting her stretched out a little bit. I think eventually down the road she’s a filly that will appreciate plenty of distance,” Pletcher said. “It’s a little bit of a step up going from a maiden to a stake but she’s got a pretty good foundation of races underneath her for that.

“It seems like plenty of horses go there and run well over it the first time,” he added. “I think in her case having the race over the track there does help and put her into a position to move up into a stakes race.”