Castrenze out of breath, but glad to be back 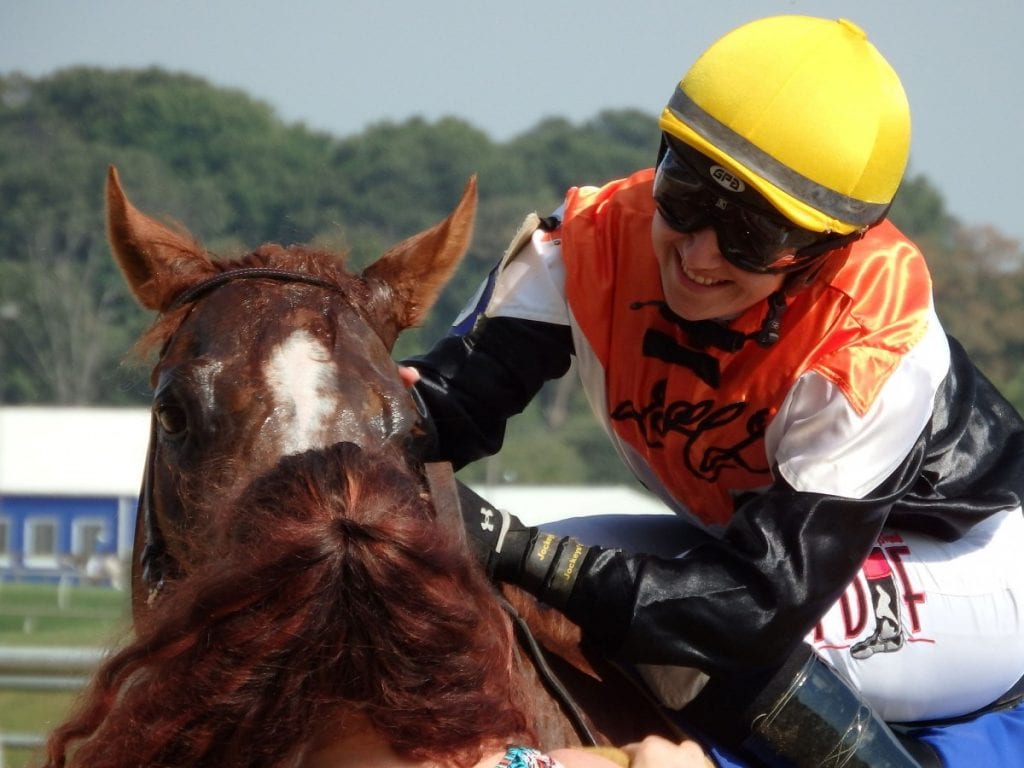 Ashley Castrenze smiles and pets her mount after winning the 2016 Laurel Futurity aboard Caribou Club. Photo by The Racing Biz.

Friday she had good reason to be. For the first time since last October 16, she’d ridden a horse in a race.

On that fall day, her mount, Cats Serenade, had broken down in a nasty, chain-reaction spill on the turf at Laurel Park.

On Friday, by contrast, she had ridden Kieron Magee trainee Minor Legend to a rallying third in a Maryland-bred allowance race.

It had been a long road back for the 20-year-old.

“I’m definitely excited to be back,” she said after the race. “It’s just going to take me a while to get back to where I was.”

In fact, the road back to racing had been longer than she’d expected.

She returned to work in late January, galloping horses in the mornings for Magee, among others, but that’s not quite the same as what happens in the afternoon.

On Friday, Castrenze had just the one mount. Four wide on the turn, she came wider and rallied for the show spot. She had five more mounts scheduled for Saturday, for four different trainers, Magee among them.

Castrenze set the racing world on its ear when she debuted. She won the first four races of her career and six of her first seven. In September, she recorded her first ever stakes win when she guided Caribou Club to a narrow score in the Laurel Futurity.

Just a month later, though, she suffered the rib injury that’s kept her out of action these long months. She’ll still have her bug — the five-pound apprentice allowance — for seven more months. But though she thinks it’ll take a while to get back to where she was, Magee, for one, isn’t worried.

“It’ll come to her. A couple races from now she’ll be fine,” said the Pimlico-based trainer. “She probably will be the top bug rider around here. This is my girl.”