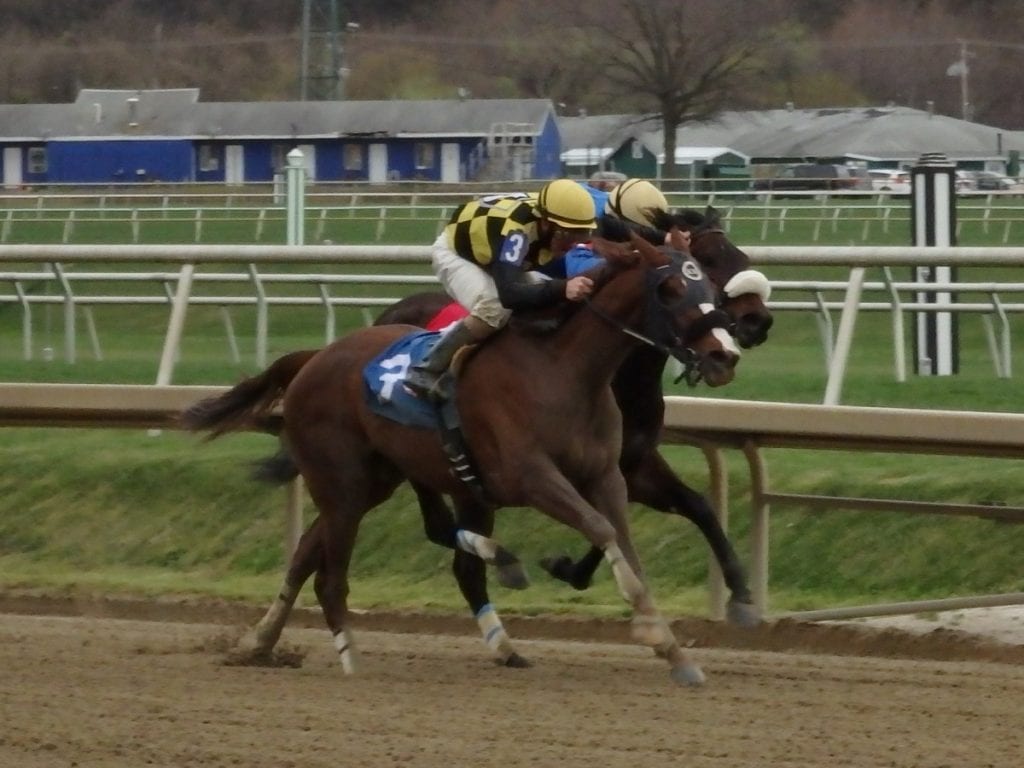 Faze the Nation inched past Le Weekend to win an allowance at Laurel Park today. Photo by The Racing Biz.

Call her a Laurel lover. Call her a warhorse, too.

And you can call Faze the Nation an allowance winner after today’s eighth race at Laurel Park. The three-year-old Cal Nation filly took a Maryland-bred allowance for fillies and mares three and up today, zipping six furlongs in 1:10.77 to win by three-quarters of a length.

It was her fifth win in the last six starts, fifth in 10 starts overall, and fifth in eight tries at Laurel Park. It pushed her earnings to nearly $125,000.

It was also her first win for trainer Kieron Magee. Magee claimed her two races back for owner Jim Wolf for $25,000.  He wheeled her back in a similar state-bred allowance, when, as the 7-5 favorite, she coughed up a two-length lead in the late stages to finish second by a neck.

Today, under regular pilot Steve Hamilton, Faze the Nation enjoyed a perfect inside trip while tracking the early speed of second choice Le Weekend. Hamilton and Faze the Nation skimmed the rail through the turn while always in striking distance, tipped out into the two-path in the lane, and wore down Le Weekend to earn the victory. Le Weekend held second, four lengths clear of Sommer Something in third.

Faze the Nation returned $4.80 to win as the 7-5 choice, the fourth consecutive race in which she has gone off as the favorite. The exacta was good for $18.60.

Faze the Nation was bred in the Free State by Linda Walls, who owned her for her first eight starts — and four wins — before losing her via the claimbox.