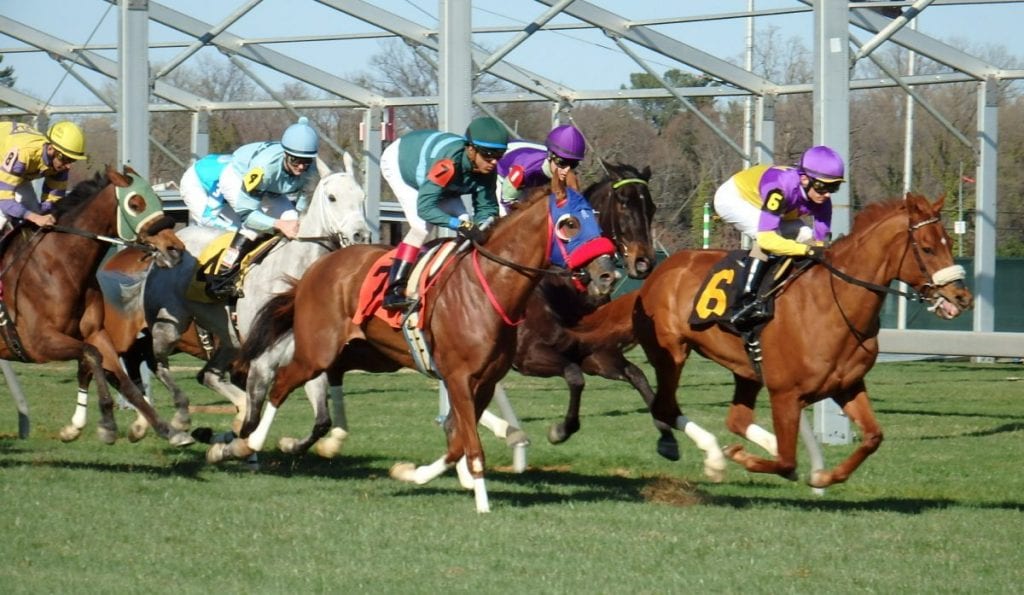 Horses racing on the grass at Pimlico. Photo by The Racing Biz.

Does horse racing have an environmental contamination problem? Or does the problem lie elsewhere?

It’s a question worth pondering after the Maryland Racing Commission — for at least the fourth time in less than 18 months — confronted a case in which a trainer whose horse was found to be in violation of the state’s medication rules claimed to have been the victim of environmental contamination.

Last Thursday, at its monthly meeting, the Commission upheld a stewards’ decision to disqualify Early Grey from a June 25, 2016 victory at Pimlico Race Course after Truesdail Laboratories, the state’s drug-testing lab, found the presence of desvenlafaxine in the horse’s system. But it declined to impose additional penalties.

Desvenlafaxine, an anti-depressant marketed as Pristiq and under other brand names, is prohibited in racehorses and almost never found in them; the Racing Medication and Testing Consortium found only a half-dozen desvenlafaxine positives worldwide in 2014.

“He didn’t know what drug I was talking about,” administrative steward Adam Campola testified Thursday. “He said he’d never heard of it.”

Day, who said that he’s been training for “26 or 27 years,” has no medication violations listed in the Thoroughbred Rulings database. He said that, when questioned, his employees said they had not administered the medication to the horse; “nor did I,” he added.

Desvenlafaxine carries a “Class A” penalty, which, under Maryland rules, which mirror the national uniform medication program, necessitates a stiff penalty: on top of the disqualification, the recommended penalty, “absent mitigating factors,” is a $10,000 fine and a one-year suspension. It also slaps the trainer with six multiple medication violation points.

In this case, the state stewards had ruled to disqualify Early Grey from the race and from all purse money. But they did not impose any of the other recommended penalties, instead referring the case to the Commission “for whatever action they deem appropriate.”

“We didn’t believe” that Day had administered the drug, Campola testified. That, coupled with his previously spotless record, led the stewards to believe that additional penalties, including six multiple medication violation points, would be too severe.

It was the second time in 2017 that the Commission had heard an appeal of a claimed environmental contamination case. In January, it had voted to uphold the disqualification of Mike Trombetta trainee Struth, found to have carried clenbuterol in his system in a runner-up effort in allowance company at Laurel Park.

In 2016, the Maryland and Delaware commissions each faced a spate of glaucine positives in their respective jurisdictions. The commissions, working with Truesdail, arrived at a test to determine whether the presence of glaucine — a naturally-occurring alkaloid found in the tulip poplar tree that reportedly has bronchodilator and anti-inflammatory and thus potentially performance-enhancing effects — was the result of purposeful administration or environmental contamination. All of the more than a dozen cases, which largely occurred last spring, were ruled to be contamination.

And in late 2015, the Maryland Racing Commission upheld its stewards decision not to disqualify Corvus after that runner had won the Maryland Million Nursery but was found to have had the then-prohibited vasodilator isoxsuprine in his system — a medication whose presence, according to trainer Katy Voss and her veterinarian, Dr. John Sivic, must have been environmental contamination or an accidental “one-time dose.”

Thursday, Day’s attorney, Frank Petramalo, who also is the executive director of the Virginia Horsemen’s Benevolent and Protective Association, sought to convince the Commission that “the only conclusion that you can draw is that [the desvenlafaxine] came from someplace else.”

What’s more, she argued, were Early Grey the victim of environmental contamination, one would expect other horses to have come back with similar test results; none did.

“This is a prohibited drug, plain and simple,” she told the Commission. “Therefore, sanctions are required.”

To some extent, Petramalo was successful. While it upheld the disqualification — costing owner-breeder Morgan’s Ford Farm the $17,100 winner’s share from the race, which was a maiden special weight for Virginia-bred or -sired horses — the Commission chose not to impose on Day any suspension or additional fines.

Because the state’s current rules permit no flexibility in imposing multiple medication violation points, the Commission had no choice but to enforce the full six-point penalty. But earlier in the same meeting, the Commission had adopted regulations, expected to be operative within two months, permitting itself the flexibility to modify point penalties; Commission counsel Eric London said in announcing the ruling that, once the new regs are operative, “The Commission will consider a request for reconsideration.”

Petramalo said that Day would “absolutely” request a reconsideration once the new regulations are active, and Commission chairman Michael Algeo suggested the Commission was likely to give such a request serious consideration.

“We believed Mr Day. We believe he didn’t have any involvement himself in the administering of that drug. He’s got a wonderful record and did a wonderful presentation,” Algeo said. “Quite candidly, I akcknowledge that we didn’t think that six points under these circumstances was appropriate, but we were bound by that, and then we’ll see what happens if he files a motion.”