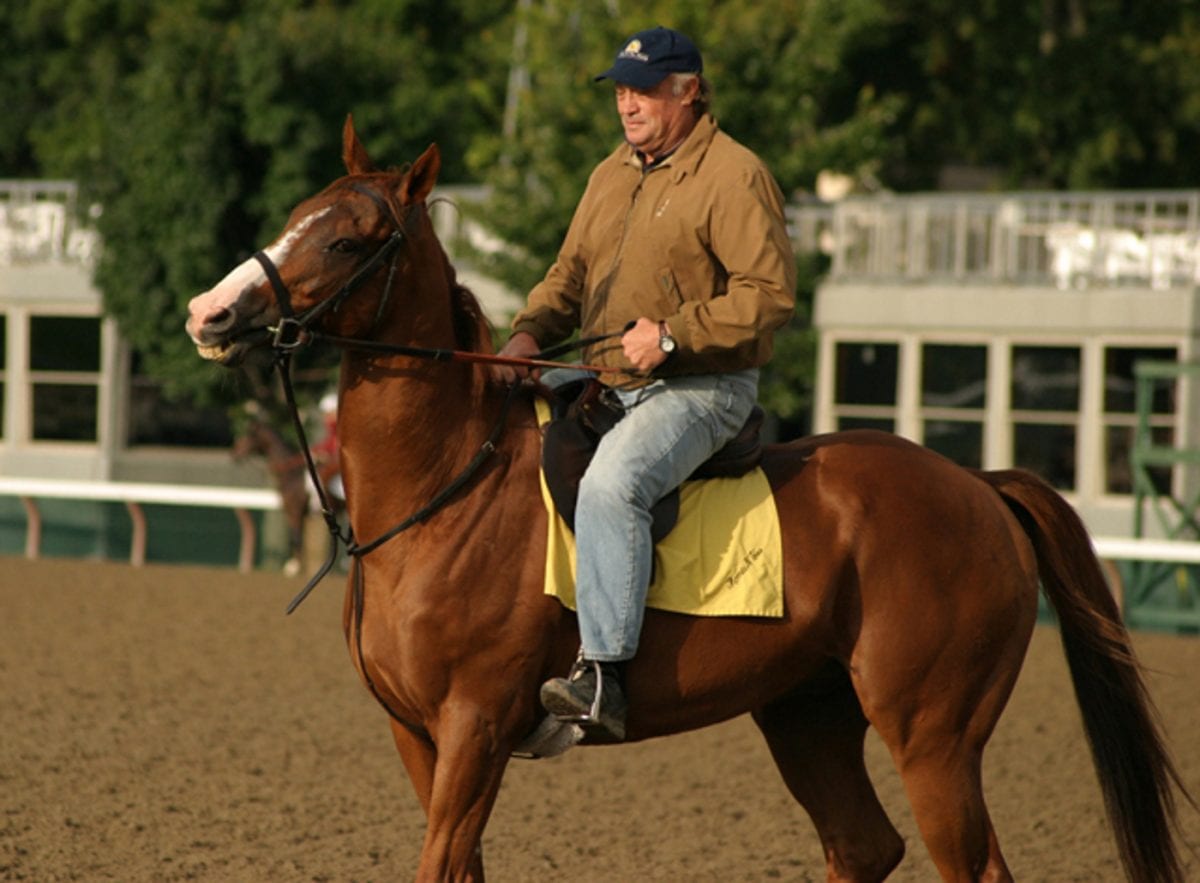 Two years ago, the National Museum of Racing and Hall of Fame induction ceremony was a Maryland-style celebration. That year, trainer King Leatherbury, a Marylander through and through, the Maryland-based sprinter Xtra Heat earned their way into the Hall.

Maybe it’s time to get the band back together, because this year’s event will have no less of a Maryland feel.

Maryland-bred Good Night Shirt, the Eclipse Award winner for Champion Steeplechase Horse in 2007 and 2008, and the late Thomas H. Voss, like Leatherbury a Marylander through and through, as well as a five-time National Steeplechase Association leader in wins and a three-time leader in earnings, have been elected to the National Museum of Racing and Hall of Fame by the Museum’s Steeplechase Review Committee.

Good Night Shirt and Voss will be inducted into the Hall of Fame on Friday, Aug. 4 at 10:30 a.m. in a ceremony that is open to the public and free to attend at the Fasig-Tipton sales pavilion. The Hall of Fame’s 2017 contemporary inductees and Pillars of the Turf selections will be announced at a later date. The Steeplechase Review Committee meets once every four years to consider candidates. In 2013, the racehorses McDynamo and Tuscalee were inducted via the Steeplechase Review Committee.

Bred in Maryland by Dr. and Mrs. Thomas Bowman, Good Night Shirt (Concern—Hot Story, by Two Punch) was owned for the majority of his career by Harold A. “Sonny” Via, Jr., and trained by Jack O. Fisher. Good Night Shirt joined Fisher’s barn in 2005 after beginning his career as a flat racer. He went on to win 10 graded stakes races, including eight Grade 1s.

In his 2008 Lonesome Glory victory, Good Night Shirt set a Belmont Park track record of 4:24 for 2½ miles over jumps. He received 168 pounds in the National Steeplechase Association Theoretical Handicap in 2008. Only Lonesome Glory was given a higher impost (170 pounds in 1995) among annual highweights in NSA history. The NSA Theoretical Handicap has been in place since 1992.

As an 8-year-old, Good Night Shirt began his 2009 season with a victory in the Grade 2 Carolina Cup — securing his 10th career graded stakes win — before finishing second in the Iroquois. He was then retired because of an ankle injury with a career record of 14-5-3 from 33 starts and earnings of $1,041,083, joining Lonesome Glory and McDynamo as only the third steeplechaser to surpass $1 million in career earnings. Good Night Shirt is also in the elite company of Lonesome Glory, Zaccio, Mistico, Moonstruck and Alajmal as the only horses to win both the Carolina Cup and Colonial Cup in their career.

Voss trained 2010 Eclipse Award winner Slip Away, winner of the Colonial Cup and Temple Gwathmey that year. Slip Away turned heads with his early speed in jumping events, often taking his rivals all the way in the marathon events. He sealed his championship with a powerful performance in the Grade 1 Colonial Cup, winning by nearly 26 lengths.

In his youth, Voss successfully rode over timber fences and subsequently launched his career as a trainer in his native Maryland. He won his first steeplechase race as a trainer in 1975 with Aruhapy at Monkton, also riding the winner.

Voss won a total of 10 Grade 1 races in his career and 30 overall graded stakes. He also served on the National Steeplechase Association’s Board of Directors and was the NSA’s secretary in 2013.

Voss died in 2014 at the age of 63 of an apparent heart attack. He was Joint Master of the Elkridge-Harford Hunt Club, and he and his family had long been involved in land preservation in the My Lady’s Manor area, eventually placing around 1,000 acres in preservation easements.

At the time of his passing, area horsemen remembered Voss as “gruff” but possessing a “heart of gold.”