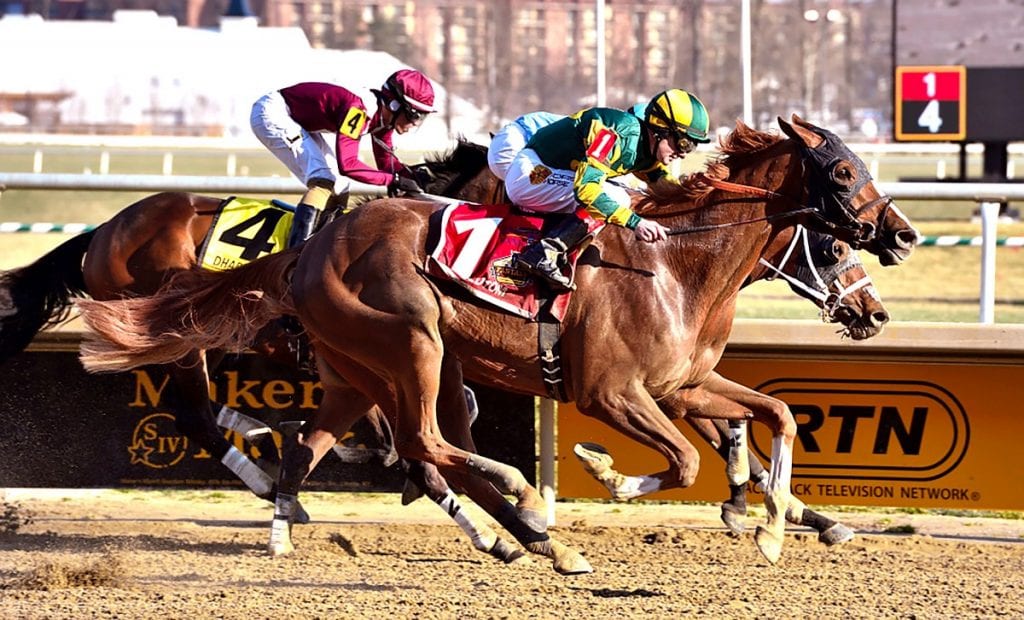 Cobra Farm Inc.’s Twisted Tom, facing stakes company for the first time in his Maryland debut, came with a steady drive down the middle of the track to catch heavy favorite O Dionysus at the wire in Saturday’s $100,000 Private Terms at Laurel Park.

The 28th running of the Private Terms for 3-year-olds and the 29th running of the $100,000 Caesar’s Wish for 3-year-old fillies, both at about 1 1/16 miles, were among five stakes worth $425,000 in purses on an 11-race Maryland Jockey Club Celebration Day program that also included the inaugural Fantasy Owners Day.

Making his first start outside New York under jockey Feargal Lynch, Twisted Tom ($10.20) hit the wire in 1:45.68 over a fast main track to win by a nose, his second straight victory since being moved to the barn of trainer Chad Brown.

“I was very pleased with his performance,” Brown said by text from Gulfstream Park in Hallandale Beach, Fla. “It was also a great ride. He never gave up on him.”

Lynch was unhurried racing in fourth as Frank Whiteley Jr. Stakes winner High Roller took the field of seven sophomores through an opening quarter-mile in 24.11 seconds and ran a half in 48.97, tracked closely by Hashtag Alex and Dharmaster as O Dionysus lagged behind them in last.

Dharmaster, a 16-1 long shot, assumed the lead as the group rounded the far turn while O Dionysus began to make his bid three wide and loomed a threat straightening for him, taking over after six furlongs in 1:14.08. Lynch followed with his own move on the far outside and set down for the drive at the head of the lane.

“It was very close, but my horse was finishing fast,” Lynch said. “Mr. Brown said, ‘Listen, he’s not going to make up six lengths but luckily there was enough pace and they came back to us. When he switched leads and I got him to the outside and there was no kickback, he got it rolling.”

O Dionysus, a multiple stakes winner making his first try around two turns for trainer Gary Capuano, began to edge clear of a stubborn Dharmaster along the rail in mid-stretch but didn’t have enough left to hold off Twisted Tom’s late run, losing the last bob. He was a half-length ahead of Dharmaster in third, followed by High Roller, Greek Prince, Hashtag Alex and No More Talk.

“He just kind of ran evenly through the stretch. He dug in and put the horse on the inside away and the horse on the far outside just came and nipped him at the wire,” Capuano said. “He ran a good race. He didn’t see the other horse, obviously, but it is what it is.

“He ran a good race,” he added. “He stayed out of trouble and made a nice move around the turn. It looked like he did what he needed to do and turning for home it looked pretty good, and right at the end you could see that horse coming quick. The wire was just where it was.”