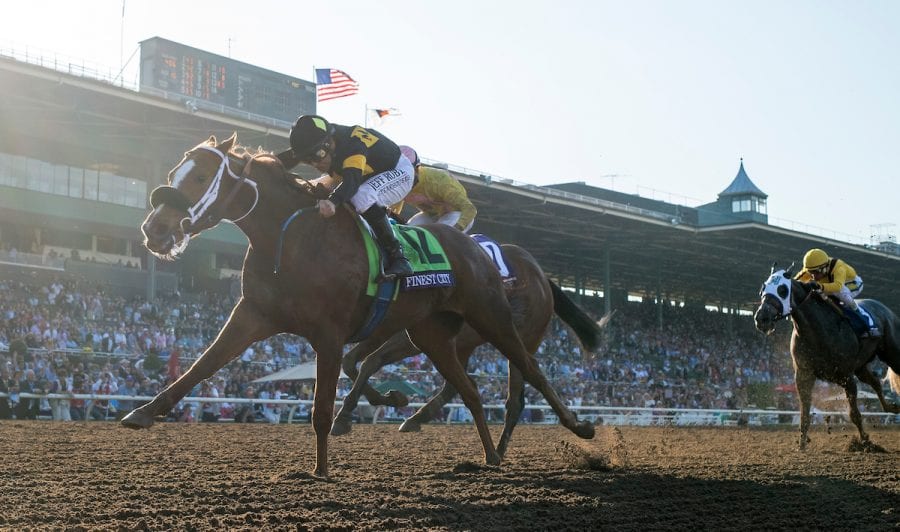 Here’s how deep the current crop of Midlantic-breds is: the leading older horse in the Mid-Atlantic Thoroughbred/The Racing Biz Top Midlantic-bred Poll, released today for the first time in 2017, is a defending Eclipse Award winner and Breeders’ Cup champion.

And the top two horses in the three-year-old version of the poll are on everybody’s short list for top sophomore colt and filly in the nation.

In the first poll, complete through last weekend’s racing, Finest City was the clear winner among older horses, while Irish War Cry and Unique Bella were head-bobbing at the wire for sophomore honors, with the former up narrowly.

New Jersey-bred Irish War Cry narrowly earned the decision over Unique Bella among three-year-olds. He is a son of Curlin out of the Polish Numbers mare Irish Sovereign. Though perhaps a bit later to the races than some of his contemporaries, Irish War Cry certainly hit the ground running: he broke his maiden at first asking at Laurel Park and followed that up with a narrow score over O Dionysus in the Marylander Stakes to conclude his two-year-old season.

In his sophomore debut, Irish War Cry delivered a boffo performance, cruising to an easy win in the Grade 2 Holy Bull at Gulfstream Park against a field that included graded stakes winner Gunnevara and 2016 Breeders’ Cup Juvenile winner Classic Empire.

Irish War Cry was bred in the Garden State by his owner, Isabelle de Tomaso. She is a daughter of Monmouth Park cofounder — and Haskell Invitational namesake — Amory Haskell. Irish War Cry is trained by Graham Motion.

Meanwhile, among older horses, Finest City picked up just where she left off in 2016.

The five-year-old Pennsylvania-bred mare scored an upset in last November’s Grade 1 Breeders’ Cup Filly and Mare Sprint to conclude her season, in the process earning an Eclipse Award as champion female sprinter. She returned to action with her running shoes on, posting a dominant win in the Grade 2 Santa Monica Stakes at Santa Anita January 21.

Finest City is a daughter of City Zip out of the stakes-placed Lemon Drop Kid mare Be Envied. She was bred in the Keystone State by HnR Nothhaft Horseracing, LLC, which sold her at auction as a weanling. Pinhooked at the following September’s Keeneland Yearling Sale, she fetched a winning bid of $85,000 from her current owner, Seltzer Thoroughbreds. She is trained by Ian Kruljac.

Of the 10 horses on the twin lists, five were bred in Pennsylvania, including four of the five older horses.  Three were bred in Maryland, and two were bred in New Jersey. The list includes seven males and three females.