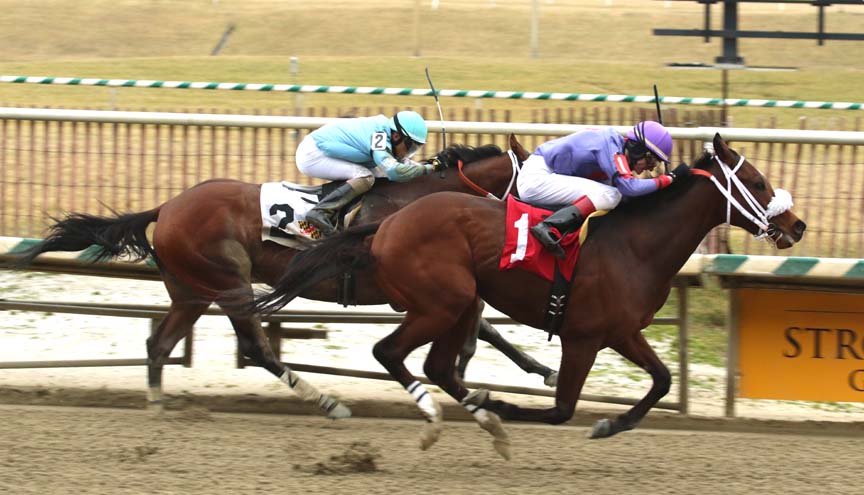 A pair of three-year-olds that have already made a mark locally will try to solidify their positions atop the local sophomore class at Laurel Park Saturday. But in both cases, they figure to have their hooves full.

In the $75,000 Wide Country, for three-year-old fillies, the lukewarm favorite, at 5-2, is undefeated Crabcakes. One race later, O Dionysus is 8-5 on the morning line in the Miracle Wood, the first of three sophomore stakes — followed by the Private Terms and the Tesio — leading to the Preakness.

Trained by Penn National-based Bernie Houghton for his aunt, Buckingham’s 78-year-old ‘Binnie’ Houghton, Crabcakes broke her maiden by five lengths Dec. 3 at her home track then came back a week later to win the Maryland Juvenile Filly Championship going seven furlongs at Laurel.

In her 3-year-old debut, the dark bay or brown daughter of Great Notion took the lead after a half-mile and sizzled to a 6 ¼-length romp in a six-furlong optional claiming allowance Jan. 7 at Laurel. Only Lucky in Malibu, second in the Maryland Juvenile Filly Championship, returns from the past two starts to face Crabcakes.

“She’s kind of popular, this Crabcakes, isn’t she? It must be the name I guess,” Bernie Houghton said. “I’m expecting a nice effort. I don’t think distance is a problem at all. I would be disappointed if she didn’t run a great race, actually. She’s coming into the race right. I’m hoping that I did the right thing by taking care of her and spacing her out a little bit. Her career started bang-bang real fast and I want to take care of her if I can.”

Despite the ease of Crabcakes’ allowance win, Houghton decided to pass on the six-furlong Marshua Jan. 14 at Laurel and point for the Wide Country, where she drew Post 2 in a field of eight at topweight of 122 pounds, giving six pounds to each of her rivals. Crabcakes was originally entered to debut Nov. 20 at Laurel until the card was postponed due to high winds.

“She’s doing great. I skipped this last stake just because her schedule got off whack. I went down for her maiden race and it got scratched because of the wind and I didn’t get a chance to run her, so I stuck her in at Penn National just to kind of get a race under her,” Houghton said. “I whipped her back a week later in the stake and then I saw a nice allowance race just to try to get some experience in her. I decided it was too close to go in that other stake so I skipped that one to get her ready for this one. She had a nice work last Saturday and hopefully she’ll be ready.”

But don’t expect this one to be easy. Though the only stakes winner in the group, Crabcakes will have to contend with several runners who are stakes-placed, chief among them China Grove (3-1) and Lucky in Malibu (4-1).

Katherine Ball’s China Grove will be making her ninth start and seventh in a stakes in the Wide Country. She was most recently sixth in the Golden Rod (G2) Nov. 26 to cap a juvenile campaign that saw her win her spring unveiling and run second in the Astoria at Belmont Park and Rags to Riches at Churchill Downs, the latter at one mile.

ZWP Stable and Non Stop Stable’s Maryland homebred Lucky in Malibu has hit the board in three consecutive stakes. After coming within 1 ¼ lengths of Crabcakes at Laurel, she was third in the seven-furlong Gin Talking and second by a neck to Star Super in the Marshua.

Rounding out the field are Follow the Petals, unbeaten in two starts and making her stakes debut; Forever Liesl, a 5 ¼-length maiden winner at Laurel Dec. 31; multiple stakes-placed Kathleen Elizabeth and Squan’s Kingdom; and So Fancy, who broke her maiden over Turfway Park’s synthetic surface Dec. 30.

The Wide Country is race six. One race later, seven rivals are set to try to knock off favored O Dionysus (8-5) in the one-mile Miracle Wood Stakes.

Marathon Farms Inc.’s O Dionysus has run second in back-to-back seven-furlong stakes at Laurel, the Marylander Dec. 31 to subsequent Holy Bull (G2) winner Irish War Cry and the Whiteley, beaten less than a length combined.  In the former, he and Irish War Cry were head-bobbing at the wire; in the latter, a bad trip delayed his menacing run until it was too late.

Trained by Gary Capuano, O Dionysus won the 6 ½-furlong Christopher Elser Memorial Nov. 12 at Parx and has never finished worse than fourth in seven starts, that coming after a rough trip in the Maryland Juvenile Futurity Dec. 10.

The horse who beat him in the Whiteley, High Roller (5-2), is another who figures to get plenty of attention from the bettors.

Louis Ulman and Stephen Parker’s High Roller was a gutsy winner in the seven-furlong Frank Whiteley Jr. Jan. 21 at Laurel, just the High Cotton colt’s fourth start, first as a sophomore and first beyond six furlongs.

Prior to that he made two starts at 2, cruising by 3 ¼ lengths in his debut and finishing third in the James Lewis III behind El Areeb, who has gone on to be a multiple Grade 3 winner and a leading contender on the Triple Crown trail.

“Pretty much he impressed me because he hadn’t been that far yet,” trainer Dale Capuano, Gary Capuano’s older brother, said. “We thought he’d be able to handle that distance but down on the rail, he was head and head for the lead, he dropped back a little bit and fought pretty game. I don’t think the rail was the best part of the track that day, either. He showed that he had a little bit of depth to him.”

Though High Roller took the lead into the stretch in his most recent start, Capuano feels the High Cotton colt may be better making one run. He ran seven furlongs in 1:23.86 in the Frank Whiteley.

“He likes to run at horses, so I think to have him off the pace is better, but he can go either way. He does break well and can get good position,” he said. “He has speed; the last time he was head and head for the lead and they went the first quarter in [23.15 seconds], so he finished up pretty good. Going seven-eighths in 23 and change wasn’t a bad time for the day, I don’t think.

“He’s definitely a decent kind of horse. It just remains to be seen how far he’s going to go,” he added. “We’ll find out. The one-turn mile is a difficult kind of race for a lot of horses so we’ll have to see how he’ll handle that. Pretty soon we’ll try him two turns and see what happens.”

Also entered are Everybodyluvsrudy, up the track in the Grade 3 Jerome after breaking his maiden at Aqueduct in his fifth career start; Butch Walker, third in successive sprint stakes including the Whiteley; Eastern Bay, fourth in the Whiteley in his stakes debut; stakes-placed Indominus Rex; recent Laurel maiden winner No More Talk; and Poseidon’s Prize, a winner of two straight starts at Charles Town by 10 ¼ combined lengths.