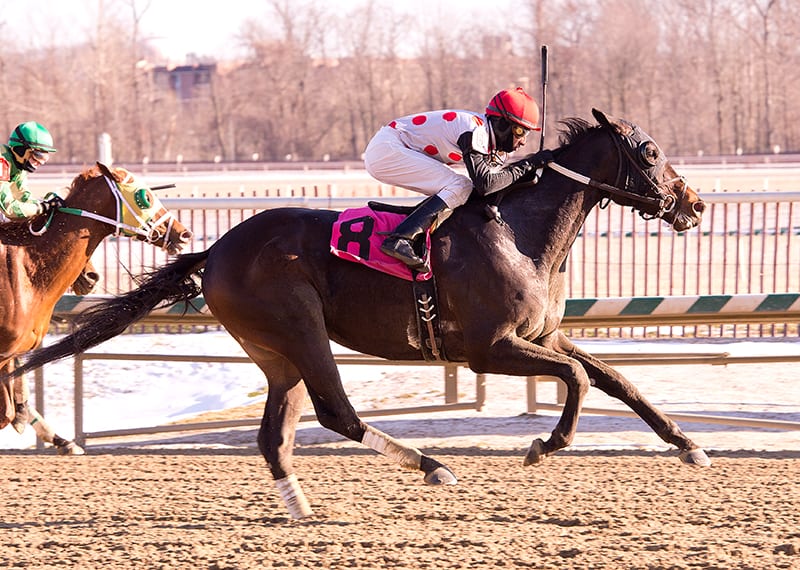 The $75,000 Maryland Racing Media Stakes for fillies and mares four and up going 1 1/16 miles will be contested as race five on the 10-race card. The John B. Campbell, at 1 1/8 miles for four-year-olds and up, is race eight.

In the first of those, Winter (4-1) is gunning for a third straight win, second in stakes company.  But the question on bettors’ minds is more likely to be: Is Wait Your Turn (3-5) all that?

A 4-year-old Warrior’s Reward filly that has won three of four lifetime starts for trainer Rudy Rodriguez and is making her Laurel and stakes debut, Wait Your Turn ran twice at 2, posting a 14-1 shocker in her unveiling and coming within a half-length of next-out stakes winner Karen’s Silk her first time facing winners.

She didn’t race again for 10 months, returning to beat older horses in back-to-back starts in New York by 10 ¼ combined lengths, both in front-running fashion. In the first of those, she narrowly defeated Tale for Ruby, who took the jaunt from New York down I-95 to win the Safely Kept Stakes late last year over the Laurel Park surface.

“She looks like she’s a very nice filly. She’s had a lot of issues, but she always tries hard,” Rodriguez said of his charge. “She looks like she’s coming along good. She’s never run a bad race. The last race she was really, really impressive. She just drew away, and the fractions were pretty solid, too. We’re going to take a chance in there and hopefully she shows she’s a good horse.”

It will be the first stakes appearance for Wait Your Turn.

The same cannot be said of Winter, however, who earned stakes laurels last out with a perfect-trip score in the Nellie Morse Stakes.

Winter joined trainer Cal Lynch’s barn following a second-place finish last fall in a Delaware Park allowance. Since then she won a Penn National allowance, was second in an optional claiming allowance there behind New York shipper Flick of an Eye and won a similar spot at Laurel to open her 2017 season on New Year’s Day.

“Mentally she’s just gotten so much confidence from her first race when she won at Penn National for us,” he added. “She came back and ran into that tough filly at Penn National, but the last race here was dynamite. We expect her to keep progressing. I don’t think we’ve seen the best of her yet.”

Also slated to face the starter are the second- and third-place finishers from the Nellie Morse, in the form of Addibel Lightning (10-1) and Moon Virginia (15-1).

Three races later, the first question is: whither the favorite?  Page McKenney, 2015 Campbell winner (and 2016 Grade 3 General George champ), is the 2-1 morning line favorite. But trainer Mary Eppler has been on the fence about whether to start her star there or in the General George on the same day.

If she chooses the George, favoritism is likely to fall to either Souper Lucky (5-2) or Turco Bravo (3-1).

Trained by Gary Contessa, who purchased the Group 1-placed gelding in Chile in 2014 and imported him to the U.S., Turco Bravo is making his third career start at Laurel. He ran fifth in the 2014 Richard W. Small and second in the 2015 Native Dancer in previous local stakes attempts.

The multiple stakes-winning distance specialist, given time off after developing stiffness and cramping in behind following the Birdstone, ran third in the 1 ¼-mile Excelsior (G3) and second in the 1 ½-mile Brooklyn (G2) last year in addition to winning the 1 1/8-mile Stymie for a second straight year as well as the Flat Out at 1 3/8 miles.

“He’s coming back for another year. I wanted to get another race into him before the Stymie, and the timing is perfect,” Contessa said. “I’ve pretty much had uninterrupted training with him. If you want to train in the winter you have to watch the weather and we managed to duck all the major snowstorms and get all the work we needed into him.

“I don’t think he needs a race,” he added. “I think he’s ready to run and the timing, the distance and the race, everything is perfect for him. It’s the perfect storm, having this race on Saturday.”

Also coming off the bench in the Campbell is Live Oak Plantation’s Grade 3-placed Souper Lucky, racing for the first time since being nosed to second as the favorite in a one-mile Parx allowance last March. The 6-year-old gelding ran only twice last year, finishing second by a half-length to Kid Cruz in the 2016 Campbell.

Souper Lucky has earned six of his seven lifetime wins from 11 lifetime races at Laurel, with one second and two thirds. The Campbell will be his 26th career start.

“He was heading in the right direction and doing good and then he had some setbacks that required some time, which we gave him. It’s time to get him started again,” trainer Mike Trombetta said. “I don’t know what it is about Laurel but his record has been pretty darn good there so it’s a place where I want to run him, for sure. He’s run with some nice horses. If he’s doing well, he certainly should make a decent showing.”