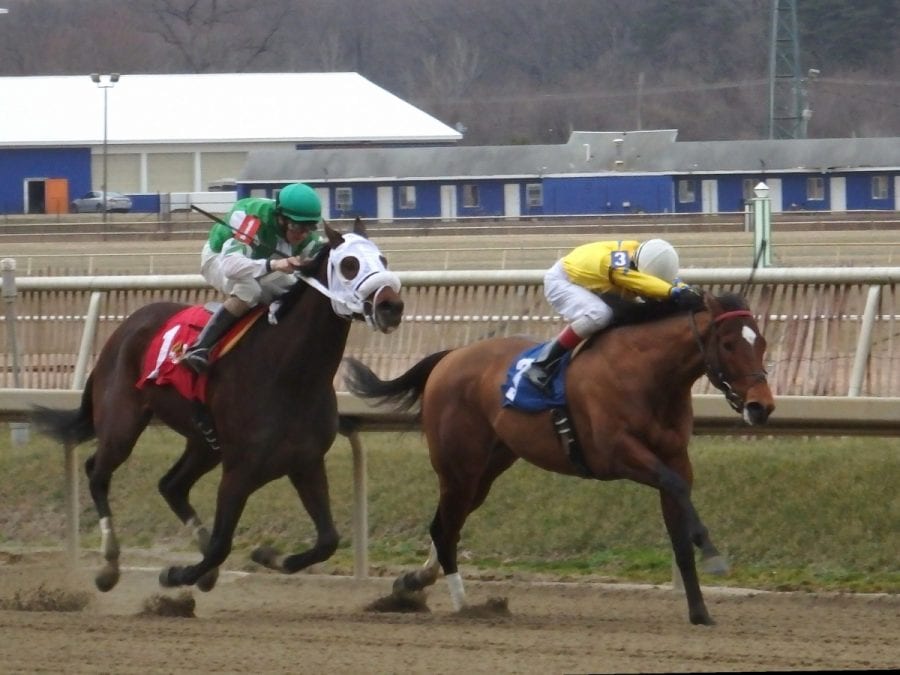 Johnny Hop (inside) held off Honor the Fleet to win at first asking this afternoon. Photo by The Racing Biz.

Johnny Hop, a 3-year-old son of Bodemeister who sold for $350,000 at the Ocala Breeders’ Sales Company March Sale of 2-year-olds, gamely held off Honor the Fleet down the stretch to break his maiden at first asking Saturday at Laurel Park.

Owned by Three C Stables, West Point Thoroughbreds and Robert Masiello and trained by Graham Motion, Johnny Hop covered six furlongs in 1:11.01.The Kentucky-bred colt is out of Smarty Deb, a multiple-stakes winner at Emerald Downs who finished fifth in the 2007 Breeders’ Cup Juvenile Fillies (G1).

“He broke really sharp today.” said jockey Trevor McCarthy. “I was surprised. I didn’t think he’d break that sharp and that wasn’t the key. Graham just wanted to see him run a good race. He was in a bit of a hurry there. I would have rather have covered him up and teach him a little something. But he did everything so easy. At top of stretch I was just hand-riding him and he moved up easy on his own. That [Honor the Fleet]…I was working that horse before. When he kind of hooked me I just gave him a little encouragement and he was pretty game for me.”