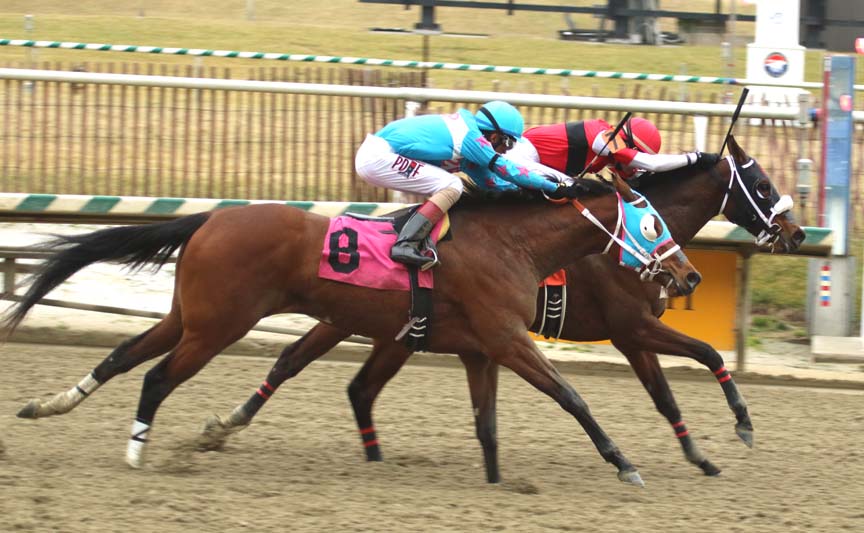 Star Super held off Lucky in Malibu to win the Marshua Stakes. Photo by Laurie Asseo.

The combined margin of the two wins was three-quarters of a length.

In the Whiteley, Louis Ulman and Stephen Parker’s High Roller opened his sophomore season in successful fashion, taking the lead at the top of the stretch and holding off a late bid from favored stakes winner O Dionysus to win the $75,000 test by a half-length.

The sixth running of the seven-furlong Whiteley for 3-year-olds was the first of four stakes worth $300,000 in purses on the nine-race program that included the $75,000 Marshua for 3-year-old fillies and $75,000 Nellie Morse for fillies and mares 4 and up.

The Whiteley was the fourth career start and second in a stakes for High Roller ($12.20), who finished third behind well-regarded subsequent Grade 2 winner El Areeb in the James F. Lewis III Nov. 19 at Laurel. The winning time was 1:23.86 over a fast main track.

“We thought [O Dionysus] was the horse to beat and that’s how it ended up,” winning trainer Dale Capuano said. “We weren’t crazy about the one-hole for him but we thought he’d like going further, which it looked like he did, so it’s all good.”

High Roller broke running from Post 1 under McCarthy and saved ground along the rail as Generous Jack and Blackjack Buster dueled through a quarter-mile in 23.15 seconds and a half in 46.63 with The Great Ronaldo to their outside.

O Dionysus, favored at 2-5 in a field of eight, was keen early but restrained by jockey Jevian Toledo and wound up boxed in behind horses to the final turn. McCarthy began to separate from his rivals after straightening for home and O Dionysus was unable to reel him in after finding room in mid-stretch and wound up second, beaten a half-length.

“He broke really good for me today and he was sharp. I was able to get him back a little bit,” McCarthy said. “I’ve been telling Dale he needs to go seven-eighths. He needs that more [distance] and he’s going to want to go further, big time. I can’t wait to ride him going longer. We’ll see what he’s got.”

Capuano said High Roller would be pointed to the one-mile Miracle Wood Feb. 18 at Laurel.

In the following race, the six-furlong $75,000 Marshua Stakes for three-year-old fillies, Equine Prep’s Star Super, second in back-to-back stakes to end her 2-year-old campaign, rallied after being headed in deep stretch to edge Lucky in Malibu by a neck and earn her first black-type victory.

The win completed a sweep of the 3-year-old races for jockey Trevor McCarthy, who one race earlier took the Frank Whiteley Jr. aboard High Roller.  He would follow the Marshua with a third stakes win, in the Nellie Morse.

Star Super ($3), the 1-2 favorite of eight sophomore fillies, settled in mid-pack behind a quarter-mile of 22.25 seconds set by Scarlett’s Ransom and a half in 46.33 from Unaquoi. McCarthy kept the daughter of 2010 Kentucky Derby (G1) winner Super Saver in the clear racing three wide, and confidently rolled up to take the lead after five furlongs in 58.86.

“I was really happy with the way she broke today. We had a great post position. She was just sitting there third just stalking,” McCarthy said. “She moved out right around the turn and once I got her in the stretch she opened up about one or two [lengths] and was kind of waiting a little bit. As soon as [Lucky in Malibu] came to her, that just pushed her right along. She’s game.”

Lucky in Malibu, 6 ½ lengths behind Star Super while third in the Gin Talking Dec. 31, followed the winner’s move to her outside around the far turn and nearly moved to even terms in mid-stretch but could not get by Star Super, who hit the wire in 1:11.30 for six furlongs.

“I was confident coming into the race. I was a lot more confident this morning than I was at the sixteenth pole, but that’s her. She does like to fight and she was playing a little bit with the field but she’s a very talented filly,” Lynch said. “[Lucky in Malibu] is a very nice filly. In the paddock she was the one I was afraid of. This is a very exciting filly.”

Squan’s Kingdom was third after a slow start, 1 ½ lengths behind Lucky in Malibu. I Am I Will, Ianthe, Unaquoi, Item and Scarlett’s Ransom completed the order of finish.

Lynch said the seven-furlong, $75,000 Wide Country Stakes Feb. 18 at Laurel is a likely next start for Star Super.