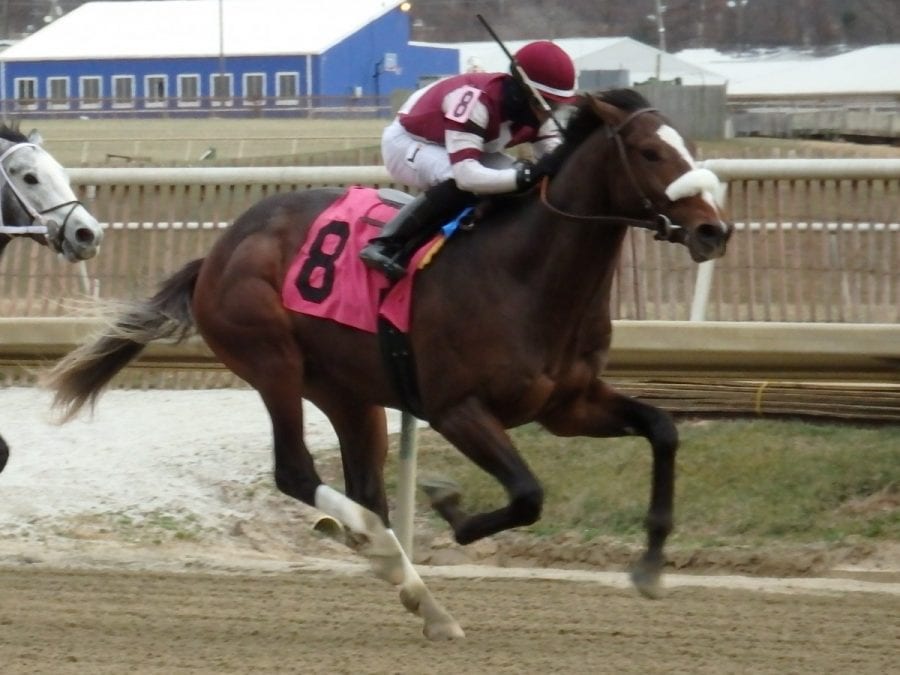 Gunpowder Farms homebred Generous Jack swept to the lead on the outside around the far turn and powered down the stretch for an impressive two-length debut victory Friday at Laurel Park.

With fall meet-leading rider Jevian Toledo aboard for trainer Kelly Rubley, Generous Jack ($7.40) was unhurried running third behind dueling pacesetters Censure and Thats My Fella through an opening quarter-mile in 23.27 seconds.

The bay son of K One King met no resistance as he cruised to the lead following a half-mile in 47.88 seconds, and drew off after straightening for home to finish in 1:14.21 for six furlongs over a fast main track.

Generous Jack had been breezing steadily at the Fair Hill Training Center for his unveiling, recording the fastest work eight times since Oct. 5 over the track’s dirt and all-weather surfaces.

“Those bullets have been easy for him, so we’ve really been looking forward to his first start,” Rubley said. “This horse has been one of my favorites in training all summer long. He showed up like we thought he would.”

Dharmaster closed late to be second, with Thats My Fella third. Censure, a $335,000 yearling purchase by Hillwood Stables that went off as the 2-1 favorite, wound up last of eight.

K One King, whose multiple stakes wins included the 2000 Oaklawn Handicap (G1), ran eighth in the 1999 Kentucky Derby (G1). Generous Jack is out of the Mizzen Mast mare Mizzen Donald, a five-time winner of nearly $160,000. Mizzen Mast was a multiple graded stakes winner on dirt.

“He’s gorgeous,” Rubley said. “We definitely think he’ll go longer down the road but for now, this is all right.”

In Friday’s other $40,000 maiden special weight for 2-year-olds, Momentum Stud’s Maryland-bred Blackjack Buster, making his fourth career start, took the lead with a half-mile to run and was never challenged in the stretch to win in 1:12.68.

Trained by Scott Lake, Blackjack Buster ($11) was coming off a runner-up finish in an Oct. 15 maiden race at Laurel to El Areeb, who went on to capture the James F. Lewis III Stakes in his subsequent start. Alive edged Crafty Sam late for second.

“There were some decent horses in the race, but he dug in hard. When he felt the other horses coming, he kept on running,” winning jockey Julian Pimentel said. “I got an easy lead and I was really comfortable the whole way around there. I had plenty of horse left.”

Blackjack Buster is by multiple graded stakes winner Archarcharch out of the Not For Love mare He Loves Me.

The Rainbow 6 begins anew Saturday covering Races 4-9 including the featured eighth, a $42,000 entry-level allowance for fillies and mares 3 and older at six furlongs.