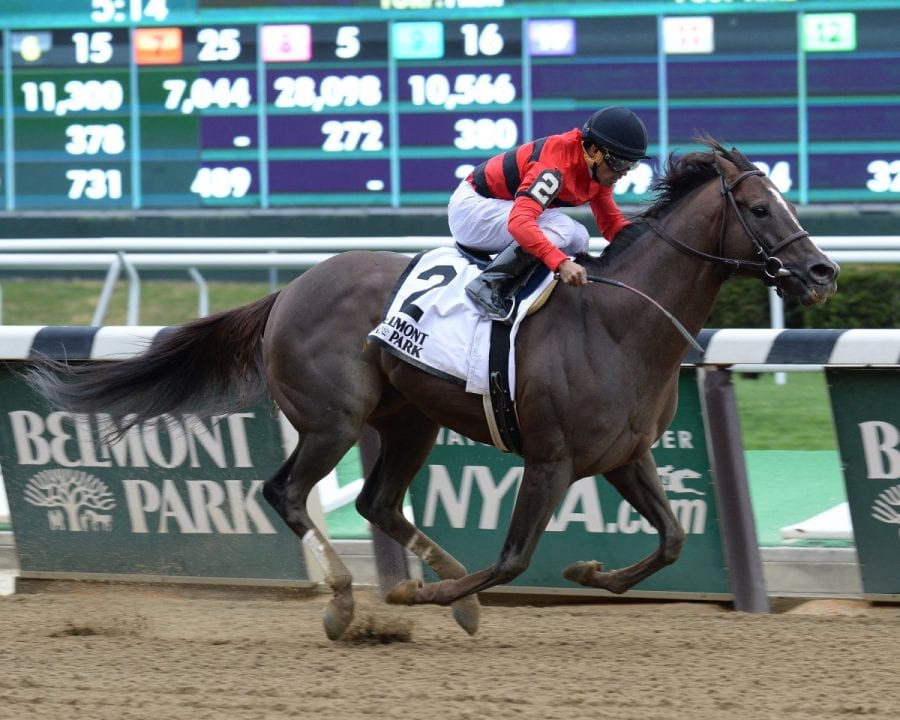 Weekend Hideaway is the morning line favorite for the Fabulous Strike. Photo by NYRA.

A full field of 11 accomplished runners will take to the gate this upcoming Wednesday night as Hollywood Casino at Penn National Race Course hosts the fifth running of the $200,000 Fabulous Strike Handicap. In addition to the six furlong Fabulous Strike, a pair of six-figure stakes – the $100,000 Swatara Stakes and the $100,000 Blue Mountain Juvenile Fillies – will also be on the November 23, Thanksgiving Eve menu at Penn National.

Weekend Hideaway (3-1), a New York-bred son of Speightstown, owned by Red and Black Stable, is the 121 pound highweight for the Fabulous Strike. Trained by Philip Serpe, Weekend Hideaway proved he could sprint with some of the country’s best speedsters when running third in the Vosburgh (G1) at the recently concluded Belmont fall meet. He followed that with a runner-up finish in the $150,000 Hudson Handicap when once again facing restricted company. Both stakes were run on an off track, which has proved to be no problem for Weekend Hideaway who has won four of his seven starts in muddy or sloppy conditions. Overall, Weekend Hideaway has earned $872,532 in his 35 career starts.

“This horse has had a remarkable year for us,” said Serpe. “He continues to be very consistent and Luis has done a great job with him. We are excited to send him up for this race.”

Jockey Luis Saez, who has ridden the six-year-old in his last six starts, will break from post position eight on the morning-line favorite.

Drawing the far outside post is Barbara Hopkins’ Trouble Kid (5-1), a four-year-old gelded son of Harlan’s Holiday trained by Ramon Preciado, who enters the Fabulous Strike as the lone graded stakes winner in the field having taken last year’s Gallant Bob (G3) at Parx. Second in last year’s Frank J. De Francis Memorial Dash at Laurel Park, Trouble Kid prepped for this with an 11-length allowance score two weeks ago at Parx.

Angel Arroyo will ride the Kentucky-bred earner of $515,478.

New Jersey-bred Chublicious (6-1) has done little wrong in 2016 winning three of his four efforts. Owned by David Gruskos, the five-year-old son of Hey Chub ships to Penn National off of three, six-furlong stakes wins at Monmouth Park this year, including a score in the unrestricted Mr. Prospector Stakes in June. Thus far in 2016, Chublicious’ lone defeat came at the hands of A.P. Indian in the Alfred Vanderbilt (G1) at Saratoga back on July 30. Now trained by Claudio A. Gonzalez, Chublicious has bankrolled $299,514 in his 16 lifetime starts.

Victor Carrasco has the mount on Chublicious who breaks from post position two.

David Jacobson owns and trains Chief Lion (6-1), a six-year-old Florida-bred, who is just one of three entrants in the Fabulous Strike field with experience at Penn National, having decimated an allowance field by more than 9 lengths back on May 5. Recently, Chief Lion has been testing the waters in some deep company, checking in third behind Breeders’ Cup Sprint starters Delta Bluesman and Limousine Liberal in the Smile Sprint (G2), second behind stablemate Stallwalkin’ Dude in the Tale of the Cat and then ninth in the Forego (G1). All told, this will be his 33rd career start with eight wins and earnings of $417,461.

Emannuel Esquivel who rode him to the allowance victory at Penn National in May and in his most recent victory – an allowance score at Parx on October 8 – has the mount on Chief Lion in the Fabulous Strike.

The well-traveled Candip (8-1), owned by K Town Partners, has been successful sprinting at Churchill Downs, Prairie Meadows, Gulfstream Park and most recently, Remington Park in Oklahoma City. Trained by Michael Tomlinson, the 5-year-old son of Candy Ride is closing in on the $300,000 earnings mark with seven career wins.

Kendrick Carmouche has the mount on Candip.

Colts Neck Stables’ Awesome Speed (6-1) hopes cutting back to sprint distances is a recipe that will get him across the finish line for the first time in four outings. After winning the one mile Mucho Macho Man at Gulfstream Park in January, the son of Awesome Again found himself on the Triple Crown trail contesting the Fountain of Youth (G2) and, eventually, the Preakness (G1). Sandwiched between those two starts was a win in the Frederico Tesio at Pimlico – a race that saw him moved up to the top spot after first place finisher Governor Malibu was disqualified.

Most recently, Awesome Speed contested the Gallant Bob (G3) on the Pennsylvania Derby and Cotillion undercard and checked in fourth, his first defeat in three tries at the Fabulous Strike’s six furlong distance.

Post time for the first race on the Wednesday, November 23 card is 6:05 p.m. EST, with the Fabulous Strike Handicap scheduled as Race 4 with a post time of 7:26 p.m.