Charitable Annuity looks to take show on the road in Swatara 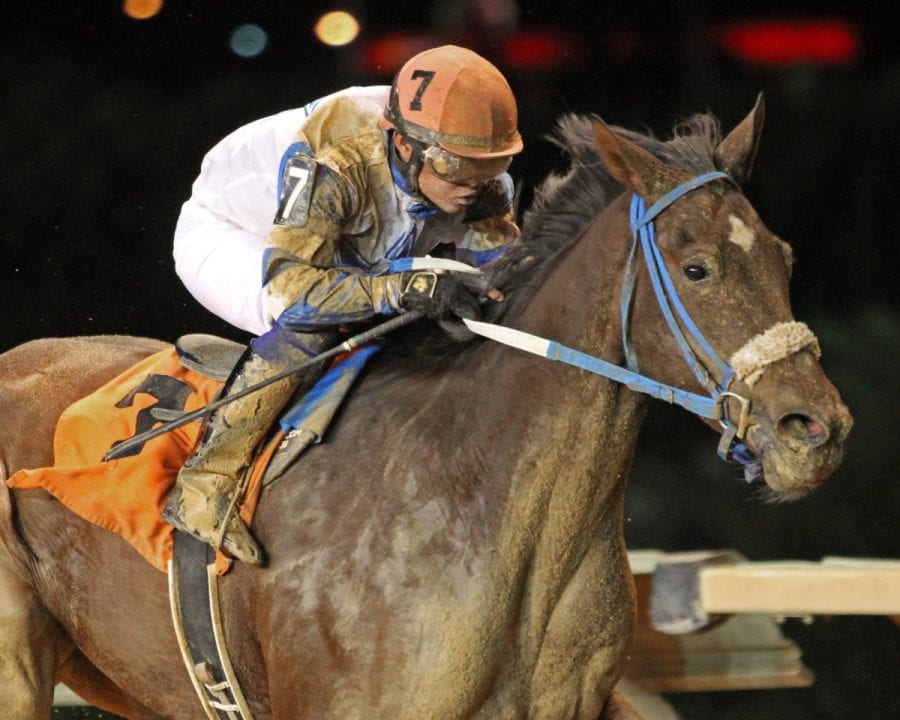 Charitable Annuity is favored in the Swatara. Photo by Coady Photography.

While the $200,000 Fabulous Strike has top billing on Penn National’s Thanksgiving Eve card, a pair of $100,000 stakes in the Swatara and Blue Mountain Juvenile Fillies have drawn full fields of their own. The seventh running of the Swatara attracted a field of ten very capable runners at the distance of one mile and one-sixteenth on the main track.

Charitable Annuity drew the rail and was installed as the 5-2 morning line favorite.

Owned by Mark Russell of Winchester, Virginia, the four-year-old son of Charitable Man, is in fine form this year having won five of his ten outings in 2016. Included in those defeats was a game runner-up finish in the $500,000 West Virginia Breeders Classic at Charles Town on October 8 as he fell short in a bid to defend his title.

“This is a very versatile horse,” said Russell. “In his last stakes, he got in a tight spot and had to steady, but he impressed us the way he re-rallied and overcame adversity. We could not ask for him to be doing any better right now.” In his 20 career starts up to this point, Charitable Annuity has posted 12 wins and bankrolled $601,840.

Russell, who has owned thoroughbreds since 1985 including recent retiree Russell Road, had a favorable experience at Penn National on June 4, when his new stable star ran third in the $200,000 Mountainview Handicap. “We were up here for the Mountainview and had this race, as part of the series, in the back of our minds,” said Russell. “The timing worked out well for him.”

There are several proven routers in the Swatara Stakes, most notably Fabulous Kid, a five-year-old son of Congrats, owned and trained by David Jacobson. Top New York rider Irad Ortiz, Jr. will pilot the Florida-bred, who just missed in his recent open allowance one-mile test at Aqueduct. Fabulous Kid has earned $347,017 in his 28 lifetime starts, and will break from post position three as the 3-1 second choice.

Res Judicata (4-1), owned by Someday Farm and trained by John Servis, will likely attract some attention at the betting windows on the back of his front running score earlier this summer in the Salvator Mile (G3) at Monmouth Park and his local record. The six-year-old by Smarty Jones is nearing the half-million mark in lifetime earnings and has won both of his starts on the Penn National oval. Jorge Vargas will ride Res Judicata from the far outside post.

The lone 3-year-old in the ten-horse field is Badabing Badaboom (8-1), bred in Indiana by Penny and Michael Lauer. The dark bay gelding has won four of his 10 lifetime starts with a stakes win on a sloppy track at Indiana Grand in June. Michael Lauer trains the son of Spring at Last, who has won two of his three efforts at the Swatara’s mile and one-sixteenth distance.

The field also includes Winter Ride (15-1), Amplified (8-1), Grasshoppin (20-1), and a trio of shippers from Laurel Park in Double Whammy, He’s Achance, and Warrioroftheroses, all 12-1 on the morning line.

Post time for the first race on Penn National’s Thanksgiving Eve card is set for 6:05pm EST, with the Swatara scheduled as Race 3 with a post time of 6:59pm.