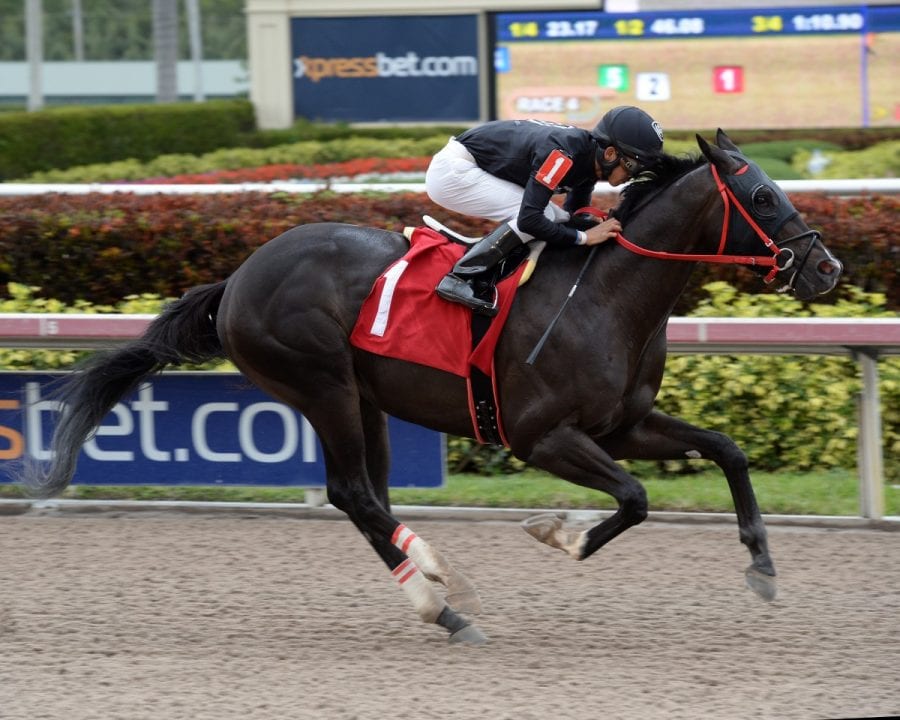 Three months after his promising career was interrupted by a freak foot injury, Gelfenstein Farm’s Grade 3-winning speedster Sharp Azteca is slated to make his return to the races in Saturday’s $100,000 City of Laurel presented by Fidelity First at Laurel Park.

The seventh running of the City of Laurel for 3-year-olds the and 26th renewal of the $100,000 Safely Kept presented by Insight for 3-year-old fillies, both at seven furlongs, are among seven stakes worth $825,000 on an 11-race Fall Festival of Racing program highlighted by the $250,000 Frank J. De Francis Memorial Dash (G3) presented by Maker’s Mark.

Also on the card are the $100,000 James F. Lewis III presented by Ourisman of Bowie, the $100,000 Smart Halo presented by B&B Commercial Interiors for 2-year-olds, and the $75,000 Geisha presented by Detail Finishes for Maryland-bred/sired females 3 and up at one mile.

Post time for the Fall Festival of Racing, which also includes four races over Laurel’s world-class turf course, is noon EST. A total of 142 horses were entered on the day, an average of 12.9 per race.

Sharp Azteca strung together three straight wins over the winter and spring, all at a mile, each by open lengths, capped by his 13-1 upset of the Pat Day Mile (G3) on the Kentucky Derby (G1) undercard.

He finished fourth as the favorite in the seven-furlong Woody Stephens (G2) when he was unable to establish his front-running style after being bumped at the break. In his most recent race, the Super Derby Prelude Aug. 6, he set a modest pace under regular rider Edgard Zayas before falling a half-length short of holding off Texas Chrome.

“This is a horse who likes to go fast. I think he went in 25 and almost 49 [seconds] and I told Edgard, ‘What are you doing?’ compared to how fast he went in his last two races,” trainer Jorge Navarro said. “He jumped off and said, ‘We’re going to win the Super Derby.’

“Coming off the track he ripped his quarter. I thought it was going to be a six or seven-month injury. I was devastated,” he added. “I was sick, because I believe that he’s probably the best horse I have in my barn. He’s amazing.”

Once healed, Sharp Azteca resumed training and shows six works since mid-September, including the last three at his home base of Gulfstream Park West in South Florida. He went five furlongs in 1:00 Nov. 12 in his final tune-up for the City of Laurel.

“It is a good track to train a racehorse. It’s my favorite track. Anytime I take a stake horse anywhere else, they run great,” Navarro said. “He came back good, healed up good and he’s been working good. He’s ready.”

South Florida-based Zayas, a finalist for the 2013 Eclipse Award as top apprentice, will be aboard from Post 9 of 14 at 120 pounds.

“The Pat Day Mile, that was a nice race. He beat some nice horses in there,” Navarro said. “I believe things happen for a reason. I believe he grabbed his quarter for a reason, to give him some time. I was devastated but, hey, we have a future with him. He’s just growing and growing and he looks amazing.”

Sharing topweight of 122 pounds in the City of Laurel are multiple-stakes winner Awesome Speed, undefeated in three career starts in Maryland, and 2015 Iroquois (G3) winner Cocked and Loaded. Second in a pair of Parx optional claiming allowance sprints against older horses, Cocked and Loaded has won one of 10 starts since his stakes victory, that coming in a six-furlong claiming event Aug. 4 at Saratoga, where he was claimed by trainer Michael Pino.

Colts Neck Stable homebred Awesome Speed broke his maiden and won the James Lewis last fall at Laurel, won the Mucho Macho Man at Gulfstream Park and returned to Maryland for the Federico Tesio in April. He finished second by a nose but was placed first following the disqualification of Governor Malibu for interference.

The 1 1/8-mile Tesio earned Awesome Speed an automatic berth to the Preakness (G1), in which he raced up close early but tired to ninth. Given some time, he returned to run fourth by three lengths in the six-furlong Gallant Bob (G3) Sept. 24 at Parx last time out.

“I’m not so sure he really wanted to go that far. Because of all that money there we did try to stretch him out, and he did win the mile and an eighth down there but it was slow. I think he’s more of a sprinter,” trainer Alan Goldberg said. “I think [last time] he just needed a little run, not that he wasn’t fit, but all of a sudden you’re going two turns and you have to go in 45 [seconds]. It took a little out of him, but he came out of the race great and he’s doing great, too.”

Also making his comeback in the City of Laurel is M M G Stables’ two-time stakes winner Never Gone South, unraced since finishing fifth and being placed fourth in the six-furlong Chick Lang on the Preakness undercard May 21.

Trainer Cal Lynch opted to give Never Gone South some time off to point for a fall campaign after the bay Munnings colt opened the year by winning the Frank Whiteley Jan. 16 at Laurel after closing 2015 with back-to-back runner-up finishes in the James Lewis and Marylander.

“The race is definitely coming up a little saltier than we expected. I think it’s going to be one of the most competitive races on Saturday. There’s five or six horses in there that can win,” Lynch said. “I’m hoping we don’t need the race. It’s a little tough coming off the layoff sometimes, but he’s doing really, really well and we’re excited about him. If it’s not this one, then the next one.”