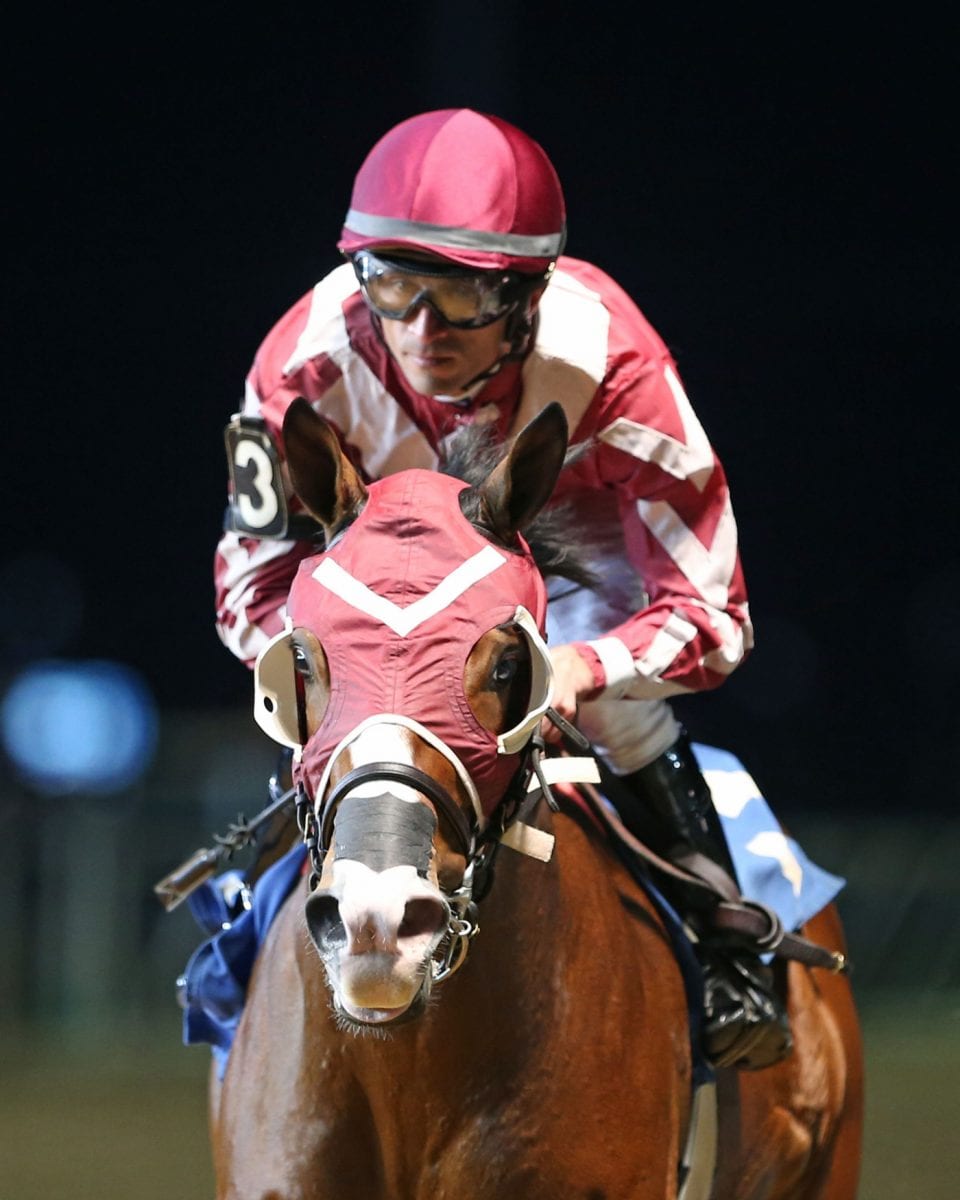 Rise Up. Photo by Coady Photography.

Millionaire Rise Up, owned by Paul and Andrena Van Doren set a stakes record while winning the 2013 Delta Jackpot (G3) and has continued his winning ways into his five-year-old campaign. The son of Rockport Harbor scored a gate-to-wire victory in his most recent start – the $100,000 Wild & Wonderful Stakes at Charles Town on September 17. Trained by Tom Amoss, Rise Up has won ten career races with earnings of $1,136,125.

Serpe has nominated Weekend Hideaway, a very accomplished New York-bred son of Speightstown, owned by Red and Black Stable. Weekend Hideaway proved he could sprint with some of the country’s best speedsters when running third in the Vosburgh (G1) at the recently concluded Belmont fall meet and has earned $872,532 in his 35 career starts.

Stallwalkin’ Dude is one of several runners in consideration by trainer David Jacobson. The Florida-bred eclipsed the million dollar earnings mark on October 29 at Belmont Park with a victory in the Bold Ruler (G3). Jacobson co-owns the 6-year-old sprinter with Head of Plains Partners, LLC. Another Jacobson nominee is Chief Lion, also a six-year-old, who was impressive on the Penn National oval, drawing off to a nine-length victory in on May 5.

Trainer Wesley Ward has nominated The Great War, a four-year-old War Front colt bred by Claiborne Farm. He ran third in the 2015 Neartic (G2) at Woodbine, before stepping up to the 2015 Breeders’ Cup Turf Sprint at Keeneland. His record stands at five wins from 18 starts with $351,057 in lifetime earnings.

Favorite Tale captured last year’s edition of the six-furlong sprint for trainer Guadalupe Preciado, while Ramon Preciado has nominated Trouble Kid to this year’s renewal. The four-year-old gelded son of Harlan’s Holiday wintered at Gulfstream Park, and prepped for this with an 11-length allowance score two weeks ago at Parx.

Majestic Hussar, owned by William B. Bayne, Jr., lit up the toteboard as the runner-up in last year’s Fabulous Strike at odds of 85-1. Trained by William A. Campbell, the six-year-old Kentucky-bred has run well in two stakes at Laurel Park this meet and posted a bullet work on November 5.

Jacks or Better Farm Inc.’s homebred Grande Shores is under consideration for the Fabulous Strike for trainer Mark Casse. The eight-year-old son of Black Mambo has won over $640,000 in his 61 career starts. He was a runner-up to the aforementioned Rise Up in the $100,000 Wild & Wonderful Stakes at Charles Town two months ago.

In addition to the Fabulous Strike, two additional stakes will be contested on the November 23rd card.

The $100,000 Swatara Stakes will be run at the distance of one and one-sixteenth miles. Eclipse Award winning conditioner Todd Pletcher has three proven runners nominated for the race in Charles Town Classic (G2) victor Stanford, the multiple graded stakes winning Red Rifle and Tommy Macho who won the Fred Hooper (G3) at Gulfstream Park earlier this year.

The purse for the Blue Mountain Juvenile Fillies has been increased to $100,000 this year and attracted a quality group of Pennsylvania-breds. La Vitesse from the barn of Scott Lake, has won her last two efforts by a combined 19 lengths and looks ready to advance into stakes company. Stakes winner Item dazzled in the Maryland Million Day card at Laurel Park for trainer Thomas Coulter.

“We are expecting excellent fields for each of the features on next Wednesday’s racing program,” said Eric Johnston, Director of Racing Operations. “The interest from horsemen has exceeded our expectations. We look forward to giving racing fans an early Thanksgiving treat at Penn National.”

The draw for the November 23 card will take place on Friday, November 18. The Fabulous Strike Handicap and Swatara Stakes are part of the Penn Gaming Racing Challenge Event, a year-long incentive competition that offers bonuses such as waived entry fee nominations and travel costs to leading owners, trainers and riders in select PGNI events.