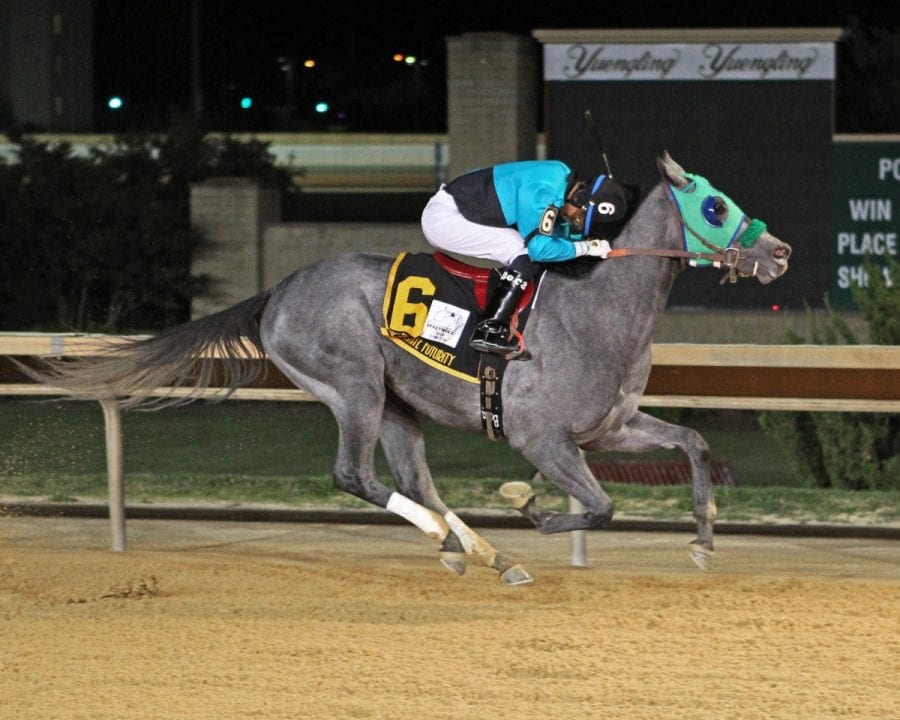 
John Barleycorn was a well-beaten fourth in his career bow last month, finishing almost seven lengths behind Runnin’toluvya in a 4 1/2 furlong maiden race.

Turns out all the two-year-old Spring At Last colt needed was more ground.  Last night, John Barleycorn broke his maiden, netted a nice payday, and earned blacktype all in one fell swoop by winning the $50,000 Tri-State Futurity at Charles Town Races.

Runnin’toluvya followed up his maiden victory with a score in the Vincent Moscarelli Memorial Breeders Classic on West Virginia Breeders Classics night.  But the Tim Grams trainee did not post for the Tri-State.

In fact, none of the top three from the Moscarelli Memorial Breeders Classic — the state’s premier two-year-old state-bred race — returned for the Tri-State.  Their absence left maiden winner Candy Man One — a full brother to local speedster Greenway Court — the 1.30-1 post time favorite, with John Barleycorn the second choice at 1.90-1.

Under Arnaldo Bocachica, John Barleycorn stalked the pace on the outside, made the lead with three-eighths of a mile to go, extended his advantage leaving the quarter pole, and had plenty in reserve to hold off the late run of I Need You en route to a 1 3/4 length win.  Laso the Man was third.  Running time for the seven furlongs was 1:27.97 over a fast main track.

John Barleycorn is trained by Jeff Runco for owner David Raim — the duo that scored twice on Breeders Classics night with the undefeated Bullets Fever in the WV Lottery and Spa Creek in the Distaff.  Bred in West Virginia by Hector Alcalde, he is out of the Numerous mare Grey Traffic and is a half-brother to multiple stakes winner Ullapool.