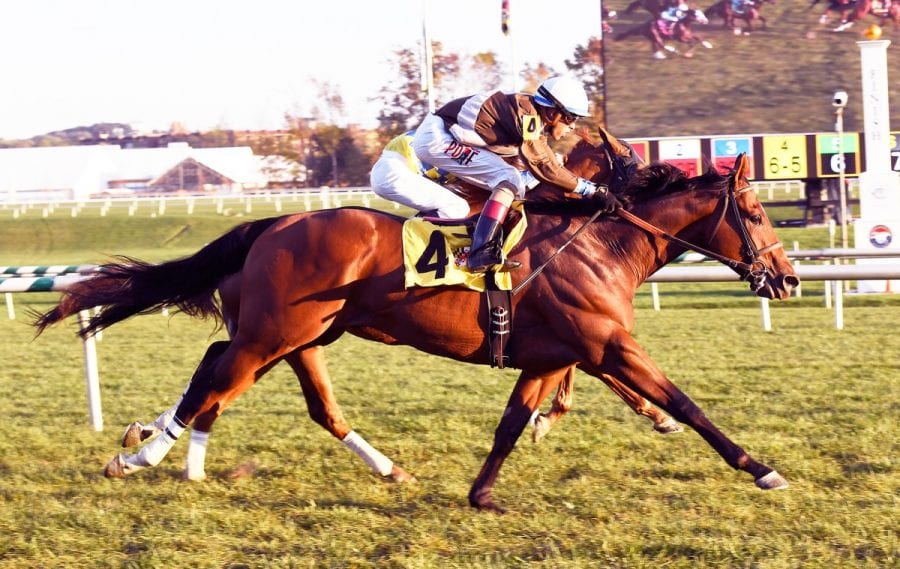 Hillwood Stable’s Top of Mind, a tough-luck second in the Commonwealth Turf Cup (G2) last time out, rated on the inside before moving out wide and powering down the stretch to win Saturday’s featured 10th race at Laurel Park.

It was the third win in four starts for the gelded 4-year-old son of Hall of Famer Curlin, all since being switched to the turf by trainer Rodney Jenkins. Sent off as the 6-5 favorite in a field of eight older horses, Top of Mind ($4.40) ran 1 1/16 miles in 1:40.81 on a firm Fort Marcy Turf Course.

“It was just a mistake I made keeping him on dirt but he’d win or get second or third on it. He’s not the same horse on the dirt that he is on the turf. He’s super on the turf, I think,” Jenkins said. “[Today] went slow the first part and that doesn’t help a horse that closes like him; they’re not wearing anybody out. I was pleased.”

With regular rider Victor Carrasco back aboard, Top of Mind was unhurried settled along the rail as Find Stakes runner-up English Minister led through an easy quarter-mile in 25.16 seconds and a half in 49.10. English Minister was still in front rounding the far turn when Carrasco steered Top of Mind to the outside to launch their bid.

Top of Mind gained steadily down the stretch to take the lead in the final eighth of a mile and outrun a stubborn English Minister to win by a neck. Iconic Artist prompted the pace all the way around and held on for third.

“I saved some ground all the way around, but as soon as I passed the three-eighths pole and I put him on the outside he was waiting for me to ask him. As soon as I asked him, he was rolling,” Carrasco said. “When we got close to the eighth pole and took the lead, he just pricked his ears and was waiting for me to hit him. I said, ‘There’s no reason for me to hit you, just keep going.’ He’s just a nice horse.”