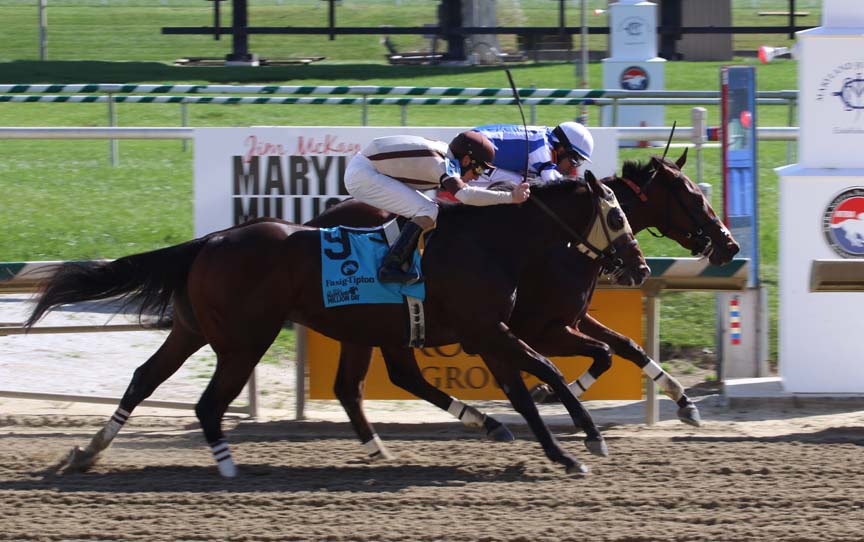 Greatbullsoffire, inside, scored in the Nursery. Photo by Laurie Asseo.


On a Maryland Million day that featured repeat scores by Phlash Phelps in the Turf and Admirals War Chest in the Classic, it was a pair of juveniles early on the card who may eventually prove to be budding stars among the local ranks as Greatbullsoffire narrowly prevailed in the Nursery and Item triumphed in the Lassie.

Heading into the Maryland Million Nursery for two-year-olds at six furlongs on the main track, Greatbullsoffire (Victor Carrasco) was viewed as one of the more logical short-priced favorites of the day. Eventually sent postward as the even-money choice, the Hamilton Smith-trained son of Bullsbay had won his first two starts, including a minor stake at Delaware Park, before running third in the $75,000 Laurel Futurity on the grass. But on his way to a second stakes score and third win overall, Greatbullsofffire had to display more than a hint of resiliency.

Away well to sit just off the leaders down the backside, Greatbullsoffire took dead aim on In Arrears midway on the far turn. But the favorite was soon hounded by 69-1 longshot Dancing With Maude (Steve Hamilton), who had been eighth and last in his lone previous outing for trainer Tim Keefe. Inside the eighth pole, Dancing With Maude surged to a length lead and the day’s biggest upset looked close at hand. But Greatbullsoffire fought back along the inside under serious urging from Carrasco to forge a head victory while getting the distance in 1:11.48.

“I just wanted to sit just off [In Arrears] on the far turn,” Carrasco said. “When I started to move on the turn I knew that I had that one. But then [Dancing With Maude] moved up alongside me and at the eighth pole I thought he was going by me. I couldn’t believe I was going to get beat by a maiden. I stayed after my colt in the lane and he dug in and fought back. He showed a lot of heart. I was definitely worried when [Dancing With Maude] went by me at the sixteenth pole. I couldn’t believe that I was going to get beat.”

Greatbullsoffire has won three of four starts and earned over $120,000 for Smith and owner Kathleen Willer, and the Bullsbay colt perhaps showed perhaps more resolve than he’d previously been asked for.  Smith was quick to give credit to horse – and rider.

“It was a gutty performance for him,” Smith said. “He looked like a beaten horse in the lane. The kid (Carrasco) didn’t give up. Once he asked him to go on, he dug back in and came on. We were lucky to get up. He ran two good races on grass and he hasn’t been beaten on dirt. I think I’ll stick with the dirt from here on, for the rest of the year anyway. I hope we can get him to go further.”

In the $100,000 Maryland Million Lassie for two-year-old fillies at six furlongs on the main track, firsts for a jockey and owner led to the victory.

Jockey Tyler Conner, who rode Ignotus to a 10th-place finish in the Nursery, hopped aboard Item to log the Lassie victory for his first career stakes score.  That win was also the first in a $100,000 race for owner Tom Coulter, whose Arrowwood Farm bred the Orientate filly.

Item kept her perfect record intact when she gained command early and then outfought She’s Achance Too (Jevian Toledo) to score by a head in 1:12.45 for Coulter and trainer Rodrigo Madrigal. Item had won first out against state-bred maiden special weight foes at Penn National, but Saturday afternoon her first stakes triumph was also the first for her rider.

“She really kicked it in when she was pressured from both sides,” said Conner, who has won 120 of 738 races this year with earnings of $2.2 million and now owns 328 victories and nearly $6.4 million earned from nearly 2,400 mounts. “Her first start at Penn was similar, but we were on the outside. She really dug in today and it’s nice to have a horse that runs like that. I am very excited to get my first stakes win here today. I rode a little bit here last year, but this is really great.”

“I have several nice two-year-olds for Mr. Coulter,” Madrigal said. “This horse won at Penn National and I expected her to do well here. We have a stakes races coming up at Parx that we will run her in next. The main thing with young horses is that you have to keep them sound, fit and healthy, then run them when they have a good chance to win.”

Coulter was visibly excited after the race, and for good reason.  Not only did he breed Item, but he also bred Item’s dam, Black Coco.  Item’s win is the high point – to date – of a breeding effort that began in 2006, when Coulter bred Cape Town to Perfectly Polish, that mating resulting in Black Coco in 2007.  Item is the first foal out of Black Coco, who won twice in her modest racing career.

“At the farm, she was kind of in the middle of the pack,” Coulter said of Item.  “When she got to Penn National, Rod [Madrigal] said, ‘That’s the one.’  She’s a really nice filly, and you saw how game she was today.  It is super.”