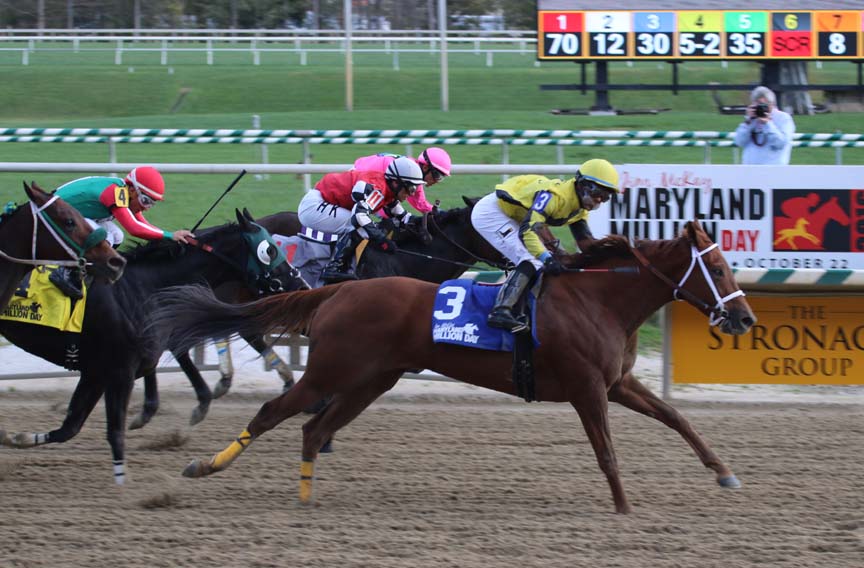 Michael Cox’s Rockin Jojo unleashed a furious outside stretch drive to pull off a 30-1 upset in Saturday’s $100,000 Maryland Million Distaff.

The 4-year-old daughter of Street Magician scored by a half-length to record her second career stakes victory while running seven furlongs in 1:25.06 under jockey Angel Cruz.

The Guadalupe Preciado-trained filly was rated well off the early pace as Loveable Lady, the 4-5 favorite ridden by Horacio Karamanos, closely attended the early pace set by My Magician. Lovable Lady took a narrow lead on the far turn under a motionless Karamanos but was quickly joined by a driving Scip’s Sonata to his outside on the turn entering the stretch. After momentarily losing the lead, Lovable Lady moved to the lead again, only to falter late in the stretch run as Rocking Jojo roared to victory on the far outside.

“We had a bit of trouble early in the race and I had to wait to get out. I knew that I had a lot of horse because every time I asked her to move she responded well,” Cruz said. “I just waited and waited, and when I got out she gave me the run that I thought she would. We didn’t win by much, but just enough.”

Cee Bee Gee Bee rallied under Jevian Toledo to finish second, a nose ahead of the tiring Lovable Lady in third.

Rockin Jojo, who had finished third in the 2014 Maryland Million Lassie before winning the Blue Mountain Juvenile Fillies Stakes at Penn National, earned $55,000 for her fourth career victory in 17 starts.