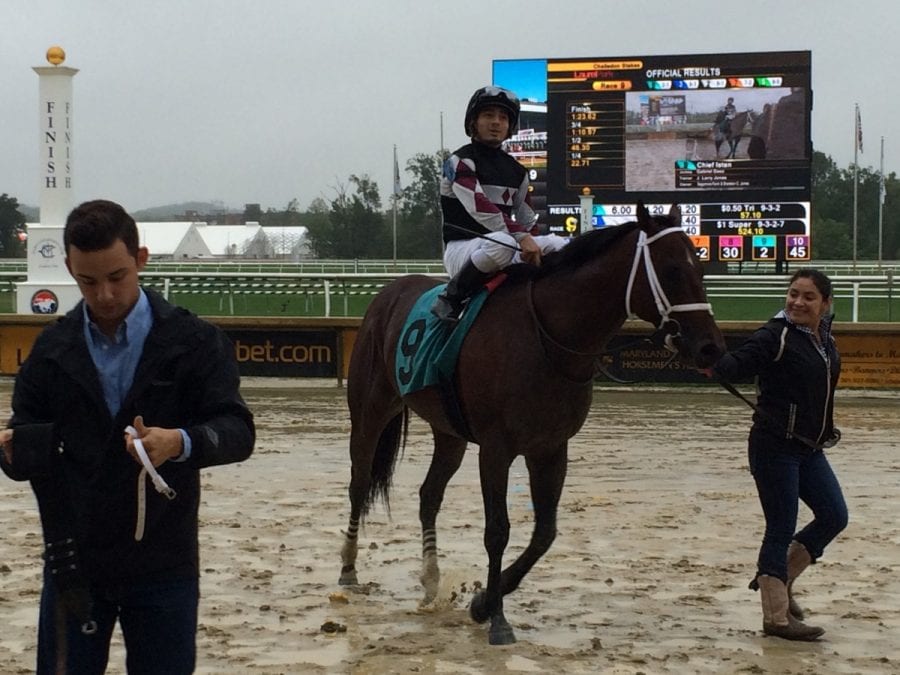 It may be later than expected, but Chief Istan is rounding into the racehorse his connections expected all along.

Under a confident Gabriel Saez ride, the four-year-old Istan colt overhauled speedy Big Guy Ian early in the stretch and held off the late charge of Rockinn on Bye to post a three-quarters length victory in today’s $75,000 Challedon Stakes at Laurel Park.

“The distance wasn’t a problem,” said Andre Stock, assistant to trainer Larry Jones.  “It was just a good tough field.”

Indeed, despite the modest conditions — the race was restricted to horses that had never won a sweepstakes — the Challedon enticed a rugged group of eight runners that included graded stakes-placed runners Rockinn on Bye, All Star Red, and Mylute, who finished third in the 2013 Preakness.

Despite that, it was Chief Istan, making just the seventh start of his career, who proved best, navigating seven furlongs over a sloppy, sealed main track in his first career try beyond six furlongs in 1:23.62.

Chief Istan broke alertly and found himself in an early four-horse scramble for the lead with Big Guy Ian, Warrioroftheroses, and This Boy’s Sharp also looking for the top spot.

“I knew not all four were going to stay on the lead,” Stock said.  “We have a good colony of riders, and I knew one of them was going to take back.”

Chief Istan, between horses, found himself in third through a quarter mile in 22.71 seconds, moving up to second after a half in 46.30.

“I told Gabriel [Saez] don’t fight him,” said Stock.  “Let him do what he wants to do. If the horse wants you up there, he’ll put himself up.”

Chief Istan moved to the lead in upper stretch and then stayed on gamely through the late going despite switching leads several times in the final furlong.  Rockinn on Bye was second, 1 1/4 lengths ahead of Big Guy Ian, who stubbornly held third.  Favored All Star Red was never really involved and finished fifth.

Chief Istan, owned by Sagamore Farm and Brereton Jones, started his career running, winning at first asking at Delaware Park in late 2014.  In his second start, at Keeneland, he again won easily while earning a Beyer speed figure of 101.  Away a year, he returned in May and now has won three times in five starts this year and five of seven overall.  His career earnings now top $157,000.

As for the future, Chief Istan has options.