My Impression sweeps to Oaks victory 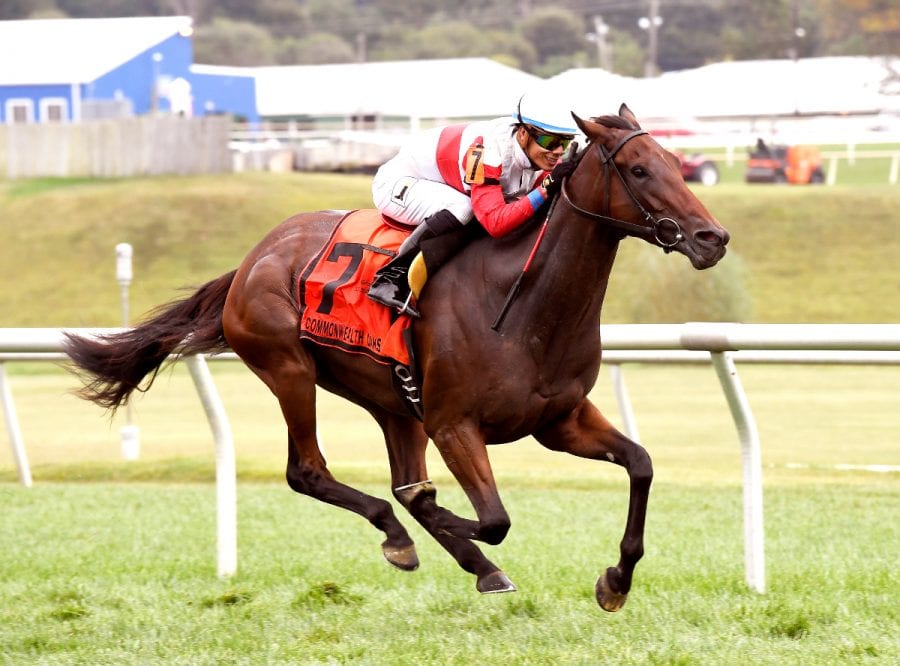 Stuart Janney III’s My Impression found her footing over a firm turf course at Laurel Park Saturday, surging to a 3 1/4-length victory in the $150,000 Commonwealth Oaks (G3).

The Shug McGaughey-trained daughter of Sky Mesa, who finished troubled sixth in the Lake Placid (G2) at Saratoga Aug. 21, rebounded Saturday to added graded-stakes credentials to her resume in the 1 1/8-mile turf race for 3-year-old fillies presented by the Virginia Equine Alliance at Laurel Park.

Ridden by Jose Ortiz, My Impression rated off the pace by It’s the Truth while racing three wide around the first turn, along the backstretch and around the far turn. Leaving the turn into the homestretch, the Kentucky-bred filly was angled to the inside, where she offered an impressive kick to draw off to a commanding victory.

“I thought she was very impressive. Obviously, he [Ortiz] rode her beautifully, as he always does. He found that hole and she just had tremendous kick coming home. I couldn’t have been more pleased with what I saw,” said Janney, whose homebred filly was sent to post as the 9-2 fourth betting choice.

My Impression, who was saddled by assistant Robert Triolo, gave Ortiz a much smoother trip in the Oaks than he had experienced recently.

“This filly I have been having trouble figuring her out but today, when I broke on her she relaxed good for me. The last couple times I rode her she was jumping on the bit and fighting me and I think that’s why she didn’t finish so good. Today was a different ballgame. She broke out of there running and I was able to tuck her in, and as soon as I put her behind horses she relaxed more.”

Chad Brown-trained Noble Beauty, the 7-2 second choice ridden by Feargal Lynch, made a late run along the rail to finish second, a head in front of stablemate Pricedtoperfection, the third betting choice who was ridden by Manuel Franco. Stella Rose, the 8-5 favorite ridden by Trevor McCarthy, finished another length back in fourth.

My Impression ran 1 1/8 miles over a firm ‘Dahlia’ turf course in 1:46.57 to win her fourth race in seven lifetime starts that included a win in the Christina Stakes at Delaware Park that preceded her sixth-place finish in the Lake Placid.

“I think she is a very good filly. We went up to the Lake Placid with the idea of having a say in what was going to happen. Those were the best fillies, but we thought we were in there with some chance.,” Janney said. “The grass was a little slippery. She does have flat feet and has a little problem with her frogs. They way they shoe her is a little different, and she just couldn’t stand up that day. Fortunately, she came out of it just fine and she’s been training well. I don’t know what we’ll do next. This is obviously a step forward. She’s a graded-stakes winner.”