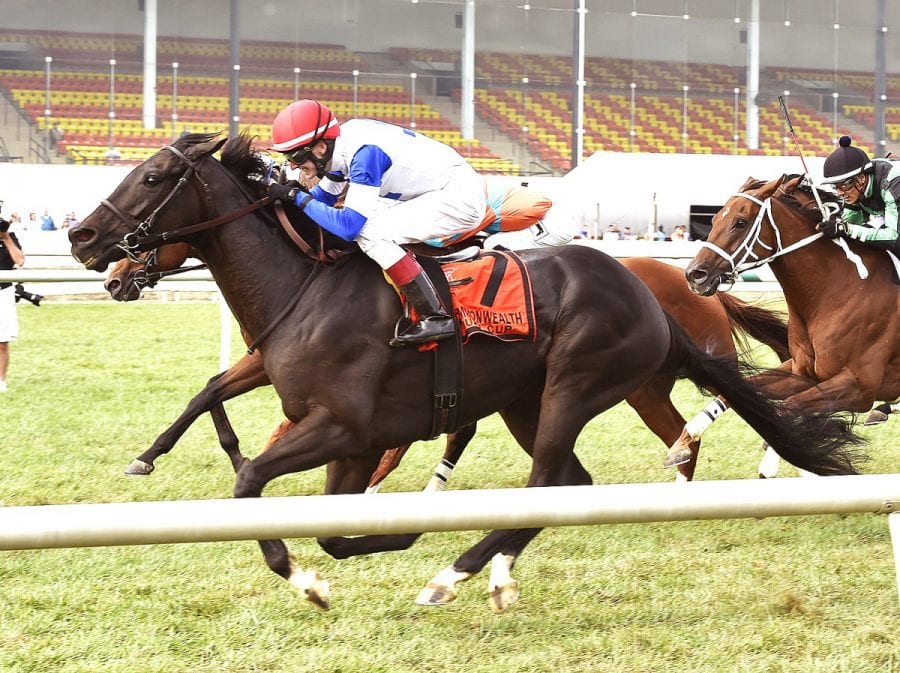 Jump Sucker Stable’s Blacktype ran his win streak to three races with a record-setting performance, settling early and finding room along the inside down the stretch to capture the $200,000 Commonwealth Turf Cup (G2) Saturday at Laurel Park.

The one-mile Turf Cup for 3-year-olds and up was the fourth of eight stakes worth $850,000 in purse money and second of three graded stakes on the 11-race Commonwealth Day program.

Sent off as the third choice in a field of 11 at 7-2, the 5-year-old Blacktype won by a half-length over 25-1 long shot Top of Mind with Grade 1 winner Force the Pass, the 3-2 favorite, another neck behind in third.

“I thought that there were three or four horses in the race with some speed so I wanted him to be able to settle behind it. He was maybe a touch further back than what I was expecting but he was very comfortable,” Clement said by phone from Belmont Park. “He got a great ride from Trevor McCarthy. He was able to save ground and finished very well on the inside. We knew he was a nice horse. Today’s race confirmed that he is a nice horse without a doubt.”

Blacktype settled near the back of the field under McCarthy, saving ground ahead of two horses as 80-1 long shot Heiko – who set Laurel’s 1 1/16-mile Bowl Game Turf Course record July 24 – ran a quarter-mile in 23.26 seconds and a half in 46.43, with Macagone and Mister Brightside in close pursuit.

Heiko was still in front after six furlongs in 1:09.70 until Force the Pass swept to the lead on the far outside turning for home as McCarthy began to weave his way between horses followed by Top of Mind. Blacktype continued to gain ground steadily along the rail, surging past Force the Pass approaching the wire and holding off Top of Mind’s spirited bid.

“Early on it was a good pace and he’s got such a great stride it doesn’t feel like you’re going that fast when he was finishing. He was rolling today. It’s an honor and a great privilege to ride a horse like that,” McCarthy said. “He broke well and we got him back. The biggest thing was getting him to relax and getting him cover and just getting him to turn off in the beginning of the race.

“When I kind of made my move into the turn I thought he was really going to finish good. The hot pace really helped,” he added. “The horses kind of came back to us and he was really the last one running. He was really accelerating for me the last eighth of a mile when I really needed him the most. I’m really proud of him.”

The Turf Cup was Blacktype’s first start since winning the Oceanport (G3) July 31 at Monmouth Park, which followed by four weeks his victory in a one-mile optional claiming allowance at Belmont Park. He now has seven wins and $471,665 in purse earnings from 20 career races.

“Sometimes that happens. When horses get good, they get really good and by winning they get better. In this case, that’s what happened,” Clement said. “We took the blinkers off because he was a bit too strong with the blinkers and he seems to be a better horse that way.”