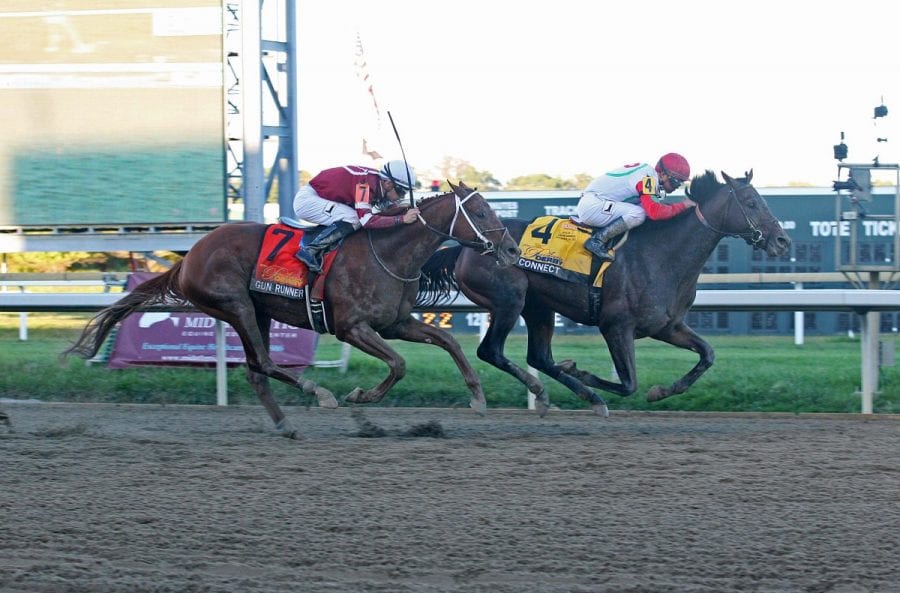 Instead, it was unheralded Connect, under Javier Castellano, who parlayed a rail rally into a half-length upset on the feature of Pennsylvania’s most important day of racing.  Gun Runner finished second, while 60-1 outsider Wild About Deb rallied into third.  Connect paid $23.20 to win.  The exacta was good for $122.40, and the 50-cent triple paid $650.35.

“He broke really well and found himself in a really good position on the rail saving all the ground,” said Cherie DeVaux, assistant to Connect’s trainer, Chad Brown.  “Javier [Castellano] was really patient with him, took his time with him and made his one run and the horse was really gutsy to hang in there.”

It was a remarkable step forward for Connect, a Curlin colt owned by Paul Pompa, Jr.  In his prior start, Connect had finished sixth in the Grade 1 Travers at Saratoga, beaten nearly 22 lengths by runaway winner Arrogate.

“This kind of horse, he’s a big horse and I think he put it together today and I’m very satisfied with the way he did it today,” Castellano said.

Meanwhile, it was another disappointment for Nyquist, who, after winning his first eight starts now has lost three straight.  This afternoon, he attained a good stalking spot in third early behind the speed of Awesome Slew, who pulled the field through a half-mile in 47.35 seconds and three quarters in 1:11.81.

Nyquist kept grinding, getting to within a half-length of the leader leaving the furlong grounds, but he emptied out late, fading to sixth, beaten by five lengths.  He did finish seven lengths ahead of Exaggerator, who never was much involved.

“Mario [Gutierrez] had him in a great spot and he just got outrun,” said Nyquist’s trainer Doug O’Neill.  “No excuses. Hats off to the team of Connect.”

The defeat may mean the end of Team Nyquist’s Breeders’ Cup Classic aspirations.

“That was definitely the worst performance of his life, so that’s not how you want to go into the Breeders’ Cup,” said his owner, Paul Reddam.  “Maybe it’ll somehow look different tomorrow, but I’m not sure how.”