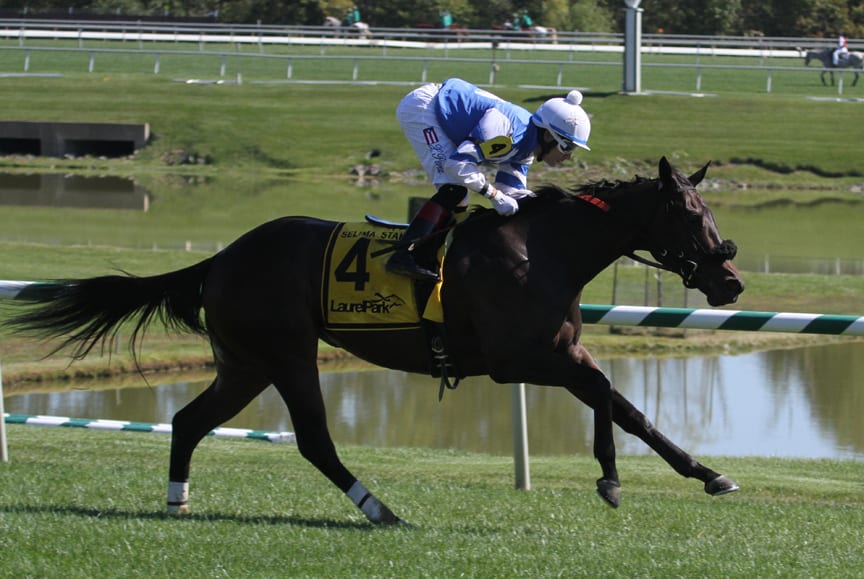 A professional winner of her debut last month, juvenile filly Fly will look for similar results when she takes on stakes company for the first time in Saturday’s $75,000 Selima on the All Along Turf Course.

Trained by Phil Schoenthal for a partnership that paid $80,000 as a yearling for the daughter of Brilliant Speed out of the Storm Cat mare Desert Stormer – all Grade 1 winners – Fly captured her unveiling by a half-length Aug. 5 over the same course and distance as the Selima.
[su_box title=”SELIMA ENTRIES” style=”glass”]

Analysis by The Racing Biz.

“She came out of the race great. We were over the moon because we paid $80,000 for her, which is the most we’ve ever spent on a yearling,” he said. “Of course when you pay that much money for the horse you’re going to have some expectations for them; at least you have the hope. To see her put it all together first time out and run professional and fast and look like a good horse doing it was extremely exciting for us.”

Fly drew the rail in a 10-horse field for her career opener but was able to secure a stalking spot under Jevian Toledo before shifting outside for the stretch drive. She has worked twice over Laurel’s turf since the win including a bullet five-furlong move Aug. 24.

Fly will break from post 8 of nine under Jevian Toledo at 119 pounds.

“She came out of the race great and has been breezing great,” Schoenthal said. “We’re excited to see her run.”

Schoenthal also entered Everest Stables, Inc.’s Brassy Lassie, a front-running maiden winner in her second career start Aug. 20 at Laurel. The Selima would be her first start beyond five furlongs and first try on turf. Forest Boyce is named to ride from post 2 at 119 pounds.

“She was very professional her second time out. She bled a little bit in that first race and didn’t run her race. We gave her some time off on the farm to let her lungs heal, brought her back and gave her an easy half-mile and put her in and she broke to the front and ran like we expected her to run the first time,” he said. “She certainly has room to improve off of that race and she’s going to have to improve to be competitive I think.”