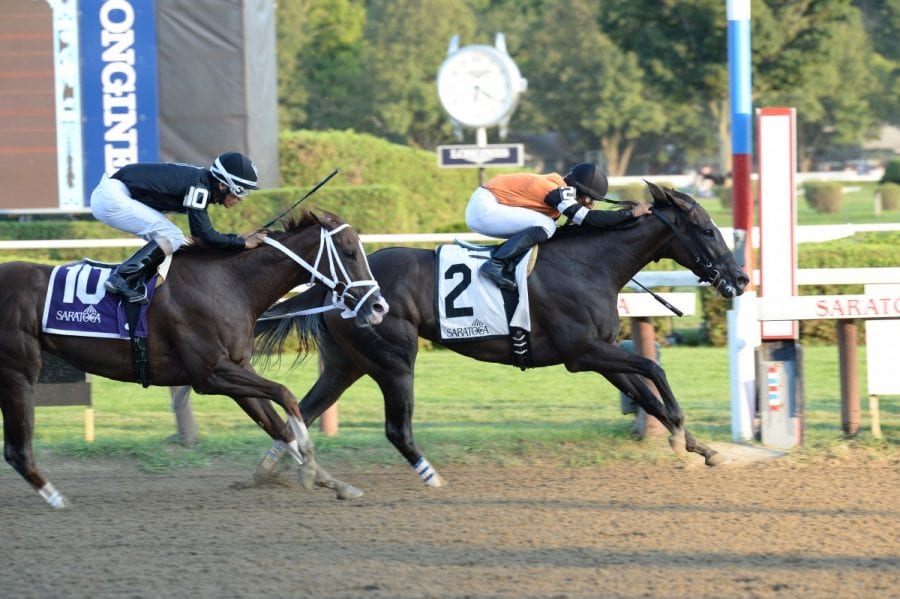 Briefly overtaken by Dearest turning for home, 22-1 shot Lucy N Ethel battled back along the inside to prevail by a half-length on Sunday in the 69th running of the Grade 2, $300,000 Prioress for 3-year-old fillies at Saratoga Race Course.

Sent straight to the front by jockey Jose Lezcano, Lucy N Ethel zipped through an opening quarter-mile in 22.05 seconds, with the half going in 44.96, before being confronted by Dearest to her outside at the quarter-pole. The dark bay daughter of During dug in along the rail once straightened for home and promptly snatched back the lead, going on to complete the six furlongs in 1:09.33 and run her record to 4-for-4.

“She’s a very nice filly,” said Lezcano, who was aboard for the first time. “The trainer [Chloe Bradley] told me to take her away from the pony and warm her up pretty good, let her break and go to the lead. Everything went as planned. She broke well and I got good position in front and she did it easy. I felt I had enough horse in the stretch. She came in prepared for this race today.”

The victory was the second graded stakes score for the Pennsylvania-bred, who won both starts as a 2-year-old at Parx Racing. She launched her sophomore campaign with a front-running score in the Grade 3 Old Hat in January at Gulfstream Park, after which she had a chip removed from her knee and was given time off.

“We knew she was training brilliantly against some very nice horses, so we really thought we had a shot at this,” said Steve Perry of J. A. G. Racing, which co-owns Lucy N Ethel with Jettany Thoroughbred. “It’s one of the last 3-year-old races that there are in the country for fillies, so it was our plan all along. We had just hoped we had a race to enter her in before this.

“She’s good enough for this, obviously,” he added. “We were hoping to run good, maybe hit the board or possibly do what we did. We were pretty confident but it’s hard, this was a lovely group of horses. These are some of the best in the world as far as sprinters go.”

Lucy N Ethel returned $47.40 for a $2 win wager, and more than doubled her career earnings to $306,420.
Takrees was 2 ¾ lengths back in third, with favored Off the Tracks checking in a neck behind in fourth. Completing the order of finish were Kareena, Coniah, One True Kiss, Lost Raven, Coppa and Appealing Maggie.