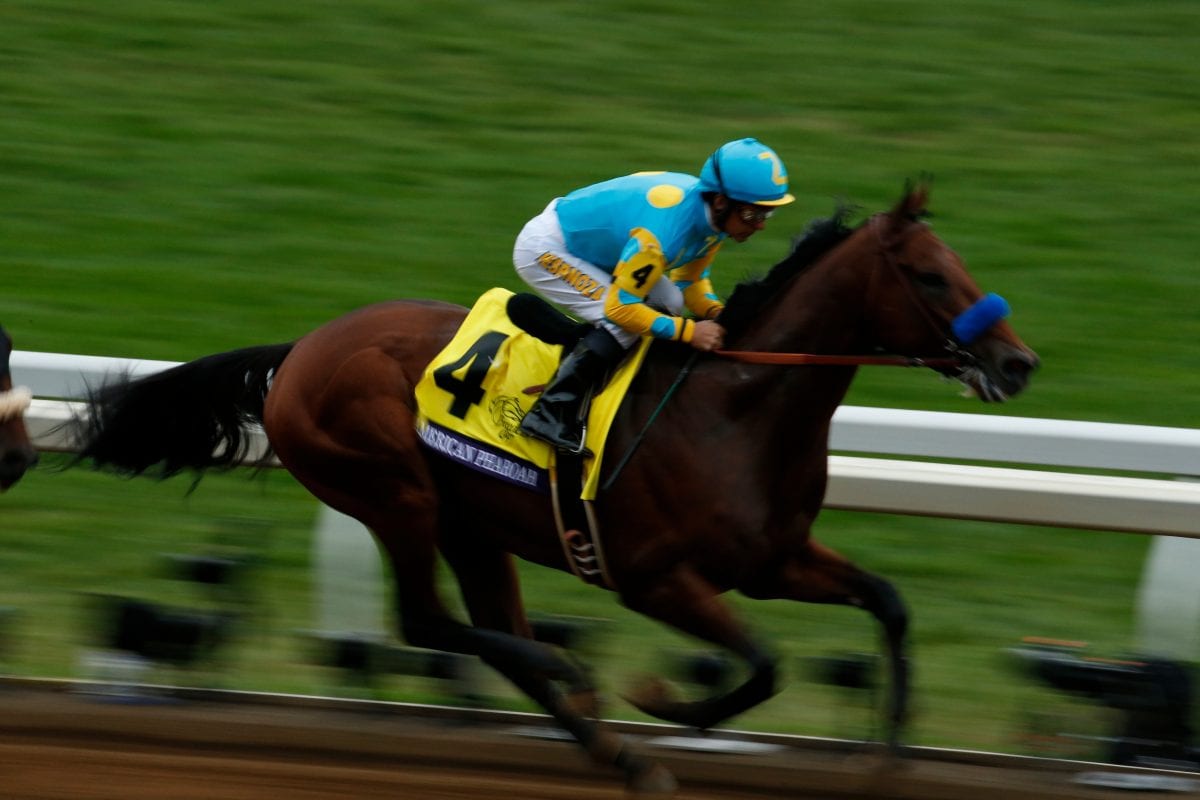 American Pharoah was a blur in taking the 2015 Classic wire-to-wire. Photo by © Breeders’ Cup/Todd Buchanan 2015

Total purses and awards for the 2016 Breeders’ Cup, which includes 13 grade one races held over two days, will be a record $28 million.

This will be the first purse increases on any of the Breeders’ Cup races since 2006. From 2006 through 2015 the Breeders’ Cup Classic was contested for a purse of $5 million and the Turf carried a $3 million purse. In 2007, the Breeders’ Cup expanded to a two-day event and added three races to the card but purses for the existing Championship races remained the same.

The purse increases to both races were approved by the Breeders’ Cup Board of Directors in February.

In addition to the increase in purses, Breeders’ Cup will now pay down to the 8th finish position on every Championship race, increasing the number of horses who receive purse distributions from 40% of starters to 65%. Every international starter will receive $40,000 as a shipping stipend, and North American starters stabled outside of California will receive $10,000.

In January, the International Federation of Horse Racing Authorities (IFHA) published its Longines World’s Best Racehorse Rankings of the top 100 group1/grade 1 races based upon ratings averages over the past three years (2013-2015). The Breeders’ Cup Classic (124.33) was rated the world’s second highest race, trailing only the Qatar Prix de l’Arc de Triomphe (125.75) for the top spot. The Longines Breeders’ Cup Turf (122.50) was rated the world’s fourth highest race, just slightly behind the No. 3 slotted Juddmonte International Stakes (122.67).

Last year’s Breeders’ Cup Classic at Keeneland Race Course in Lexington, Ky., was won by the brilliant American Pharoah, who became North America’s first Grand Slam winner, taking the three Triple Crown races of the Kentucky Derby, Preakness Stakes and the Belmont Stakes, and the Classic in the same year. The 2015 Longines Breeders’ Cup Turf featured a thrilling international duel, as the determined filly Found (IRE), upset Golden Horn (GB), the European Horse of the Year, by a half-length.

“In our efforts to provide our horsemen and fans with the best product in international racing, we are pleased to announce purse increases for both the Classic and the Longines Turf beginning with this year’s event at Santa Anita,” said Craig Fravel, Breeders’ Cup President and CEO. “Since our inception, one of the founding principles of the Breeders’ Cup has been to offer unprecedented purses on our races as incentive to keep the stars of our sport on the track and extend their racing careers. While the Classic and the Turf mark our first purse increases to individual races since 2006, our goal is to continue to find ways to raise purse levels on our races in the future.”

Following Saturday’s Belmont Stakes, the Breeders’ Cup Challenge season gets into full swing for the second half of the year with a bevy of stars pointing to the $6 million Classic. Among them are the three Triple Crown race winners Nyquist (Kentucky Derby), Exaggerator (Preakness) and Creator (Belmont). The older runners are led by California Chrome, the 2014 Kentucky Derby and 2016 Dubai World Cup winner; Beholder, the two-time Breeders’ Cup champion and three-time Eclipse Award winning mare, and Frosted, who was a dominant winner of Saturday’s Metropolitan Handicap at Belmont.

The first of seven Breeders’ Cup Challenge series automatic qualifying races for the Classic begins this Saturday at Churchill Downs with the Stephen Foster Handicap. Effinex, runner-up to last year’s Breeders’ Cup Classic winner to American Pharoah, is among those expected to start.