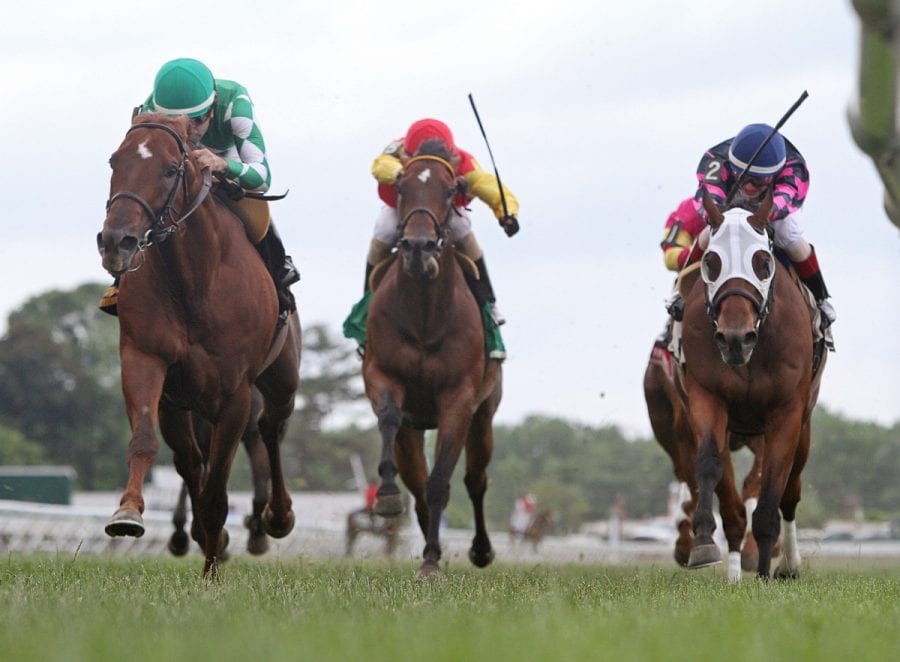 Score another for Virginia-breds.

Middleburg, bred in the Old Dominion by Mr. and Mrs. Bertram Firestone, registered a neck victory in the Grade 3, $100,000 Red Bank Stakes Sunday at Monmouth Park, continuing a good weekend for Virginia-breds.

On Saturday evening, Sweet Victory, a sophomore filly bred in Virginia by William Backer, won the $200,000 Penn Oaks.  In the Red Bank, another Backer-bred, Rose Brier, finished third, just a length behind the winner.  And Stellar Wind ran second, behind superstar Beholder, in the Grade 1 Vanity Mile at Santa Anita Saturday.

Trained by Christophe Clement, Middleburg, who won last year’s Grade 3 Cliff Hanger at Monmouth, now has two graded victories among his six career wins (from 19 starts).  The son of Lemon Drop Kid is just shy of $430,000 in career earnings.  Middleburg, out of the Spectrum mare Rum Charger, is a half-brother to multiple Grade 1-winning millionaire Winchester.

On Sunday, longshot Fredericksburg set sail for the early lead with Rose Brier in hot pursuit, just a head behind after each of the first three calls.  Fredericksburg carved out a half-mile in 47.46 seconds and three-quarters in 1:10.38.

Middleburg, who found a cozy rail spot in the early going, tipped out to the three path under jockey Joe Bravo, reached the front near the sixteenth pole, and held off the late-to-the-scene Vyjack by a neck.  Rose Brier, who led entering the lane, stayed on willingly to be third, just a length behind the winner.  Running time for the flat mile over firm turf was 1:33.62.

“This horse is just so good,” said Bravo.  “We got the perfect trip in behind horses and he settled great.  Around the turn we moved to the outside and he just ran those horses down.”

It was also the second stakes win of the weekend for Bravo, who also won aboard Take Cover in the $150,000 Pennsylvania Governor’s Cup Saturday.