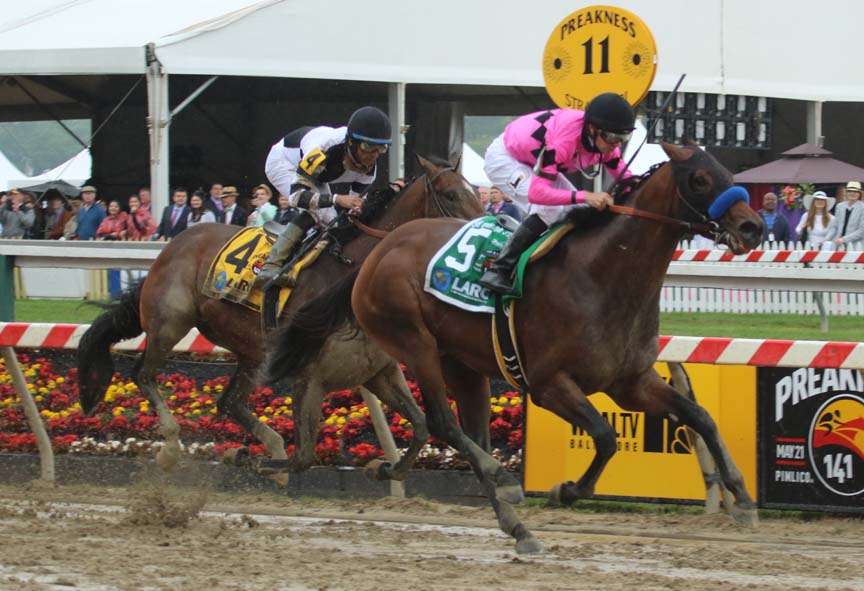 Putting his heart as well as his talent on display, Gary and Mary West’s American Freedom fought off challenges from start to finish to win the $100,000 Latin American Racing Channel Sir Barton Stakes by a length Saturday at Pimlico Race Course.

The 19th running of the 1 1/16-mile Sir Barton for 3-year-olds was the second stakes victory of the day for Hall of Fame trainer Bob Baffert, following the $100,000 Chick Lang, also for sophomores, with Justin Squared.

Baffert, who will go for his record-tying seventh victory in the 141st Preakness Stakes (G1) with Collected, won the Sir Barton in 2015 with Fame and Power.

American Freedom ($4.60), sent off as the 6-5 favorite in a field of 10, tracked early pacesetter Fearless Dragon through a quarter-mile in 23.47 seconds before taking over the top spot after a half in 47.50.

“I just told Florent (Geroux) to be aggressive and get him into it,” Baffert said.

From there, the bay Pulpit colt turned away bids from Donegal Moon to his outside approaching the lane and then Voluntario along the rail in mid-stretch for his first stakes victory in three lifetime starts. The winning time was 1:44.85 over a muddy main track.

“I let [Fearless Dragon] get out and do his thing and kept my horse comfortable,” Geroux recounted.  “I figured I’d catch him later. When horses came at me, he responded very well and was very game all the way to the wire.”

Dazzling Gem, who was under Preakness consideration until recently, finished third, his late rally finishing a couple of lengths short.

“It was a good effort,” said Brad Cox, who trains the Misremembered colt.  “I was a little disappointed we didn’t get a little more, but this horse is all right. We’re still kind of figuring him out a little bit.”