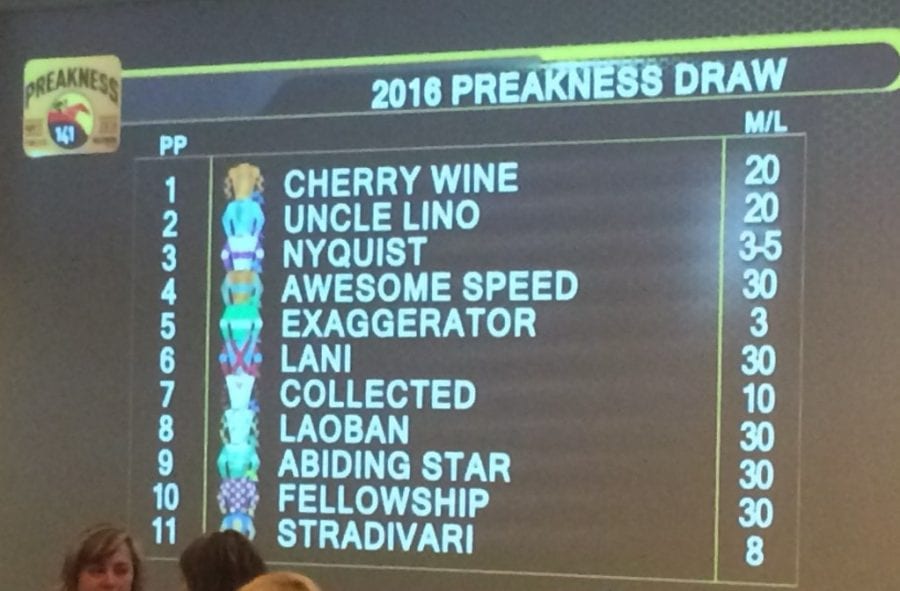 Nyquist, the undefeated Kentucky Derby winner, will enter the Preakness Stakes as the 3-5 morning line favorite and break from post number three, it was announced at the Preakness post position draw Wednesday evening.

Nyquist, who will have regular rider Mario Gutierrez in the irons, will have a pair of 20-1 shots to his inside.

Cherry Wine, the late-running Dale Romans trainee who finished third in the Grade 1 Bluegrass Stakes, will break from the rail.  Uncle Lino, who lodged a front-running score in the California Chrome Stakes at Los Alamitos, will break from post two.

The former, trained by Keith Desormeaux and scheduled to be ridden by his brother Kent, scored his top victory in the Grade 1 Santa Anita Derby when he romped home six lengths clear.  He has won four of 10 starts and earned over $2 million and is lined at 3-1.  He will break from post number five.

Stradivari, trained by Todd Pletcher, has made just three career starts.  After finishing fourth on debut, in November at Aqueduct, he has won both of his subsequent starts, by a combined 25 lengths.  After a break following his December maiden score, he returned to action in April at Keeneland, when he won by 14.  He is 8-1 on the morning line and will break from post number 11, the farthest outside.

The rest of the field all have double-digit odds.