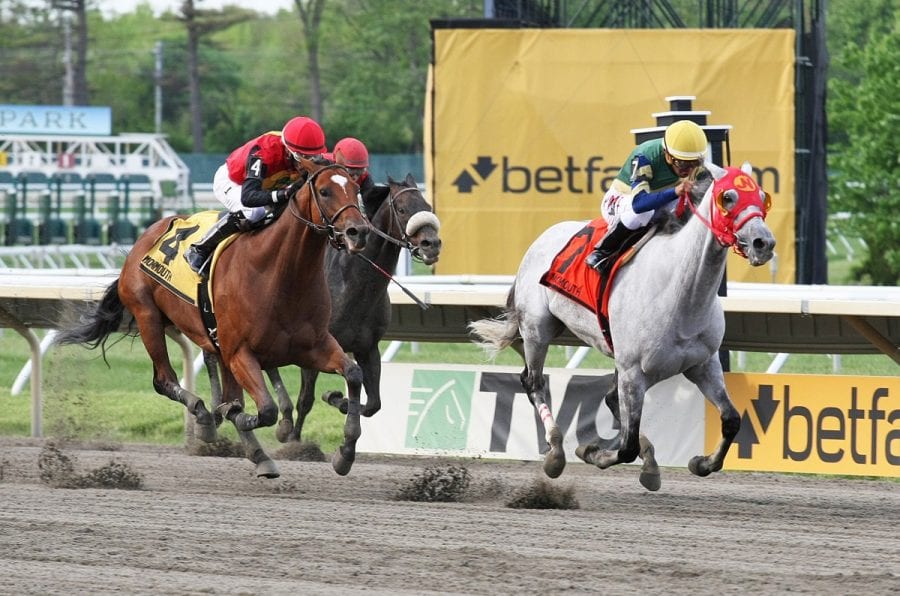 A.P. Indian (#4) was put up over Delta Bluesman (#7) by disqualifcation in the Decathlon Stakes. Photo By Ryan Denver/EQUI-PHOTO.

An enthusiastic crowd of 11,416 spurred a successful Opening Day at Monmouth Park, who ushered in its 71st season of racing on Saturday. On the racetrack, A.P. Indian scored a repeat, taking the $75,000 Decathlon Stakes after the first place finisher, Delta Bluesman was disqualified and placed fifth and last.

“What a great day and a terrific start to the meet,” said Dennis Drazin, advisor to the New Jersey Thoroughbred Horsemen’s Association and Darby Development LLC, operators of the racetrack. “If today’s attendance is any indication of what’s to come, we should be set for another great season.”

Saturday’s attendance represented a 2.5% increase over last year’s Opening Day crowd, which was 9% better than the year before.

The day’s feature saw Delta Bluesman take command early in the six furlong stakes event and hold off A.P. Indian all the way to the wire. Delta Bluesman was subsequently disqualified after the stewards adjudged that he interfered with A.P. Indian and Seeking the Sherif going up the backstretch.

“He’s been doing very well,” said winning trainer Arnaud Delacour. “I thought that he could run his best race right away. With his running style, he likes to be right there on the lead and challenging. Today he was taken out of that and it messed him up a little bit, but he certainly ran great today. It was a very nice come back race.”

Winning rider Daniel Centeno said, “I do think I lost my chance on the backside. The seven (Delta Bluesman) came over on me and I lost position. My horse kept running and tried hard, but after what happened on the backside it was too much to overcome.”

The winning time for the Decathlon was 1:09 2/5. A.P. Indian, a 6-year-old gelding by Indian Charlie from the A.P. Indy mare Ender’s Sister, last raced on Oct. 2 at Keeneland, finishing fifth against sprint champion Runhappy.

In the colors of Green Lantern Stable LLC, A.P. Indian is now a perfect two-for-two at Monmouth, both those coming in the Decathlon Stakes. He has now earned $247,434 for his connections.