Rudy Rodriguez to have Laurel string 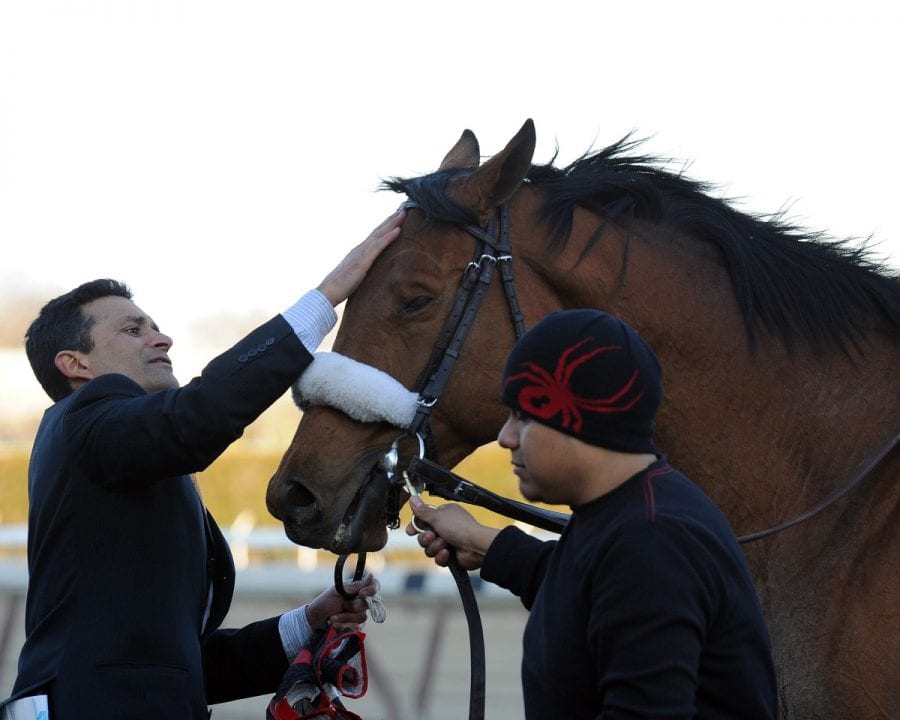 New York-based trainer Rudy Rodriguez plans to keep a large string of horses in Maryland this summer and visited Laurel Park this week to check out his new surroundings.

Rodriguez said he shipped a dozen horses to Laurel on Tuesday and plans to send another dozen or so this weekend, with more to come next week.

“I’m going to ship another 12 on Saturday or Sunday and maybe Tuesday or Wednesday ship another 12 or 20. That’s the way we’re moving,” Rodriguez said. “Now we just have to do good. We’re looking to bring 35, maybe 40 horses over there this summer. Hopefully we can get lucky and win some races.”

“We don’t complain. The winter was very, very good to us,” he said. “Right now we’ve got to regroup but hopefully we can do some good and then we can stay in Maryland year-round.”

Rodriguez said he is considering All Star Red for the $150,000 Maryland Sprint Championship (G3) for 3-year-olds and up going six furlongs on dirt on the Preakness undercard May 21. The 4-year-old colt has five wins from nine lifetime starts, most recently rallying for an impressive second-level allowance win April 13 at Aqueduct. He has yet to try stakes company.

In 2013, Rodriguez shipped in from New York to win the Maryland Sprint Championship with Sage Valley.

“We are thinking of the sprint. We’re going to see if we can take a chance in that race. I have to see what the race looks like and then take it from there,” he said. “He really surprised me [last time]. The race was much, much better than I expected and the owners want to take a chance in the stake so we might as well do it. We’ll see what he shows us and if anything we can go back to non-winners-of-three. I won that race before so hopefully we can get lucky again, you know?”

There is also a chance that Michael Dubb, Bethlehem Stables and Michael Imperio’s Katniss the Victor may show up in the $250,000 Black-Eyed Susan (G2) for 3-year-old fillies on Preakness Eve, May 20, Rodriguez said.

Also coming off an allowance win March 24 at Aqueduct, the daughter of 2007 champion sprinter Midnight Lute was second by a nose in the Maddie May Stakes for New York-breds and third in the open Busher Stakes this year.

“The owners, sometimes they want to do something, so I’m going to check it out and see how the Black-Eyed Susan comes up and we’ll take it from there,” he said. “She won her maiden going long and she won the non-winners of one long. I don’t know if she’s that type of horse but I think she’s a stakes horse with New York-breds.”

Rodriguez joins Marcus Vitali in shipping a stable of horses to Laurel. Vitali, the third-leading trainer during Gulfstream Park’s Championship Meet with 25 wins, moved 36 horses to Laurel three weeks ago.