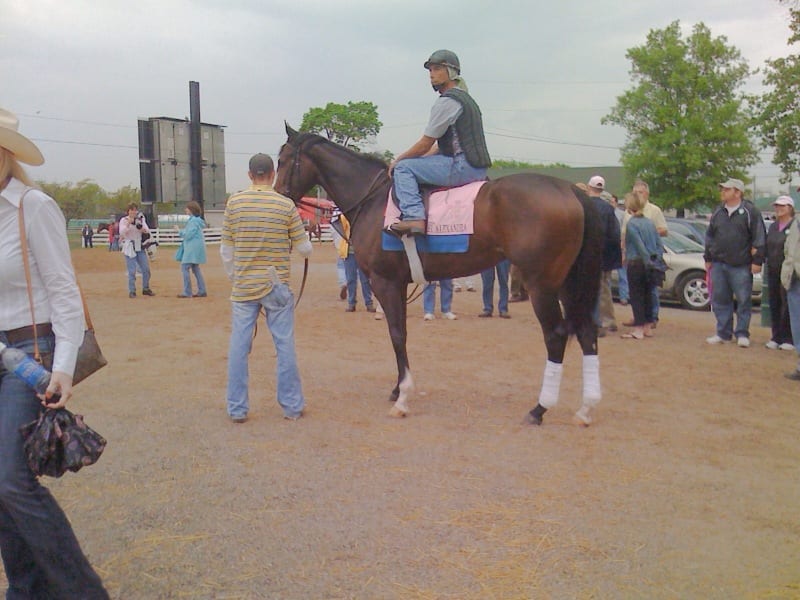 Rachel Alexandra the day before the 2009 Kentucky Oaks.

From a National Museum of Racing and Hall of Fame release

Champion racehorses Rachel Alexandra and Zenyatta, multiple Eclipse Award-winning jockey Ramon Dominguez and multiple Eclipse Award-winning trainer Steve Asmussen have been elected to the National Museum of Racing’s Hall of Fame in the contemporary category. The electees will be inducted into the Hall of Fame on Friday, Aug. 12 at 10:30 a.m. at the Fasig-Tipton sales pavilion.

Rachel Alexandra (Medaglia d’Oro—Lotta Kim, by Roar) was named Horse of the Year and Champion 3-Year-Old Filly in 2009 and posted a career record of 13-5-0 from 19 starts and earned $3,506,730. Bred in Kentucky by original owner Dolphus Morrison, Rachel Alexandra was trained by Hal Wiggins until a private sale to Jess Jackson’s Stonestreet Stables and Harold McCormick following her 20¼-length victory in the 2009 Kentucky Oaks. From then on, she was trained by fellow 2016 Hall of Fame inductee Asmussen. After being ridden by Brian Hernandez early in her career, Rachel Alexandra was piloted by Hall of Famer Calvin Borel for her final 14 career starts.

As a 2-year-old in 2008, Rachel Alexandra broke her maiden in her second career start at Churchill Downs, added an allowance win at Keeneland and returned to Churchill to conclude her season with a win in the Grade 2 Golden Rod Stakes (setting a stakes record) in her first pairing with Borel. She posted a record of 3-2-0 from six starts and earnings of $201,440 as a juvenile.

As a 3-year-old in 2009, Rachel Alexandra delivered a perfect record in eight starts. She won at seven different tracks that year, starting with a victory in the Martha Washington Stakes at Oaklawn Park. She then won the Fair Grounds Oaks and Fantasy Stakes prior to her 20¼-length win in the Kentucky Oaks. Asmussen and her new ownership then entered Rachel Alexandra in the Preakness, in which she became the first filly to win the second jewel of the Triple Crown since 1924 when she defeated Kentucky Derby winner Mine That Bird. Rachel Alexandra then romped by 19¼ lengths in the Mother Goose, defeated Belmont Stakes winner Summer Bird in the Haskell Invitational by six lengths and topped older males in a dramatic Woodward victory at Saratoga to conclude her undefeated campaign. Her sophomore ledger was 8-0-0 from eight starts with earnings of $2,746,914. She was named Horse of the Year and Champion 3-Year-Old Filly.

Rachel Alexandra returned as a 4-year-old in 2010 and finished second in her first two starts, the New Orleans Ladies Stakes and the La Troienne. She then won the Grade 2 Fleur de Lis Handicap and the Lady’s Secret Stakes before finishing second in the Personal Ensign, her final career start. She finished the season with a record of 2-3-0 from five starts and earnings of $558,376.

Zenyatta (Street Cry—Vertigineux, by Kris S.), who posted a career mark of 19-1-0 from 20 starts and earnings of $7,304,580, was named Horse of the Year in 2010 and won a total of four Eclipse Awards in her career. Bred in Kentucky by Maverick Production, Ltd., Zenyatta was a $60,000 purchase by Jerry and Ann Moss at the 2005 Keeneland September yearling sales. Trained throughout her career by John Shirreffs and ridden by Hall of Famer Mike Smith in 17 of her 20 starts, Zenyatta was named Champion Older Female in 2008, 2009 and 2010 along with her 2010 Horse of the Year honor.

Zenyatta arrived at the races late in 2007 as a 3-year-old, winning both of her starts at Hollywood Park. From that point on, she competed exclusively in graded stakes events, winning 17 consecutive such races to run her record to wins 19 without a defeat. At 4, Zenyatta won the El Encino Stakes, Apple Blossom Handicap, Milady Handicap, Vanity Handicap, Clement L. Hirsch Handicap, Lady’s Secret Stakes and Breeders’ Cup Ladies’ Classic. She finished the season with a record of 7-0-0 from seven starts and earnings of $2,090,580, winning the first of three consecutive Eclipse Awards as Champion Older Female.

In 2009, at age 5, Zenyatta repeated in the Milady, Hirsch and Lady’s Secret and defeated the likes of Gio Ponti, Summer Bird, Twice Over and Colonel John to become the first filly or mare to win the Breeders’ Cup Classic and earn her second straight Eclipse for Champion Older Female with a record of 5-0-0 from five starts and earnings of $3,330,000.

As a 6-year-old in 2010, Zenyatta won the Santa Margarita Invitational, her second Apple Blossom, and third Vanity, Hirsch and Lady’s Secret. She was undefeated in 19 career races before suffering her lone defeat to Blame in the Breeders’ Cup Classic in what was her final career start. With a record of 5-1-0 from six starts and earnings of $1,830,000, she was named Horse of the Year and earned her third consecutive Champion Older Female award. Overall, Zenyatta won a total of 17 graded stakes, including 13 Grade 1s.

Prior to settling in New York, Dominguez was the leading rider at Delaware Park from 2004 through 2007 and won multiple meet titles at Laurel Park and Pimlico in Maryland. He won a total of 160 graded stakes and currently ranks 17th all time in earnings and 32nd in wins.

Asmussen trained Curlin to Horse of the Year honors in 2007 and 2008 and Rachel Alexandra to the Horse of the Year title in 2009. With Curlin, Asmussen won the Preakness, Breeders’ Cup Classic, Woodward, Stephen Foster, Arkansas Derby, Rebel and two editions of the Jockey Club Gold Cup. He won a third Jockey Club Gold Cup with Haynesfield. Asmussen’s key wins with Rachel Alexandra included the Preakness, Woodward, Haskell Invitational and Mother Goose. Asmussen has also trained the champions Kodiak Kowboy, My Miss Aurelia and Untapable.

Asmussen earned his record 17th leading trainer title at Churchill Downs in the 2015 fall meeting. He has won 13 training titles at Fair Grounds, 11 at Remington Park, 11 at Lone Star Park, eight at Sam Houston and six at Oaklawn Park. He was the first trainer to surpass 1,000 wins at Lone Star. Asmussen has won a total of 190 graded stakes. He has two prospects for this year’s Kentucky Derby in Gun Runner (winner of the Louisiana Derby) and Creator (winner of the Arkansas Derby).

The contemporary electees were chosen from a nationwide voting panel comprised of 188 racing writers, broadcasters, industry officials and historians from a group of 10 finalists selected by the Hall of Fame’s 16-member Nominating Committee.

Results of the Hall of Fame’s Historic Review and Pillars of the Turf categories will be announced in May.