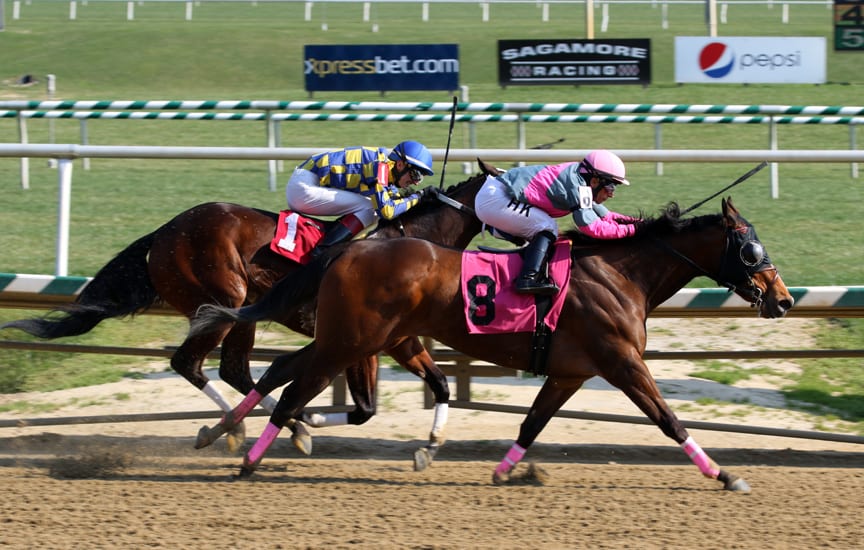 Lady Sabelia, in what would be her final start, wins the Primonetta Stakes at Laurel Park. Photo by Laurie Asseo.

The injury marks a disappointing end to a stellar career.  The six-year-old by Majestic Warrior won 11 of 20 starts in her career and earned $740,465 and had been pointed to the mid-May Skipat Stakes at Pimlico.

“She was just galloping [Sunday morning at Laurel Park],” Graham said.  “She had done her first mile, when the exercise rider thought she had hit a stone, so she pulled her up and walked home.”

Once back at the barn, Graham said, “She was obviously a bit off — not badly.”

Xrays, however, revealed that she had fractured the “inside sesamoid of her left front ankle,” Graham said.

Graham and owners Mr. and Mrs. Frank Wright immediately made the decision to retire her.  She will be bred next year.

“Obviously, it’s disappointing,” Graham said.  “But on the other hand, if something like this was going to happen, this was absolutely the best case scenario.  It may have saved her life.”

Lady Sabelia debuted at two but did not break her maiden until her fourth career start, in October of her three-year-old season.  In her very next start, she won the Safely Kept Stakes at Laurel Park.

Starting in October 2014, Lady Sabelia put together the best streak of her career, winning four consecutive races, a run that included three stakes wins and was capped off by her dominant, front-running score in the Fritchie.

In 2016, she had a win and a third from two starts.  She ran third as the favorite in the Fritchie and then, in what turned out to be the final race of her career, lodged a surprisingly tough score in the Primonetta Stakes at Laurel Park.

Lady Sabelia, a product of several generations of Wright breeding, struggled with an autoimmune disorder throughout her career which affected her right eye.  Though it was generally controlled with the application of the non-steroidal anti-inflammatory medication Banamine, Lady Sabelia nevertheless ran with a goggle over that eye.

She was a daughter of the Citidancer mare Terra Maria, who in turn was out of Miss Rolla Punch, by Two Punch.  Terra Maria and Miss Rolla Punch were both bred by the Wrights, who had purchased the latter’s dam, Sour Dancer (Masked Dancer-Too Sweet, by Sunglow), at a 1982 yearling sale.

The Wrights were understandly disappointed, Graham said, but, she added, “Mrs. Wright couldn’t have been any nicer or taken it any better.”