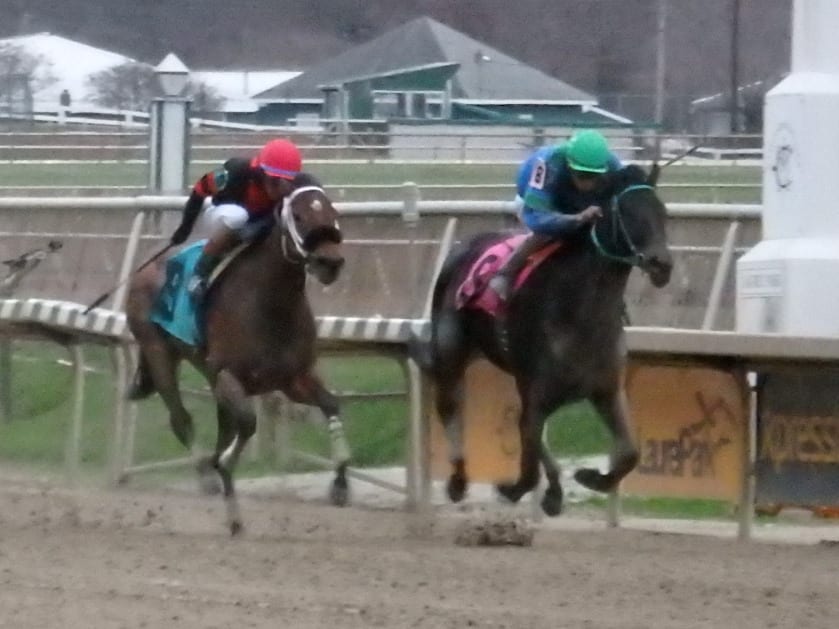 James W. Arrison’s Flattering Bea takes her second crack at becoming the first horse to win the $150,000 Sugar Maple presented by CANTER Mid-Atlantic twice when she takes to the gate with eight other fillies and mares on Saturday in the most lucrative undercard race on the 13 race Charles Town Classic program. The Sugar Maple is scheduled as Race 11 on the program that includes seven stakes and gets underway at a special afternoon start time of 12:45 P.M. EST.

In 2014, Flattering Bea notched the biggest win of her career in the Sugar Maple when she outdueled Quiet Success to win the race by neck. However, 2015 wasn’t as kind to Flattering Bea as the results were reversed and saw her on the wrong end of a narrow finishing margin as she came up a neck short against Taketheodds in her quest for a repeat

This time around, the Crystal Pickett trainee will be attempting to win the Sugar Maple in a manner she has yet to try – off a layoff. Last seen finishing third in the $100,000 Pink Ribbon at Charles Town in September 2015, this will be the third time the now six-year-old has run in a stake after a layoff of three months or longer with the previous two resulting in off the board finishes. Still, Pickett isn’t deterred and has no reason to believe age will factor into how competitive the earner of more than $400,000 will be in 2016.

“She’s doing fantastic,” said Pickett who splits her time between her farm in Florida and the Mid-Atlantic tracks. “She was laid up in Ocala at my farm for the winter because there aren’t any races for her after the Pink Ribbon. But she’s sound and lightly-raced, so we felt like she could come back and be successful. She breezed twice with Jose [Montano}. We were hoping for a prep, but it didn’t fill. We know she likes this track.”

Flattering Bea’s record at Charles Town certainly speaks to that affinity as she’s posted 6 wins in 10 starts there with only her only off the board finish coming on an off track in the 2013 Pink Ribbon.

Jose Montano has the mount on Flattering Bea in the Sugar Maple.

Morning line favorite Athena ships up from her Churchill Downs base for trainer Helen Pitts and comes to Charles Town riding a three race winning streak with her most recent victory coming in the Thirty Eight Go Go at Laurel Park the day after Christmas.

After a pair of starts on the turf that didn’t produce the results Pitts wanted, the daughter of Kentucky Derby winner Street Sense was sent back to the dirt where a reversal of form ensued with the three straight victories, including a pair in Churchill Downs allowance races prior to her first career stakes score. While Athena comes into the Sugar Maple off a layoff much like Flattering Bea, her trainer also doesn’t appear concerned.

“We freshened her up at Churchill, and it seems like the break has really made a difference,” said Pitts who has enlisted the services of jockey Javier Castellano for the Sugar Maple. “She’s really come around in her last three starts. It looks like a very competitive race on paper. Flattering Bea is a tough local filly for Crystal [Pickett], so it should be a good race.”

Others in the field who figure to garner support include recent Aqueduct allowance winner Making Havoc, 2016 What a Summer runner-up Raging Smoke, Walk of Stars who defeated Flattering Bea and others in winning the 2015 Pink Ribbon at Charles Town and Sweet on Smokey, a recent runaway 10 1/2 length victor of the Videogenic at Aqueduct.

Lake Sebago, Dallas Cowgirl and Magnificent Margo, who will be competing at the tenth different track in her last ten starts on Saturday, complete the lineup.

The Sugar Maple presented by CANTER Mid-Atlantic is schedule to go postward at 5:20 P.M. EST and is the penultimate race in a $100,000 guaranteed all-stakes Pick 4 which commences in Race 9.