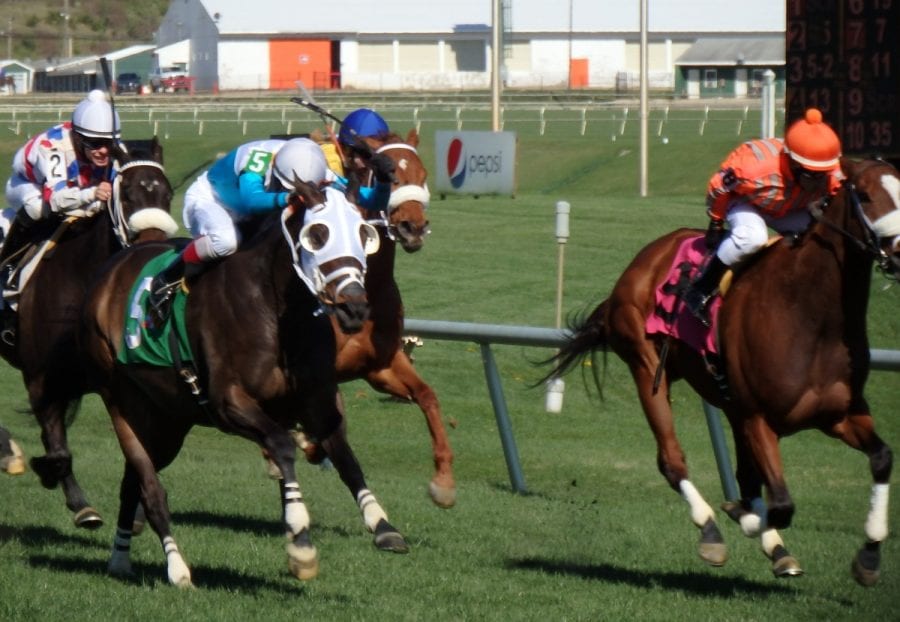 Since her debut two years ago, Hope Cross has raced exclusively in New York and South Florida with moderate success, winning three of 14 starts and $268,830 in purse earnings, also placing in a pair of stakes including a runner-up finish in the 2015 My Charmer (G3) at Gulfstream Park West.

Looking to get the 5-year-old mare a change of scenery, owner Magalen O. Bryant moved Hope Cross to the barn of Arnaud Delacour this winter. She will make her debut for the Fair Hill-based trainer in Saturday’s $75,000 Dahlia Stakes at Laurel Park.

Run at one mile on the turf course, the Dahlia drew a field of 13 and is carded sixth (3:53 p.m. ET) on the 10-race program which includes the first 2-year-old race of the year. The $40,000, 4 ½-furlong race for maiden 2-year-olds will kick off the program, which averages more than 10 starters per race.

The Dahlia will be the first race for Hope Cross since rallying from off the pace to finish fifth in the Sand Springs Stakes Feb. 27 at Gulfstream Park. It was her third start during the track’s Championship Meet, having run fourth in the Marshua’s River (G3) Jan. 9 and second by 1 ¼ lengths as the favorite in the South Beach Stakes Dec. 12.

“She came in about a month ago. The owner thought that she would benefit from running in other places so this was a logical place to go,” Delacour said. “I was thinking myself that if I liked the way the filly trained and the way she breezed then I would proceed with her in this race. We’ve breezed her three or four times and I’ve been pleased with that. She shipped last week from Florida and she’s at Fair Hill right now. She had a good breeze over the Tapeta there.”

Hope Cross breezed three times since mid-March at Delacour’s winter base of Tampa Bay Downs before a half-mile work in 49 seconds April 9 over the all-weather track at Fair Hill, fourth-fastest of 30 horses.

“Always a little bit when you receive a horse like that you want to see how they are and how they fit in. She came in in great shape. All we had to do was just manage her breezes and make sure we kept her happy. She looks good. We’ll learn a lot more about her in the race,” Delacour said. “She seems to be a pretty consistent filly anywhere she goes, so we’ll see how she does. In my opinion, the Laurel Park track is always very forgiving. It’s a good turf course.”

Though she came from well off the lead in her last start, Hope Cross has also shown an ability to run closer to the front if necessary. Forest Boyce will be aboard for the first time from post nine; all fillies will carry 118 pounds.

“She comes from behind on the fast pace but on the form it looks like she can be pretty close to the front if she needs to. I’ll leave it up to the jock. She’s a good tactical rider,” Delacour said. “She’s a gutsy little filly. She’s not very big but she’s a great mover and she seems to have a lot of heart. I think she’ll fit in a race like that and we’ll take it from there.”

A week after Awesome Speed earned an automatic berth to the 141st Preakness (G1) May 21 by virtue of his victory in the $100,000 Federico Tesio Stakes April 9, trainer Alan Goldberg has Colts Neck Stables homebreds Bride to Be and Means Well entered in the Dahlia.

Bride to Be, a 4-year-old daughter of Candy Ride, has finished first or second in five career starts including back-to-back allowance wins over the winter at Gulfstream Park, the latter at the Dahlia’s one mile. She opened the year running second Jan. 24 at Gulfstream, her first start in 10 months, and is making her stakes debut.

“She shipped up good and she’s doing well,” Goldberg said. “The races, they didn’t have a lot of speed in her last couple so we put her in the race early. She doesn’t have to be on the lead but she’s got enough speed where she’s usually forward. I think the mile is fine. She’s doing good and we might as well try and give her a little black type if we can.”

A 5-year-old Smart Strike mare, Means Well has previous stakes experience having run in a trio of Grade 3 events last summer finishing fourth once and fifth twice, never beaten more than four lengths. She raced three times at Laurel in the fall of 2014 with one second and one third, and has not started since running last of eight in a one-mile optional claiming allowance Nov. 26 at Aqueduct.

“Means Well kind of tailed off at the end of last year but she’s usually pretty good fresh so we might as well run her right in a stakes,” Goldberg said. “She’s doing pretty well and she’s training good. I don’t know how fit she is because we haven’t been able to get her on the turf course because of the weather.”

Jevian Toledo has the call on Bride to Be from outside post 13, while Trevor McCarthy is named on Means Well from post 6.