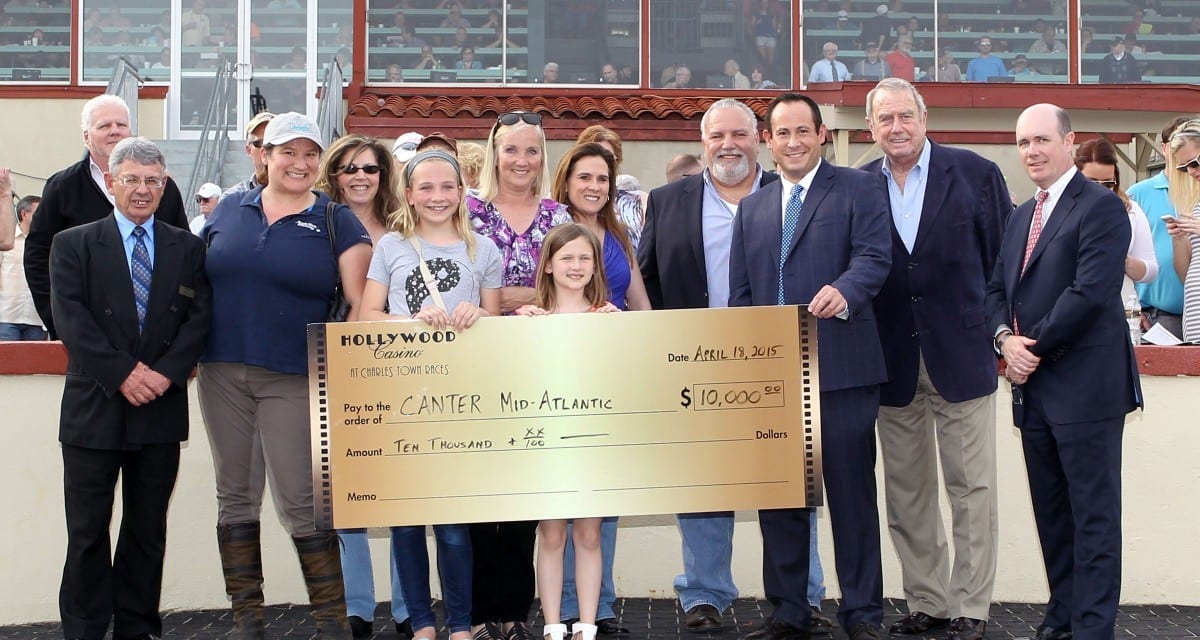 Virtually since day one, the Grade 2, $1,250,000 Charles Town Classic and CANTER Mid-Atlantic have been perfect together.  The charity has been an integral part of the card over the event’s first seven years, and 2016 will be no different as CANTER Mid-Atlantic will receive grant funding from Hollywood Casino at Charles Town Races for the eighth consecutive year. The $10,000 donation will be made in a check presentation during the Charles Town Classic card and will assist CANTER in furthering its ongoing programs and mission to help transition former race horses into their new careers off the racetrack.

In addition to supporting CANTER Mid-Atlantic’s free horse listing service, the renewed funding and commitment by Charles Town will allow CANTER to be a provider of emergency care for at-risk horses it would have otherwise been unable to take in.

“We continue to be impressed with the talent that ex-race horses bring to venues beyond the race track,” said CANTER Mid-Atlantic Executive Director, Allie Conrad. “The horses that have gone through the CANTER Mid-Atlantic (CMA) Phase II training program compete in recognized events throughout the Mid-Atlantic region, including Rolex in Lexington, Kentucky. Horses like 4-star competitor Anthony Patch, 3-star competitor Palm Crescent and novice horse Kiss a Monster are just a few former Charles Town race horses that are succeeding in competitive Eventing. And Cavalleria is a United States Hunter/Jumper Association medal winner.”

“This year CMA created the Warriors Claim Program as a way to serve wounded Veterans and show how ex-race horses have the heart to heal,” noted Conrad. “These horses – TrooperD, Pink Camo and Iamamandate – are making a difference in the lives of Veterans and their families. But none of this – the second careers for these horses – would happen without the wonderful dedication and support that we have received from Hollywood Casino at Charles Town Races.”

Having been granted access to the barn area for nearly two decades by Charles Town management, CANTER Mid-Atlantic’s volunteers have built strong relationships with not only track management, but also horse racing professionals on the backstretch. Those relationships have made it possible for CANTER Mid-Atlantic to assist trainers and owners in transitioning over 275 race horses a year into successful second careers using its free sales listing service.

“To say we’re appreciative of all the hard work CANTER Mid-Atlantic does in furtherance of putting horses having raced at Charles Town on the path to a new career once they leave the racetrack is an understatement,” said Charles Town’s Vice President of Racing Operations, Erich Zimny. “As they’ve done with the funding we’ve provided up to this point, we’re confident CANTER will put this grant to very good use in benefiting horses that have been under the care of trainers competing at our track.”

In addition to Charles Town again providing the grant to CANTER Mid-Atlantic, the organization will serve as the presenting sponsor for the richest of the undercard stakes for the fourth consecutive year – the $150,000 Sugar Maple. Since becoming the presenting sponsor of The Sugar Maple presented by CANTER Mid-Atlantic, the race has been won by Grade 1 winner and Eclipse Award finalist Dance to Bristol in 2013, multiple stakes winner Flattering Bea in 2014 and the Ian Wilkes trained Taketheodds in its most recent renewal.

“They deserve to be recognized when there are a lot of eyes on our track and we couldn’t be happier to give them that stage in April,” Zimny added.

Over the last several years, CANTER Mid-Atlantic has taken in hundreds of retiring racehorses as funding allowed and successfully rehabilitated, retrained and placed them into caring homes. Horses in CANTER Mid Atlantic’s care are boarded on farms deemed appropriate for the health and wellbeing of the horse. CANTER Mid-Atlantic is currently managing the care of 12 ex-race horses that have begun the rehabilitation and retraining process in order to prepare them for a second career. Financial support provided by Hollywood Casino at Charles Town Races will continue to strengthen these efforts.

CANTER Mid-Atlantic volunteers regularly visit Hollywood Casino at Charles Town Races in West Virginia, Pimlico Race Track in Baltimore, MD, and Laurel Park in Laurel, MD, to meet with trainers and owners of horses that are ready to retire from racing but are capable of beginning a second career.

For the second straight year, the check presentation to CANTER Mid-Atlantic will take place in the daytime hours as the Charles Town Classic card will again get underway at a special afternoon post time of 12:45pm EST.