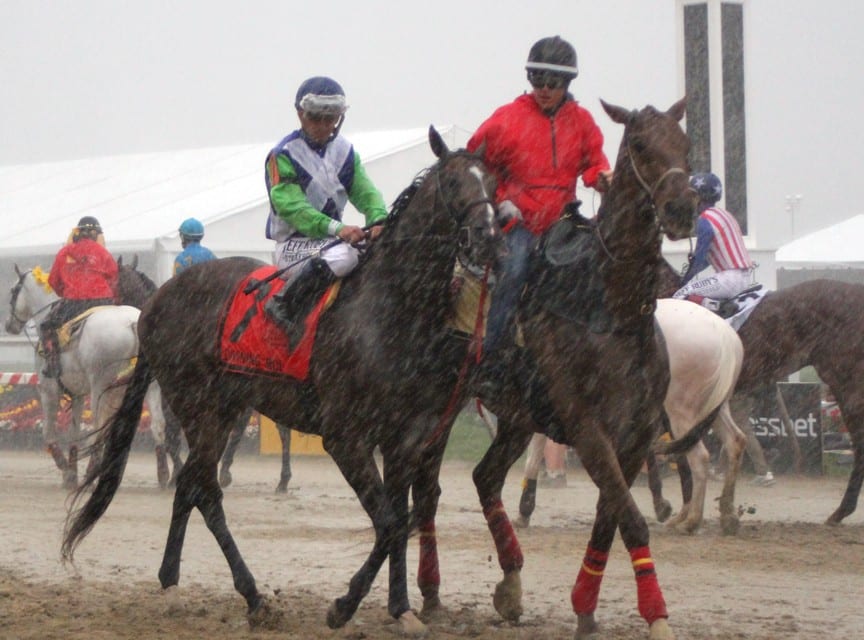 (Photo, of Divining Rod before the 2015 Preakness, by Laurie Asseo.)

From an America’s Best Racing release

America’s Best Racing (ABR) and the Maryland Jockey Club (MJC) announced today that the third annual Pre-Preakness Party will be held Wednesday, May 18, 2016, at The Mt. Washington Tavern in Baltimore and that the Thoroughbred Aftercare Alliance (TAA) will be the beneficiary of a charity raffle at the event.

The free party, sponsored for a second consecutive year by Sagamore Racing, will be held immediately following the post-position draw for the 141st running of the Preakness Stakes. The middle jewel of Thoroughbred racing’s Triple Crown will be contested Saturday, May 21, 2016.

The Preakness kickoff party was held for the first time in 2014, and it is designed to bring racing fans face to face with industry personalities. The charity raffle benefitting TAA will feature an array of prizes, including exclusive signed racing memorabilia, items from Sagamore Racing and tickets to both Black-Eyed Susan Day and Preakness Day at Pimlico Race Course.

Sagamore Racing, owned by Kevin A. Plank, the chairman of the board and chief executive officer of Under Armour, has been a supporter of ABR efforts since the fan-development initiative was created in 2013. The farm has previously hosted Preakness week events that provided ABR guests with a “behind-the-scenes” look at the Thoroughbred breeding and racing industry.

“Sagamore Racing is both proud and extremely excited the TAA has been designated as our event beneficiary,” Sagamore President Hunter Rankin said. “Because of their innovative approach, ABR brings a new audience to the sport. Their audience, along with all fans of the Thoroughbred industry, need to be aware of the great work the TAA performs every day.”

Based in Lexington, Ky., the nonprofit TAA accredits, inspects and awards grants to approved aftercare organizations to retire, retrain and rehome Thoroughbreds.

“The kickoff party has grown each year with our fans as well as our horsemen, and we’re delighted to help in raising awareness and funds for Thoroughbred Aftercare Alliance,” said Sal Sinatra, vice president and general manager of MJC. “I believe this event will be one of the highlights of Preakness week.”

“The TAA is thrilled to be the beneficiary of the charity raffle at this year’s event,” TAA President Jimmy Bell said. “Sagamore Racing, the Maryland Jockey Club and America’s Best Racing have demonstrated their commitment to aftercare and this will undoubtedly help expand awareness and support of the TAA.”