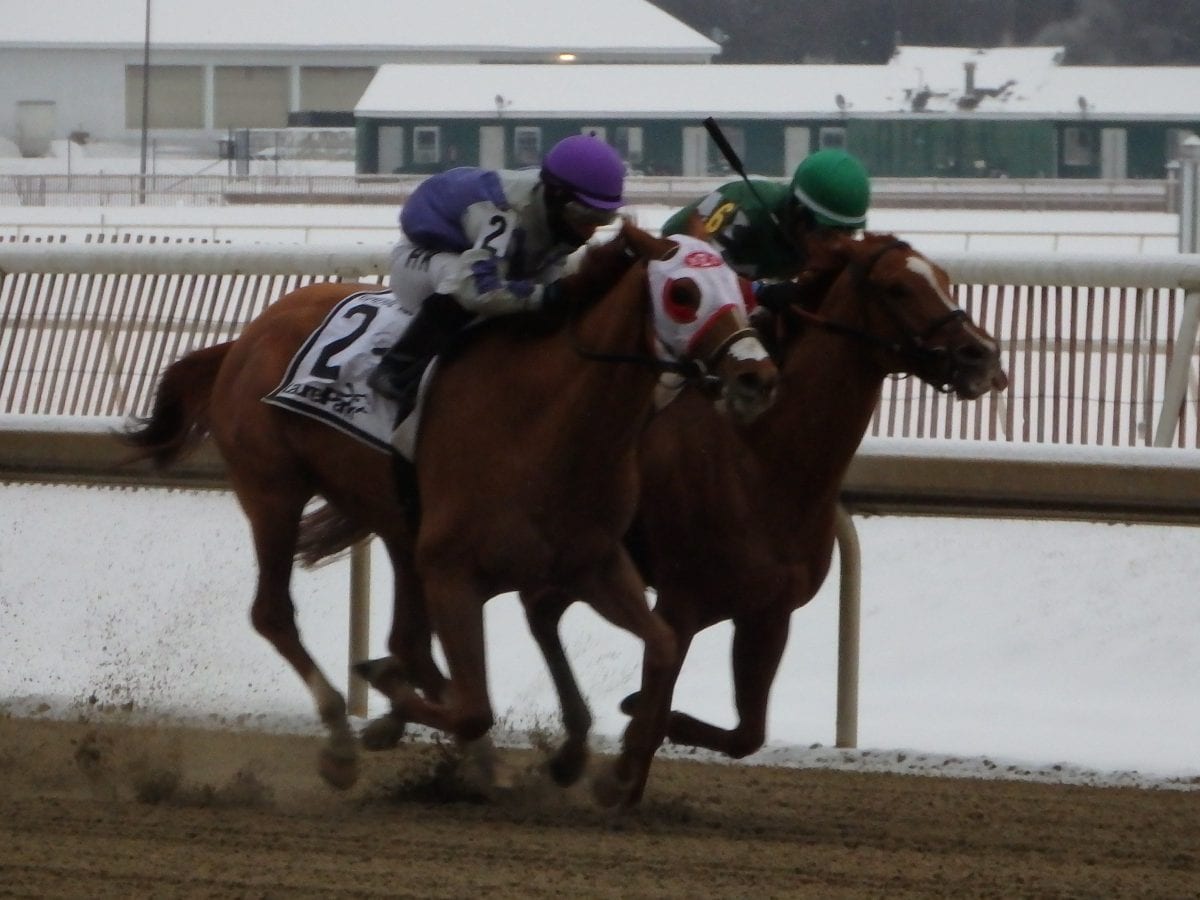 “We did it,” Eppler said with a big smile.

More precisely, Page McKenney, the six-year-old Eavesdropper gelding that Eppler, his trainer, has transformed from a mid-level claiming horse to a millionaire, had done it again.

Page McKenney, under a vigorous Karamanos ride from midway on the turn, wore down favored Majestic Affair in the stretch to post a head victory in today’s $250,000, Grade 3 General George Stakes at Laurel Park.

It was Page McKenney’s first graded win and 16th career victory, from 43 starts, and pushed his earnings north of $1.1 million.  It was his 23rd consecutive in-the-money finish.

For all that, it was his first win at a sprint distance, raising the question: what can’t this horse do?

“Every surface, he set a track record on the turf — it’s amazing what he’s done,” Eppler marveled.  “Just a cool  horse.”

Page McKenney broke sharply and found himself closer to the pace than Eppler expected, just a couple of lengths off the early lick of Green Gratto.  Green Gratto, the New Jersey-bred trained by Gaston Grant who won the Grade 3 Fall Highweight at Aqueduct three races back, pulled the field through a quarter mile in 23.30 seconds and a half-mile in 46.85 seconds.

That solid enough pace was made easier when longshot Warrioroftheroses, who figured to gun for the early lead, stumbled out of the break.  As a result, he was never involved in the race.

“I was sort of hoping he (Warrioroftheroses) would be pushing the three [Green Gratto] but that didn’t happen,” Eppler said.

Rounding the turn, Majestic Hussar, most recently second in the Fire Plug stakes here, moved to engage the leaders.  Meanwhile, Majestic Affair, trained by Chad Brown and with Kendrick Carmouche in the irons, and Page McKenney both seemed to be toiling to no avail, with the latter coming under the stick near the five-sixteenths  pole.

But when the horses straightened away for the run home, it was the two runners shortening up from route races, Majestic Affair and Page McKenney, just to his outside, who quickened best, while Green Gratto tired to fourth and Majestic Hussar to seventh in the eight-horse field.

“I have ridden a lot of nice horses, but this horse is all heart,” Karamanos said. “It was a big test today at seven-eighths.”

“Even if he did get beat, I was so proud of him for going out there and trying so hard,” Eppler said.

It was four lengths back from Majestic Affair, in second, to Sonny Inspired, who rallied into third.  Green Gratto held fourth.

It’s been a remarkable journey.  Owner Adam Staple and Eppler claimed Page McKenney for $16,000 in July 2013, picking him off of trainer Jazz Napravnik and owner Jalin Stable.

Staple subsequently allowed Jalin, which is the racing operation of Page McKenney’s breeders James Bryant and Linda Davis, to buy back into Page McKenney.

Since then, he’s won 15 of 24 starts, developing a strong local following, and placed in three prior graded events.  His success in cutting back to a sprint distance called to mind another local router who shortened up to win the General George.

“It’s like Little Bold John, 30 years ago,” said Mike LaRochelle, Eppler’s assistant.  “It’s the same thing.  They’re freaks.  They only come along once a generation.”