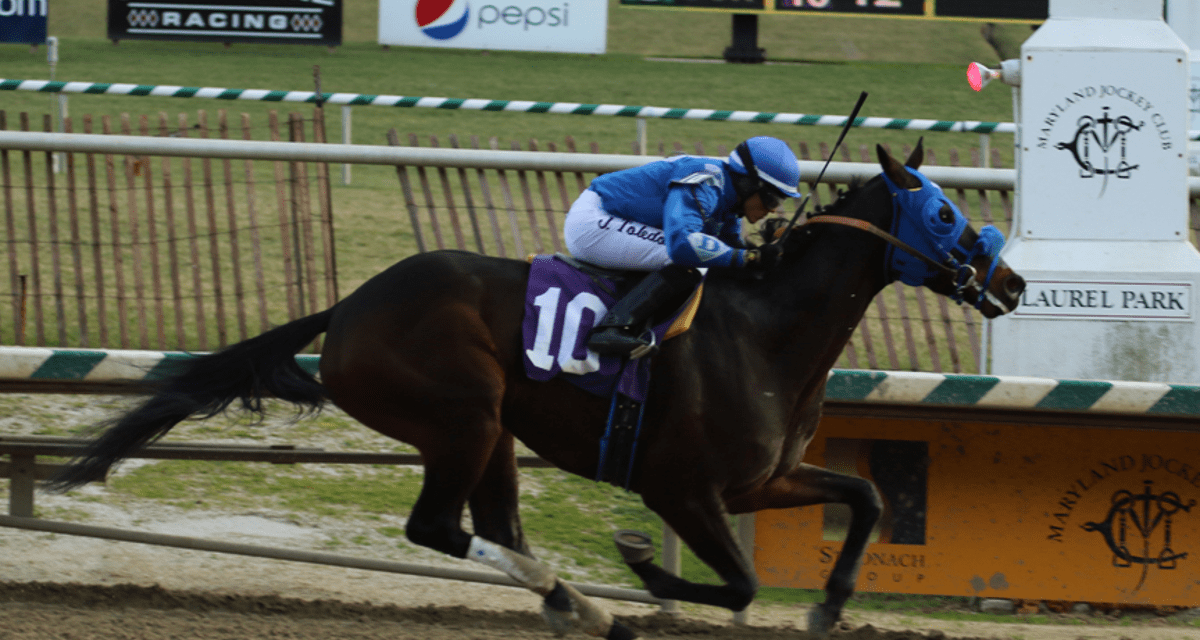 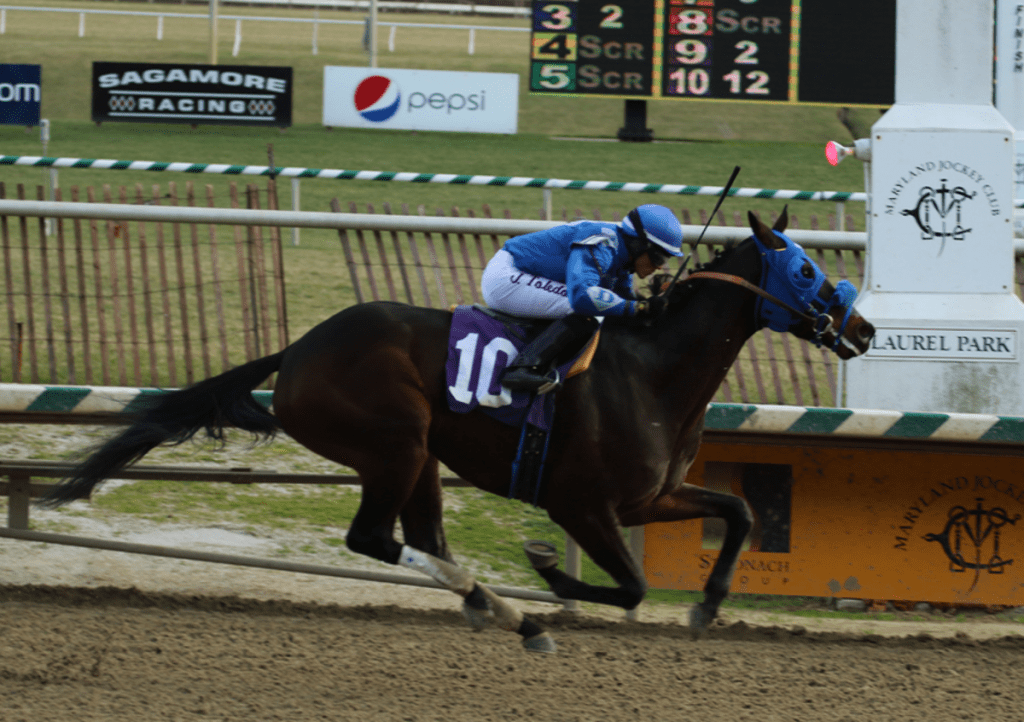 Sonny Inspired won the Fire Plug and will take a swing at the G3 General George. Photo by Laurie Asseo.

D Hatman Thoroughbreds’ Sonny Inspired is scheduled to seek back-to-back stakes victories when he takes on as many as 8 rivals in the $250,000 General George (G3) on Monday’s Presidents’ Day program at Laurel Park.

The 5-year-old gelding turned in a career-best effort while prevailing by 1 ¼ lengths in the six-furlong Fire Plug Stakes at Laurel Jan. 16 in a performance that caught his trainer more than a little off guard.

“I was as surprised as anybody in the grandstand. I wish I could tell you I was gung-ho and bet all my money. I was as surprised as anyone when he crossed the wire in front,” said trainer Phil Schoenthal of Sonny Inspired’s 12-1 upset. “The horse had a little bit of a history of being a hanger. He strikes the front and waits for horses or he’d run alongside another horse and not want to pass. You look at his PPs and it’s kind of clear he wins or loses by a nose, or if he’s third, it’s by a nose.“

As surprised as Schoenthal may have been, the Laurel-based trainer has reason to believe that the son of Artie Schiller is capable to running back to his thoroughly commanding triumph, in which he swept from fourth to first coming off the turn into the homestretch and drew away to his fifth victory in 27 starts. Sonny Inspired responded positively to a change in equipment that obviously aided in overcoming his reluctance to hang on the money.

“We had thought taking the blinkers off at this point in his life might help him overcome that and we couldn’t have been more wrong. He ran two subpar races in a row. We decided to put the blinkers back on him, but rather than putting the same ones on him we decided to go back to the other extreme and close them up as opposed to the smaller ones he had been wearing,” Schoenthal said. “It’s more a case of experimenting and tinkering than any great knowledge or wisdom or great horsemanship. It was more a case of, ‘Hey let’s try something different and see what happens,’ and he responded with an authoritative run.

“That was the first time probably in his life that he made the lead and kind of surged clear. When he made the lead at the top of the stretch, I expected him to kind of hang and wait on horses, and he didn’t. Certainly, it was the best race of his life from a racehorse perspective. It’s encouraging as a trainer that after four years of fooling around, we got the right formula for him.”

Sonny Inspired will be making his first graded-stakes start since finishing sixth in the Tom Fool Handicap (G3) at Aqueduct last March. Schoenthal is confident that the Maryland-bred gelding will be better suited in the seven-furlong General George.

“I feel like this time of year with the cold weather and how racetrack management has to be done – kind of keeping it on the deeper side of things – I feel like it’s a real home-track advantage training over the track,” said Schoenthal, who has named Jevian Toledo to ride Sonny Inspired again. “I feel like it being cold and the racetrack being as deep as it is right now, it plays into our advantage and it might even out whatever talent deficiency he might have compared to the favorites.”

Adam Staple’s Page McKenney, who is entered to run in Saturday’s $75,000 John B. Campbell, was entered by trainer Mary Eppler in the General George. The veteran two-turn performer, who went over the $1 million earnings mark while winning the 1-1/16-mile Native Dancer last time out, figures to enjoy home-court edge in either of the stakes.

“We’re just going to go over things. At this point, nothing is set in stone,” Staple said. “It would be an incredible achievement if he could even get a piece of a race that significant on Monday. What a feather in his cap. He wouldn’t have to win it to know that it’s a big deal.”

Regular rider Horacio Karamanos will have the mount aboard Page McKenney in either race.

Eppler and Staple will be represented in the General George should Page McKenney run Saturday. The trainer also entered Act of Madness, whom she and Staple claimed for $32,000 out of a second-place optional claiming allowance finish last time out.

Thomas Coleman and Doheny Racing Stable’s Majestic Affair, who captured the mile-and-70-yard Jazil Stakes at Aqueduct last time out, is scheduled to ship in from New York for the General George. The Todd Pletcher-trained 4-year-old captured the seven-furlong FrankWhitely Stakes at Laurel in January 2015. Aqueduct-based Kendrick Carmouche has the return mount aboard the son of Majesticperfection.

Gaston and Anthony Grant’s Green Gratto, who captured the Fall Highweight (G3) at Aqueduct Nov. 26, enters the General George off a close-up third in the Toboggan (G3) at Aqueduct last time out. Trainer Gaston Grant named Mike Luzzi to ride the 6-year-old son of Here’s Zealous.

David Jacobson-owned and –trained Fabulous Kid, who finished third behind Green Gratto in the Fall Highweight and checked in fourth in the Toboggan, is also set to invade from New York. Trevor McCarthy has the mount.

Majestic Hussar, runner-up to Sonny Inspired in the Fire Plug; Any Court Inastorm, a recent optional claiming allowance winner at seven furlongs; and Warrioroftheroses, who finished third behind Page McKenney in the Native Dancer; round out the General George field.

Hillwood Stable and Richard Golden’s Charmed Victory is scheduled to seek the third straight victory of his career without a loss against five rivals in the Miracle Wood. The Rodney Jenkins-trained son of Flatter is 2-for-2 over the Laurel surface.