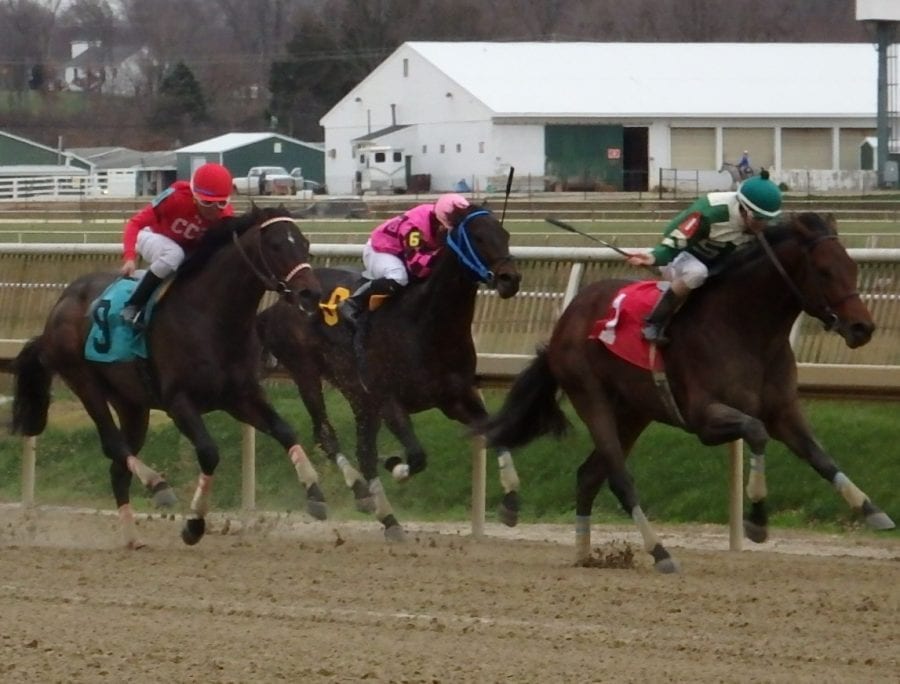 Lady Sabelia was a clear winner in the Willa on the Move Stakes in December. Photo by Laurie Asseo.

While temperatures are expected to plummet throughout the weekend in the Mid-Atlantic region, a pair of local trainers will be looking to heat things up considerably when their talented runners, both six-year-olds by Majestic Warrior, look to take home the top prize in the Grade 2, $300,000 Barbara Fritchie on Saturday and the Grade 3, $250,000 General George Stakes on Monday during the Laurel Park Winter Sprint Festival.

Despite the obvious similarities, Lady Sabelia and Majestic Hussar will actually head into the Barbara Fritchie and General George, respectively, from opposite ends of the spectrum. Lady Sabelia, trained by Robin Graham for owner-breeder Mrs. Frank Wright, will arrive as the defending champion of the Barbara Fritchie and likely favorite in the seven-furlong affair. She won the race last year as the 2-1 second choice en route to capturing four of six starts and over $350,000.

Majestic Hussar, on the other hand, will be something of a formful longshot for trainer Billy Campbell; Majestic Hussar has never won a stake, though he has finished second in three consecutive added-money events.

“She matured quite a bit going from four to five, and she’s doing really well right now,” Graham said of Lady Sabelia, who has won two straight stakes leading up to the Fritchie and boasts a solid 7-2-2 slate and earnings of over $500,000 from 12 local outings. “After the [Grade 1] Madison last year [at Keeneland] we gave her more longer gallops to get her to relax a little more. She was able to go wire-to-wire in local stakes, but in the Madison she went 22 and change and 44 and change and you can’t do that in those races. She’s definitely learned to relax and that should help her moving forward.”

Lady Sabelia finished sixth as the favorite after setting wickedly fast fractions in the Madison last year, the race that was the follow-up to her Fritchie triumph. She then was a disappointing second at 3-5 in the Skipat over Preakness weekend at Pimlico.

But in two starts since, Lady Sabelia has displayed more than a hint of tractability. She trounced the field in the $100,000 Pumpkin Pie Stakes at Belmont Park in November, winning by seven while rallying from fifth place.

Then she showed how well she’d learned her lessons while capturing the $100,000 Willa On The Move Stakes at Laurel two months ago in her most recent outing. One year after winning that race in wire-to-wire fashion, Lady Sabelia settled off the early pace under regular pilot Horacio Karamanos and then swept to command on the far turn and drew clear in the lane.

Among the primary contenders for the Fritchie on Saturday is Hot City Girl, a four-year-old daughter of City Zip trained by Linda Rice. In her most recent outing, Hot City Girl finished second in the Grade I La Brea Stakes at Santa Anita. She concluded her sophomore campaign with four wins from nine starts and earnings of over $450,000. Her runner-up effort in the La Brea ended a modest three-race win streak that included the Grade 3, $350,000 Charles Town Oaks and the $100,000 Safely Kept Stakes at Laurel.

One year ago she settled for second in the Wide Country Stakes here, beaten by another Graham trainee named Gypsy Judy, who is pointing for the Maryland Racing Media Stakes on the Fritchie undercard on Saturday.

“Hot City Girl is a nice filly, but Gypsy Judy has beaten her and Gypsy Judy is not as good as Lady Sabelia,” Graham said. “She’s definitely improved since then, but I like how well my filly is coming into the race.”

While Gypsy Judy might be the lesser of the two Graham trainees competing in varying stakes this weekend for the distaffers, Hot City Girl was clearly Rice’s second-best option initially for the Fritchie. La Verdad, last year’s Eclipse Award winner as champion female sprinter, would have been the favorite in the race but the talented, durable older mare who finished second in the Breeders Cup Filly and Mare Sprint and then tried older males in the Fall Highweight Handicap at Aqueduct on Thanksgiving Day, was retired soon after winning the Interborough Stakes over the inner track at the Big A last month.

Another top contender in the Fritchie is expected to be Michael Hushion trainee Princess Violet. The five-year-old Officer mare ran second to Lady Sabelia in the Fritchie before turning the tables on that rival to win the Madison. She has not won in four subsequent starts. 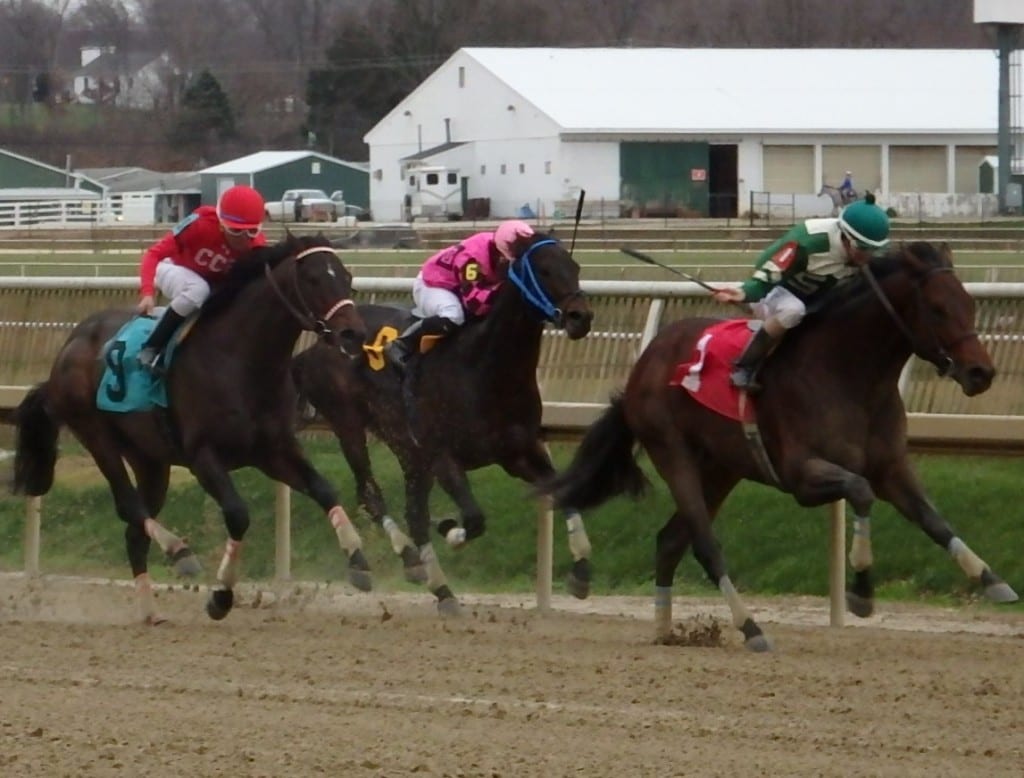 Majestic Hussar (#9) ran second in the Dave’s Friend Stakes at Laurel Park in December. Photo by The Racing Biz.

While Lady Sabelia is regarded as the horse to beat in the Fritchie, Majestic Hussar, a six-year-old horse by Majestic Warrior trained by William Campbell for owner William Bayne, Jr., will be looking to post an upset in the General George on Monday. Majestic Hussar will head into the General George having finished second in three straight stakes, the Fire Plug last month and the Dave’s Friend in December here and the Fabulous Strike at Penn National where he was the runner-up to Favorite Tale, who had been third in the Breeders Cup Sprint one start earlier.

Sunday morning at Laurel, Majestic Hussar worked five furlongs in 1:01 and galloped out six furlongs in 1:13.3 under Victor Carrasco, who is currently second in the Laurel Park jockey standings and will be aboard the Campbell trainee in the General George on Monday.

Majestic Hussar finished second in the Fire Plug Stakes last month on a day when he was steadied in tight quarters along the rail on the far turn and then steered toward to middle of the track where he gained the place spot behind longshot winner Sonny Inspired, a General George nominee who is pointing for the inaugural Ben’s Cat Stakes here next month.

“His last three races have been really good,” Campbell said. “He was a little unlucky in his last race, getting stuck down along the rail on the far turn, and he got caught behind a tiring horse in that race at Penn National. Besides, he was second to a horse that was third in the Breeders’ Cup [Sprint]. I think the seven furlongs will be more to his liking. It will give him time to settle early, and then he can hopefully work out a clean trip and then finish up well. He’s been running well and training great, so after he worked well on Sunday we’re definitely going to the [General George] Monday.”

Unlike Lady Sabelia, who owns a stellar record over the local track, Majestic Hussar only sports one win and a pair of second-place finishes and a modest $70,000 banked from six local outings heading into the General George. But clearly the numbers do not tell the whole story with Majestic Hussar. The improving son of Majestic Warrior has been second or third in three of his six local tries, and his lone win, against allowance rivals, came at the seven-furlong distance of the General George.

Those efforts came well after Majestic Hussar returned from a lengthy vacation after having bone chips removed from his right front knee. Campbell had claimed the runner for $25,000 in October 2014 after recalling his fourth-place finish, behind Orb, in the 2013 Fountain Of Youth Stakes at Gulfstream Park. While Orb went on to win the Kentucky Derby, Majestic Hussar faded into oblivion. But after Campbell claimed him, he convinced Bayne that the horse had plenty of talent but would need to have the chips removed to fulfill his potential.

“He wasn’t really running up to expectations after we claimed him,” Campbell said. “So, I told the owner that if he didn’t have the surgery and get some time off then he would just keep dropping [through the claiming ranks]. He agreed to have the surgery and we gave him more time off than he probably needed. But now he’s a healthy, happy horse. He’s been second in three straight stakes and he’s still getting better.”

There are also a pair of possible New York invaders exiting the same race who could make the trip south for the occasion. Sassicaia, a five-year-old Bernardini horse trained by Rudy Rodriguez for owner Robert LaPenta, rallied from midpack to capture the Grade III, $150,000 Toboggan over the inner track at Aqueduct last month. Green Gratto, who faded to third as the even-money favorite in that event, had previously won a pair of stakes over the inner track and could make amends in the General George if he makes the trip.

“I’m guessing a couple of those horses from New York will come down and maybe one or two from Florida or Kentucky will come in,” Campbell said. “When you put up that kind of money, the good horses are going to show up. But I think my horse deserves a shot in there, especially if we can work out a clean trip.”