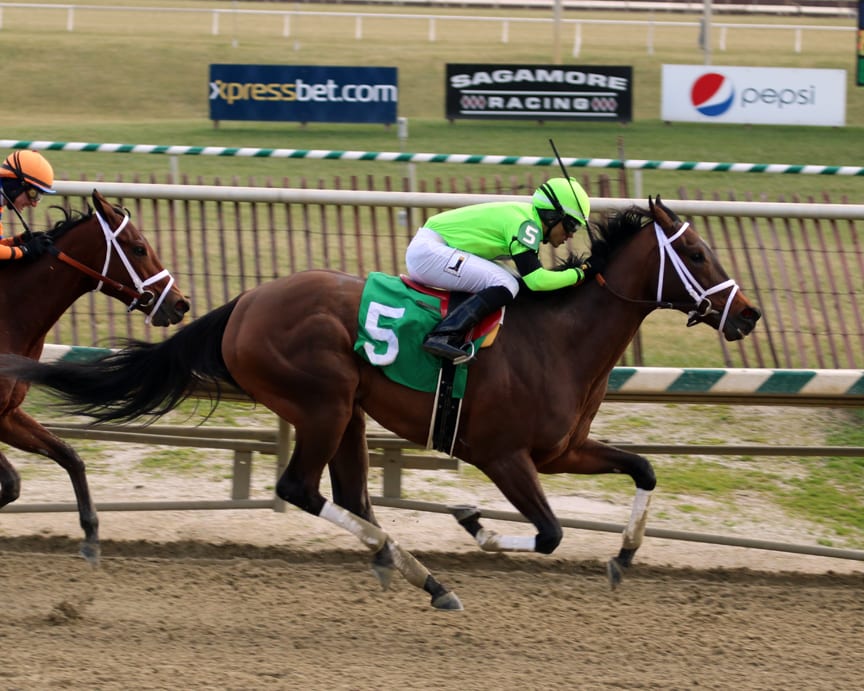 Trainer Michael Dilger didn’t make the trip from New York to Laurel Park, and neither did anyone from GRD Two Racing.

But Karen’s Silk did, and that was all that mattered.  The three-year-old daughter of High Cotton parlayed a patient ride by Jevian Toledo into a 1 1/4 length win in today’s $75,000 Marshua Stakes in her first foray into stakes company.

Sent off at 3-1, Karen’s Silk sat off a duel before moving to even terms while three wide entering the lane.  Under left-handed urging, she drew clear of her rivals to earn the score.

“I was in a great spot all the way,” said Toledo.  “When I asked her she gave me everything she had.”

Lost Raven, who won the Smart Halo over the strip for trainer Todd Pletcher, went off as the 1-2 favorite.  But she bobbled out of the break, allowing West Virginia shipper Aye a Song, whose only previous loss in six tries was to males, to grab the early lead

Lost Raven, under Trevor McCarthy, found an inside seam to draw to even terms with Aye a Song, ridden by regular pilot Christian Hiraldo, after a quarter mile in 23.15 seconds.

Meanwhile, Toledo and Karen’s Silk sat chilly a couple of lengths behind and just outside of longshot Decoratedwithstyle.

“I let the numbers 1 and 3 go to the lead because they were the speed horses in the race,” said Toledo.  “I was in the spot I wanted, and when I asked her. she responded very well.”