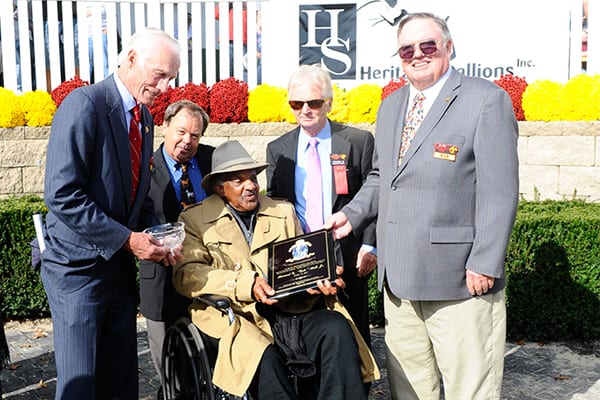 Longtime Maryland racetracker Howard “Gelo” Hall, Jr. passed away in the early hours of Thursday, December 10, 2015.  He was 88.

Hall had entered Sinai Hospital in Baltimore after taking a bad fall over Thanksgiving weekend.  After an initial period during which his condition seemed to improve, his condition worsened again last weekend.

Hall was the consummate racetracker.  Among the jobs he did in his long career: breaking yearlings, serving as an exercise rider, training horses, being a jockey’s agent, working in the racing office.

Hall’s career as an exercise rider spanned 19 years, and he spent 24 years as an agent.  In between, he trained horses.

His career as a trainer was brief and unsuccessful; the horses, he told HRTV, were “relieved” when he switched from training to being an agent.  But it was in that new role, as an agent, that Hall thrived, representing several leading riders, including Bill Hartack during the year when Hartack won the Preakness Stakes aboard Majestic Prince, in 1959.

In later years, Hall became something of the grand old man of Maryland racing, a living, and beloved, connection to the sport’s glory years.  In 2014, he received the Joe Kelly Unsung Hero Award from Maryland Million, Ltd. in a winner’s circle ceremony on Maryland Million day.

“With this award we recognize honesty, hard work and humility – qualities which serve as inspiration to others,” Maryland Million’s board of directors said in a statement at the time.

He also had a prominent role in the recent documentary about Maryland racing, “Racing the Times,” in which he recounted the experience of attending, along with his father, the famed Seabiscuit-War Admiral match race at Pimlico in 1938.

“It wasn’t only a race,” he said.  “It was euphoria… It was such a promise kept of a real horse race.”

Despite that excitement, which helped launch Hall on a 60-plus year career in the industry, he counted neither Seabiscuit nor War Admiral as the best horse he saw.  That honor, instead, went to Count Fleet, who, Hall said, “had a gifted speed.”

Always dapper — “I try to wear my best attire, a suit and a hat,” he told the Baltimore Sun. “You’re representing something.” — Hall wore his love of racing as a badge of honor.

“As they’re using the axiom, I wouldn’t trade it for anything,” he told HRTV.

Hall was pre-deceased by his wife Lillian and is survived by daughter Janis Hall, of Baltimore.  Funeral arrangements are pending.