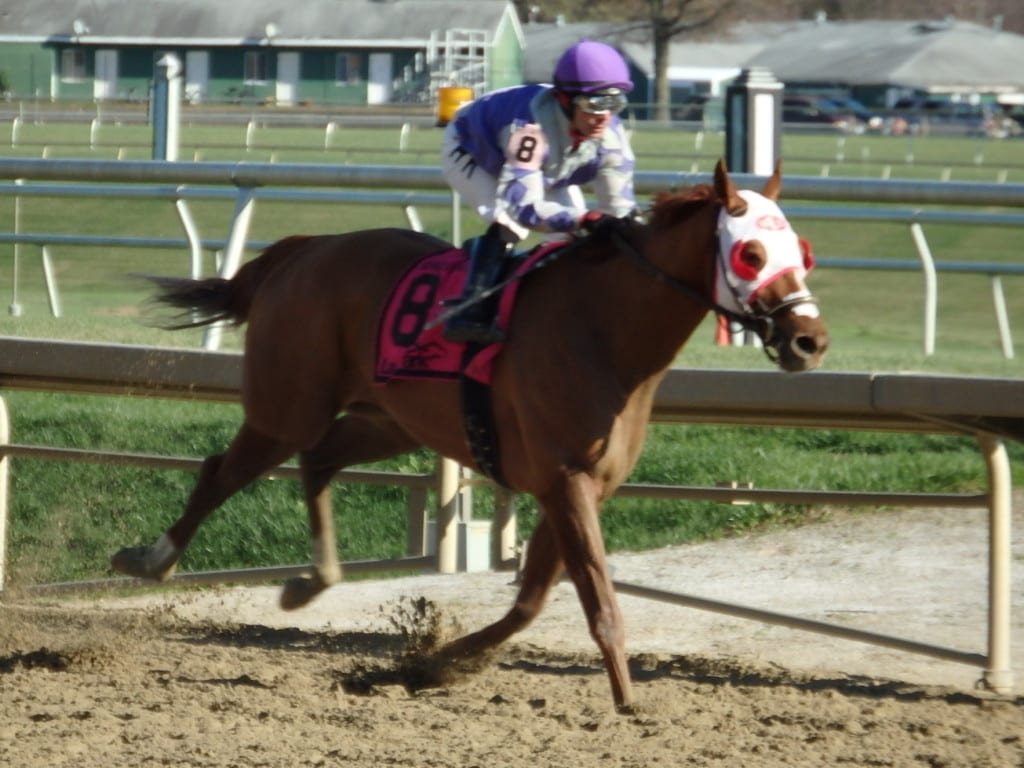 Page McKenney was much the best in a dominant score in the Richard W. Small Stakes at Laurel Park. Photo by The Racing Biz.

King Leatherbury has had tonight’s six-furlong, $200,000 Fabulous Strike Handicap for three-year-olds and up at Penn National in his sights for old-timer Ben’s Cat all year long.

Mary Eppler swore that she wouldn’t take Page McKenney to Grantville for the 1 1/16 mile, $100,000 Swatara, also for three-year-olds and up, after he thrashed seven rivals in the $100,000 Richard W. Small at Laurel Park just 11 days ago.

But both are scheduled to face the starter this evening, and both are among the logical contenders in their respective races.

Ben’s Cat, the popular nine-year-old who has won 30 races and nearly $2.5 million, is the three-time defending champion in the Fabulous Strike but figures to have his hands full tonight.

Last year, the Maryland-bred son of Parker’s Storm Cat obliterated a good field by over three lengths in this event, stopping the timer in a sharp 1:09 2/5 and earning a 115 Equibase speed figure.  That completed a season in which he won four races and earned over $450,000.

But this year hasn’t been as kind to Ben’s Cat, who was bred and is owned and trained by Hall of Famer King Leatherbury, and it appears that Father Time may be catching up to him.  He does own two wins, in the Jim McKay Turf Sprint over Preakness weekend at Pimlico, and for the sixth time in the Mister Diz for Maryland-breds at Laurel Park.  But his season also includes his first two off-the-board finishes since 2012, when sixth in the Grade 3 Parx Dash and fifth in the Grade 3 Turf Monster, both at Parx Racing.  He also has suffered a pair of nose defeats, most recently second a nose in the Maryland Million Sprint, a disappointing outcome for a runner who was 3-5 at post time and was gunning for a record-setting fourth straight Maryland Million victory.

Ben’s Cat is 3-1 on the morning line, and regular pilot Julian Pimentel will be in the irons.

While bettors generally would salivate over those odds on Ben’s Cat, however, in this event, it feels like an underlay.  The 2-1 morning line favorite is the four-year-old Pennsylvania-bred Favorite Tale, who most recent effort was an excellent third-place finish in the Grade 1 Breeders’ Cup Sprint, less than two lengths in arrears of superb sprinter Runhappy.  Favorite Tale, trained by Guadalupe Preciado for breeder Paul Conaway’s PJG Stable, also owns a win in the Grade 2 Smile Sprint Handicap at Gulfstream earlier this season.

Favorite Tale will carry top weight of 124 pounds, while Ben’s Cat and Amelia’s Wild Ride will each carry 121.

One race prior to the featured Fabulous Strike, the sixth running of the Swatara Stakes has drawn a solid field of older runners.

Page McKenney, once a $16,000 claim, has won or placed in all nine of his starts this year, and his win in the Small pushed his career earnings past $920,000.  Page McKenney is the 5-2 morning line favorite, and regular rider Horacio Karamanos will do the honors.

But the competition figures to be tough.  Todd Pletcher and Javier Castellano will be represented with Catron (3-1), who was won four of nine career starts but does not yet own a stakes win.

Two runners who have won added-money events are Stormin Monarcho (7-2) and Kid Cruz (9-2).

Stormin Monarcho, trained by David Jacobson, won this event a year ago as the 6-5 favorite.  He also defeated Page McKenney in last year’s Richard Small at Laurel Park and enters this race off his best performance — in an allowance win — since taking the Mr. Sinatra Stakes on the Aqueduct inner track in March.  Trevor McCarthy will ride.

Kid Cruz ran up the track in the 2014 Preakness but subsequently won the Grade 3 Dwyer at Belmont Park, his fourth stakes win of 2014.  This year has not been as productive, however, and Kid Cruz will enter this event winless in four 2015 starts.  The Linda Rice trainee most recently ran second to Stormin Monarcho in an allowance heat and will have Jose Ortiz aboard.

The rest of the field includes three Pennsylvania-breds — Grasshoppin’ (10-1) for trainer Mario Serey, Jr.; Kobel (8-1) for trainer Keith LeBarron; and Guns of Steel (15-1) for Bernie Houghton — and Maryland-bred Admirals War Chest (12-1) for Corby Caiazzo.  Of them, Admirals War Chest, winner of the Maryland Million Classic last month, is the only stakes winner.

NOTES: In the evening’s firs stake, the $75,000 Blue Mountain Juvenile Fillies for Pennsylvania-bred two-year-old fillies, Behrnik’s Bank is the 2-1 favorite.  She broke her maiden at first asking over the strip, blitzing the field by 18 lengths in a sharp 1:09.64 for six furlongs.  That was faster than older male state-bred allowance runners completed the distance one race later… Post time for the evening is 6:00 p.m., with the Blue Mountain set to go off at 6:27, followed by the Swatara at 6:54 and the Fabulous Strike at 7:22…