What we learned at the Laurel Park town hall 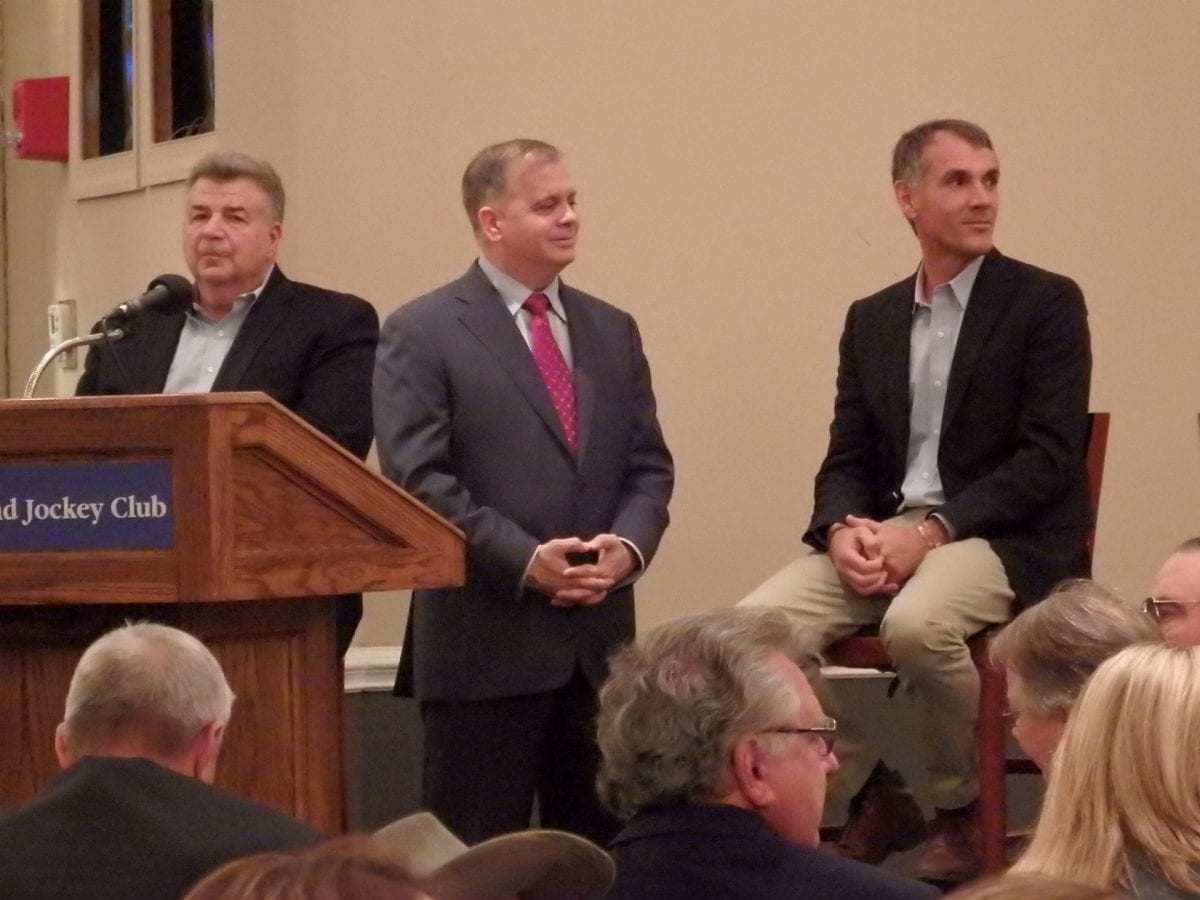 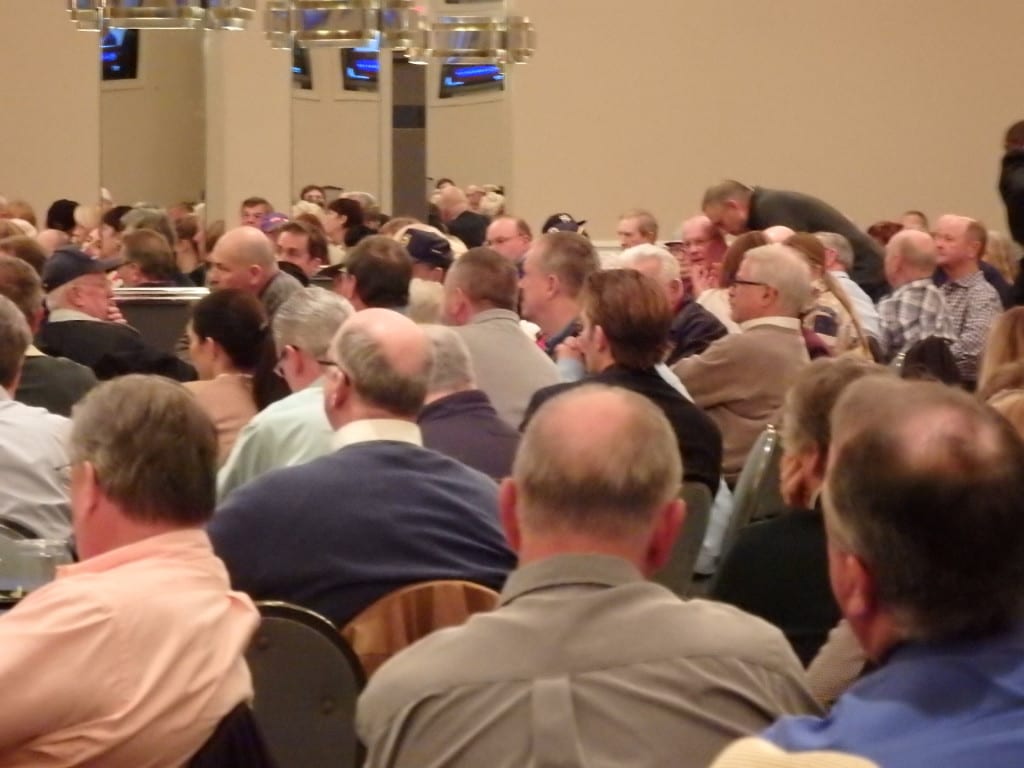 A big crowd came out to Friday’s town hall meeting. Photo by The Racing Biz.

Maybe it was the free food.

Friday’s Town Hall meeting/Maryland racing pep rally packed the Carriage Room at Laurel Park with nearly 400 people, and oddly enough, they came not to bury Caesar but to praise him.

If there’s one skill most racing folk share, it’s the ability to grouse, but even that was in short supply Friday from the evening’s diverse crowd, which ranged from breeders and horsemen to politicians to ministers to employees to self-described $2 bettors.

Of that last group, Stronach Group Chief Operating Officer Tim Ritvo said, “We love the $2 bettor, and if we had a lot more of them, we’d be better off.”

Here’s what we learned Friday evening:

1. The Maryland Jockey Club’s feeling pretty good about itself.

The last time the Maryland racing community gathered in the Carriage Room to hear from management — five years ago, at a Maryland Racing Commission meeting regarding proposed racing dates for 2011 — most of those in attendance came with torches and pitchforks.  Ritvo’s willingness to invite them back speaks to the progress he believes the company’s made.

The management team of Ritvo and Sal Sinatra has been in place for almost exactly a year, which made some reflection timely.  Ritvo ticked off the company’s achievements:

“Everywhere racinos come into racing, racing gets put on the backburner,” he said.  “At the racinos around the country, you have seen decline of racing. You will will not see that here.”

2. There’s a deep reservoir of affection for Pimlico, which may or may not matter in the end.

There hasn’t been much chatter about Old Hilltop since Preakness-time, but that all changed once the question-and-answer portion of Friday’s festivities began.

The first question of the session, from Maribeth Kalinich, and the last, from April Smith, concerned Pimlico, as did plenty in between.  That wasn’t entirely coincidental; the two women are the co-founders of the “Friends of Pimlico Race Course” Facebook page, whose perhaps more evocative address pleads, “Save Pimlico.”  Smith spent the aftermath of the meeting handing out black buttons with yellow hearts and the word Pimlico within.

Baltimore City Councilwoman Rikki Spector, whose district includes Old Hilltop, rose to praise Ritvo for working with her community as “partners” in a shared effort in “doing what we can to keep Pimlico a viable Preakness home.”

That comment — and in fact, several comments supportive of Pimlico — brought solid applause from the group.

“I can tell you that absolutely everything is on the table,” he said in response to Kalinich’s question.  The majority of racing, he said, would be at Laurel.

Later, Smith opined, “Pimlico is the historic home of the Preakness. You can’t just take the Preakness out of there.”

“One thing’s for sure: the status quo wasn’t working,” Ritvo replied.  “We respect the heritage of Pimlico.”

3. Laurel’s going to look a lot different when all is said and done.  For example, when it hosts the Breeders’ Cup.

While the Stronach Group has made a lot of improvements to the front side at Laurel in the last year, those changes have primarily been in the “replace the carpet/paint the walls/rearrange the furniture” vein.  In other words, they’ve made changes that were necessary and improve the customer experience — but the place is still pretty clearly Laurel Park.

That may change in the coming years.

“Everybody that walks around the facility can see our commitment is here,” Ritvo said.

He then outlined some of what the company has in mind: building a walking ring in the back of the building where the grandstand entrance is; building luxury suites and sky boxes; and moving the glass that encloses the grandstand farther back to make the seating area more of an indoor/outdoor facility.

Those improvements, said Ritvo, could put the track in line for some plum assignments.

“We could be a Breeders’ Cup host sometime in the near future,” Ritvo said.

4. Bowie has a future — but it’s unclear what that is.

Trainer Donovan Haughton raised the question of Bowie’s future.  The training center — for generations a racetrack and once the only mid-Atlantic track to offer winter racing — closed in April, its last horses dispersed to barns at Laurel and Pimlico.

“Bowie is in our big plans,” Ritvo said.  “We just haven’t decided in which direction.”

He added “We may need it as a training track, but we may not.”

5. Annapolis is never far from the racing industry’s minds.

The legislation that allowed slot machines — later expanded to full casino gambling — and set aside some of that money for horse racing and breeding set the stage for the renaissance of racing in Maryland.

Keeping the racing industry’s relationships with legislators in good stead was a topic that came up frequently during the evening.

“We need to be vigilant,” said Ritvo.  “We need to show the legislators our business is thriving.  The slot contribution is an investment, and we return more than we get when we’re doing well.”

Bruce Quade, a member and former chairman of the state Racing Commission, echoed those thoughts, while recalling a time when the industry was widely viewed in the capital as fractured and difficult.

“It’s only recently since the advent of the 10-year deal [that governs racing] that we’ve gone down there [to Annapolis] speaking as one,” he said.  “Now the legislature views racing as having its act together.  The money they’re investing on the sport, they’re getting back in spades.”

In all, it was an upbeat evening that received favorable reviews from many in attendance.

“I’ll tell you what,” said Maryland Million president Jim Steele as he surveyed the crowd.  “We’re all in this together.”