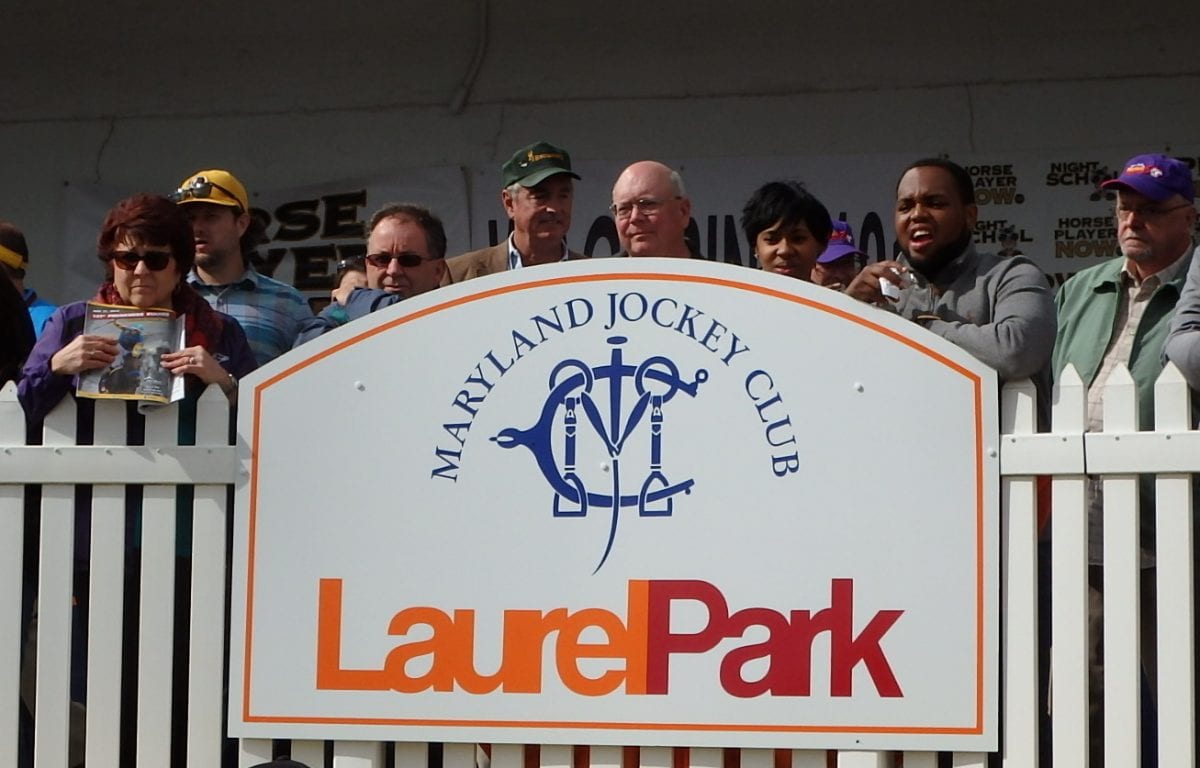 Narrowly beaten in each of his past two starts, D Hatman Thoroughbreds’ Sonny Inspired makes his return to stakes company in Saturday’s $350,000 Frank J. De Francis Memorial Dash, which tops the 11-race card.

A gelded 4-year-old son of Artie Schiller, Sonny Inspired was third by a head in a seven-furlong optional claimer Oct. 23 at Laurel, his first start since being beaten a neck when third in a Timonium allowance Aug. 29.

Those starts came after a pair of failed turf attempts, where Sonny Inspired was off the board in the Lucky Coin at Saratoga and third behind Ben’s Cat and Night Officer in Laurel’s Mister Diz Stakes Aug. 22.

“He’s the kind of horse that runs to his competition. He wants to win or lose by a nose,” trainer Phil Schoenthal said. “We’re going to make an equipment change and run him with blinkers off and see if that helps him.”

Bred in Maryland and based at Laurel, Sonny Inspired represents a local threat in the De Francis. He has run 15 times at Laurel and been worse than third just twice, with four wins. His last victory came over the track and at the distance in an optional claiming allowance Feb. 14.

“The horse is doing good and ready to run. We might as well run and take a shot on our home track,” Schoenthal said. “He’s doing great, he has a great appetite, and he’s happy. He has his game face on, so there’s no reason not to put him in the entry box.”

More than 2 ½ decades since Mike Luzzi got his start on the Maryland circuit, apprentice jockey Lane Luzzi is following in his father’s footsteps.

The 18-year-old Luzzi made his professional debut Wednesday at Laurel Park, closing from last after a troubled start to finish third in a $15,000 claiming event for 3-year-olds and up going 5 ½ furlongs on the main track.

Luzzi’s mount, Blimey, is trained by Lacey Gaudet, whose father, Eddie, was instrumental in giving Mike Luzzi a boost early in his career. The elder Luzzi would earn the Eclipse Award as top apprentice in 1989 and go on to more than 3,400 career victories, and counting.

Despite having had to battle back from numerous injuries, including one that cost him 10 months before his return this summer at Saratoga, Mike Luzzi remains supportive of his son’s career choice.

“It’s kind of mixed emotions. I’m a jockey. I block things out very easily. That’s why I’ve been able to do this for so long,” Luzzi said. “I kind of block all that stuff out and concentrate on doing what I can for him. He’s kind of in other people’s hands, and comes to me for advice. He’s been in the jock’s room since he was 4. He’s been riding the Equicizer since he was 3.”

Represented by agent Scott Silver, Lane Luzzi is not named to ride in any of the 11 races on Saturday’s six-stakes program. Mike Luzzi has the call on Spring to the Sky in the De Francis Dash. Luzzi won the inaugural running of the De Francis in 1990 aboard Northern Wolf.

Gary Hacker’s Team Tim will try to win his third consecutive start at Laurel Park Saturday when the Maryland-bred steps up to face stakes company for the first time in the City Of Laurel Stakes on the Fall Festival of Racing Program.

The 3-year-old son of Sharp Humor hasn’t been off the board since last February In August, when winning a state-bred entry-level allowance race going seven furlongs on Maryland Pride Day, he beat Admirals War Chest, who went on to win an allowance race at Parx, followed by a win in the Maryland Million Classic.

After his victory on Maryland Pride Day, Team Tim came back Sept. 19 with another impressive performance in an entry-level allowance race against open company. Team Tim is 15-1 and will break from the No. 8 post in The City Of Laurel. The gelding will be saddled by leading trainer Tim Keefe and leading jockey Jevian Toledo.

“The horse is doing well and I’m giving him plenty of time between races,” Keefe said. “He’s coming off a couple of good wins, he likes Laurel, and he seems like he is improving. He’s run a better race each time I’ve sent him out there.”

Sheldon Russell was aboard Team Tim for the last two wins, but Russell won’t be riding the next two months due to a shoulder injury. Toledo has worked Team Tim in the morning.

“I’m disappointed Sheldon is hurt, but certainly having Toledo on him is not a negative, it’s a positive. He’s worked the horse in the morning, so he knows him,” Keefe said.

The morning-line favorite for The City Of Laurel is the New York-shipper El Kabeir, who is 2-1 for trainer John Terranova II and will break from post two. After he won the Kentucky Jockey Club (Gr. II) as a 2-year-old, El Kabeir won two Grade three’s last winter at Aqueduct, the Jerome and Gotham.

After his win in the Gotham, the 3-year-old son of Scat Daddy was third in The Wood Memorial (Gr. I), and then didn’t race again until recently, when he finished fifth as the 6-5 favorite in the Bold Ruler Handicap (Gr. III) going seven furlongs.

The second choice is the Todd Pletcher-trained Savoy Stomp, who will break from the rail. The 3-year-old son of Medaglia d’Oro is coming into the race off an impressive win against older horses in an entry-level allowance race at Belmont Park going six and a half furlongs following an eight-month layoff.

Keefe, who is also president of the Maryland Thoroughbred Horsemen’s Association, realizes that the early pace of The City Of Laurel will be key to how his horse runs.

“He is a come from behind type of sprinter and it should set up well for us. There is enough speed in there and we’ll be sitting off of it and hopefully we’ll get a good trip and I know he’ll give us his all,” Keefe said.

Currently, Keefe is tied with Mike Trombetta for leading trainer of the meet with 12 wins. Even though he is no stranger to winning stakes races, Keefe admits this is his best meet so far at Laurel Park.

“I’ve never had this kind of meet before, so I’m kind of in uncharted territory,” he said. “But you always want to keep getting better and better. We’ve had a good early part of the meet and hopefully we can stay strong in the later part of the meet.”

Along with his horses staying strong, Keefe is strong outside of the race track as well. In 2011 and 2013, he competed in Ironman Triathlons to raise money for horse-related charities.

All from Maryland Jockey Club releases