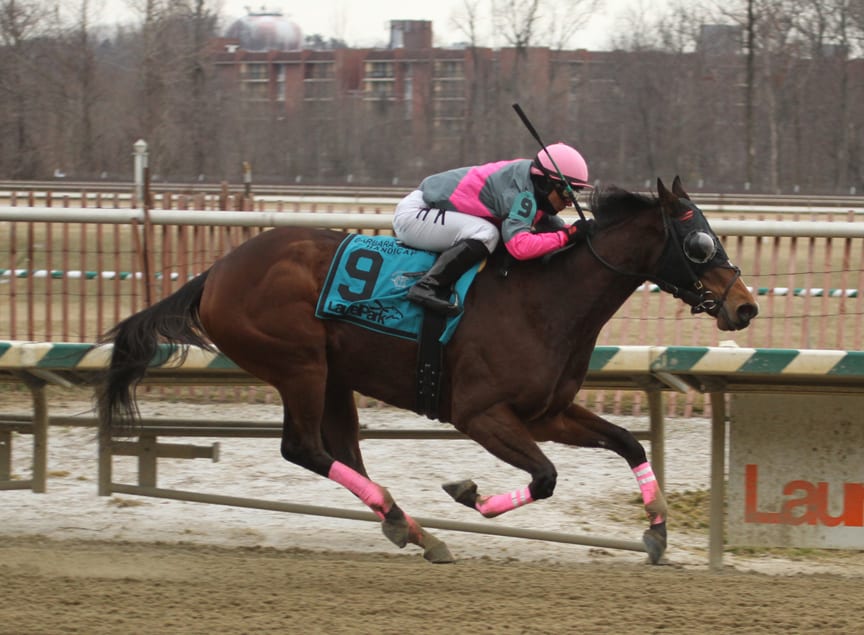 The Laurel Park-based daughter of Majestic Warrior had achieved graded glory in winning the Grade 2 Barbara Fritchie on her home track in February, but a subsequent foray into Grade 1 company, in the Madison at Keeneland, proved less fruitful.  Loose on the lead, she zipped clear while setting absurdly fast fractions, only to falter and finish last.  A follow-up try, in the Skipat at Pimlico, led to a similar pace-and-fade outcome, though she did hold second.

Sunday, breaking from post-position 5 as the 7-2 second-choice with regular rider Horacio Karamanos aboard, the 5-year-old daughter of Majestic Warrior was quickly guided toward the rail where she tracked pace setter R Free Roll, who set keen fractions of 22.52 seconds for the opening quarter-mile and 45.54 for the half.

“This filly is always so good. That’s what she showed today,” said Karamanos. “It’s been almost five months since she’s raced and when she comes back after a long time, she runs like that. After her last breeze I thought she could win this race. She broke well out of the gate, once you get [her] covered up behind somebody, she reacts so well. She was moving nice and easy behind those horses, so I knew by the five-sixteenths [pole] that I already had it.”

With the victory, her third of the year, Lady Sabelia boosted her career earnings to $605,465 for owner Mrs. Frank P. Wright and trainer Robin Graham.

“In her early races she would sit just off the pace, so that’s what we were hoping for,” said Graham. “Horacio said today as soon as he got her covered up, she relaxed and it was perfect.”

R Free Roll held on for second-place by a head followed by Tea Time, Hey Kiddo, Classic Point, Shogun Samurai, and Medaglia d’Argento. Eloquent Tribute was scratched from the race.