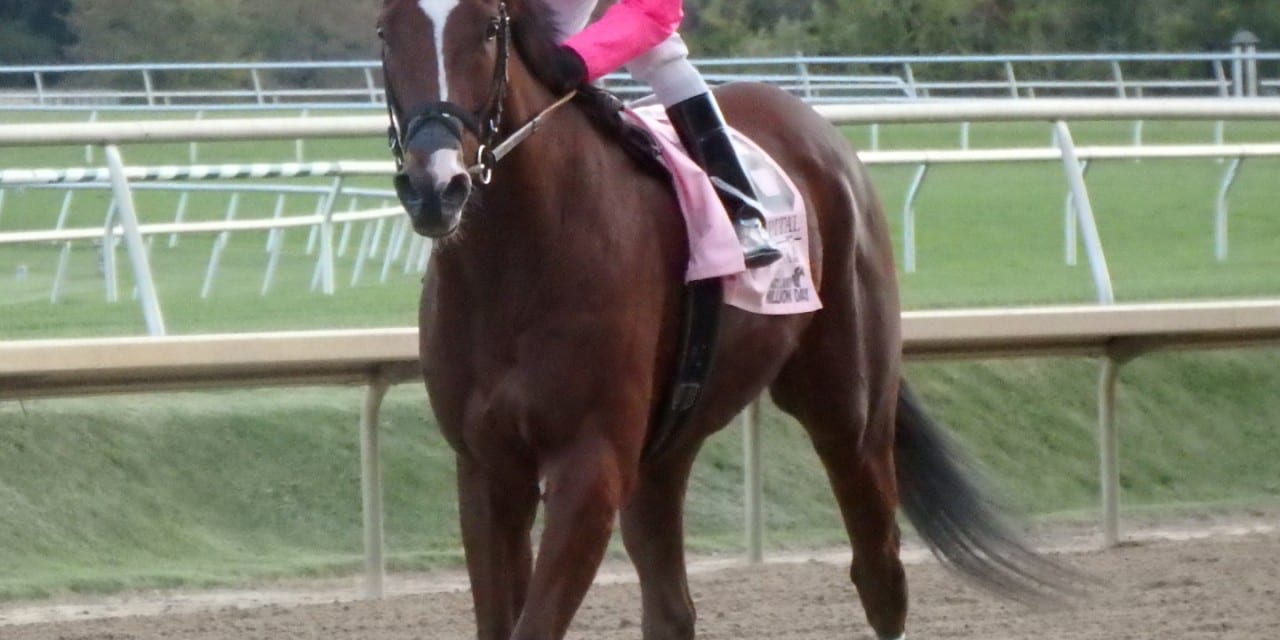 The best-laid schemes, Burns said, gang aft agley, which is to say that in life, and in horse racing, it’s good to have a backup plan.

And the wisdom of backup plans was certainly on display during Saturday’s 30th Maryland Million at Laurel Park.

Consider the case of Admirals War Chest, the front-running winner of the $150,000 Classic.  He’s a son of Elusive Charlie, an unraced Elusive Quality horse that, said owner Dr. Stephen Sinatra, would have been sold at auction had he not been injured first.

Will interest in breeding to Elusive Charlie increase off this win?  Sinatra’s not concerned about that.

“I’m not too worried about the bookings,” he said with a chuckle in the winner’s circle post-race.  “I have about 25 of his offspring right now, and 20 of them have hit the board, so I feel really good.”

But for plans going awry — and still working out — it was hard to beat Corvus, the winner of Saturday’s Maryland Million Nursery for two-year-olds.

“I wasn’t going to run,” said trainer Katy Voss, who co-bred Corvus with her partner Bob Manfuso and owns him in partnership with Manfuso and Wayne Harrison.  “I nominated because we wanted to make sure we didn’t have too  many short fields on Maryland Million day.”

That turned out not to be an issue; field sizes and wagering were robust.  But with the scratches of a couple of the logical contenders, including Steve Asmussen trainee Love That Jazz, recent winner of the Aspirant for New York-breds at Finger Lakes, Voss and partners figured it was worth a shot.

And, Voss thought, this would give the son of Dance With Ravens a good work in company prior to their real target, a maiden special weight race two weeks hence.

“I told [jockey] Jevian [Toledo], just let him settle and let him finish a little bit,” Voss explained.  “We’re going to work him again next week before we run him.”

She figured that Corvus, out of the Polish Numbers mare Tanca, was talented enough to run on late to get a piece.

“I expected him to get a lot of dirt in his face and come running and be third or fourth,” she said.  “That’s what I expected.”

Then the gates opened, and Corvus, a horse for whom, Voss said, “the light bulb hadn’t gone on,” broke straight as a string and directly to the lead.  Approaching the quarter pole, he disposed of his main pace rival, fellow longshot Crazy Wild Bill, and had plenty in reserve to repel the late bids of Flash McCaul and Captain Alex, winning by nearly two lengths.

Not quite what the partners expected.

Of course, nothing’s gone quite to plan with Corvus.

Voss and Manfuso tried to sell him last year at the 2014 Fasig-Tipton Midlantic Fall Yearling Sale.

“He was a gorgeous horse at the sale, [and] everybody loved him,” Voss said.  “But they took one look at his ankle…he had a nasty cut on it.”

Then Harrison came aboard.

“I’d just bought two horses at the sale, [and Manfuso] called me up and said, ‘I want in,'” he explained.  “He let me in on this horse, and I let him in on the other two.”

He looked good — Voss called him “the most gorgeous thing to watch move” — and trained well over the summer, but a couple of minor issues delayed his debut.  Just long enough for the Maryland Million to come into sight.

Voss may have been hoping for a bit of late running and a piece of the action, but Harrison, the third partner, had his sights a bit higher.

“One of the exercise riders on one of the favorites, he worked both horses and he liked our horse better,” Harrison said.  “That made me feel good.  It made me comfortable to make a bet.”

How big a bet?

Harrison paused.  “Enough to take everybody out to dinner,” he said.

That, at least, went exactly as planned.