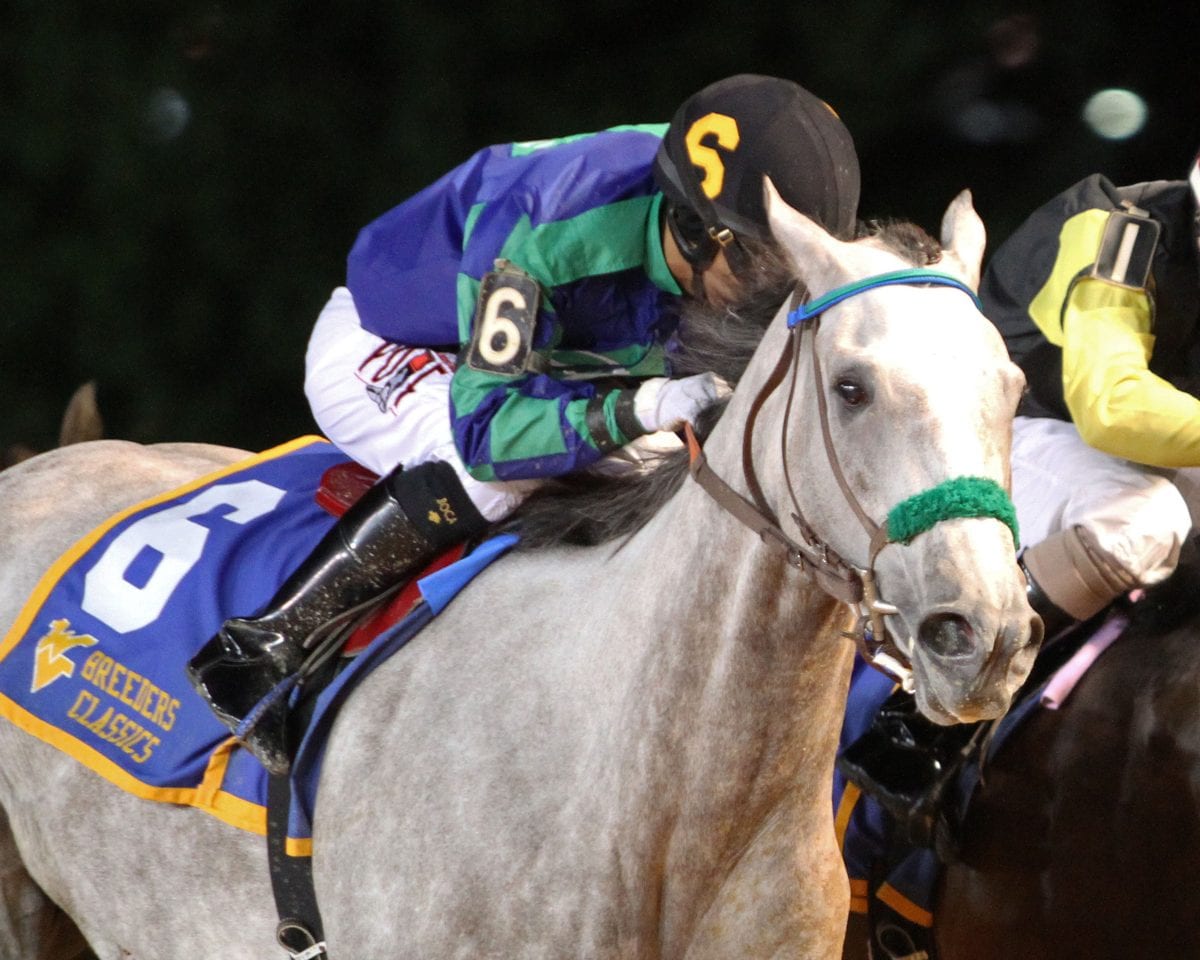 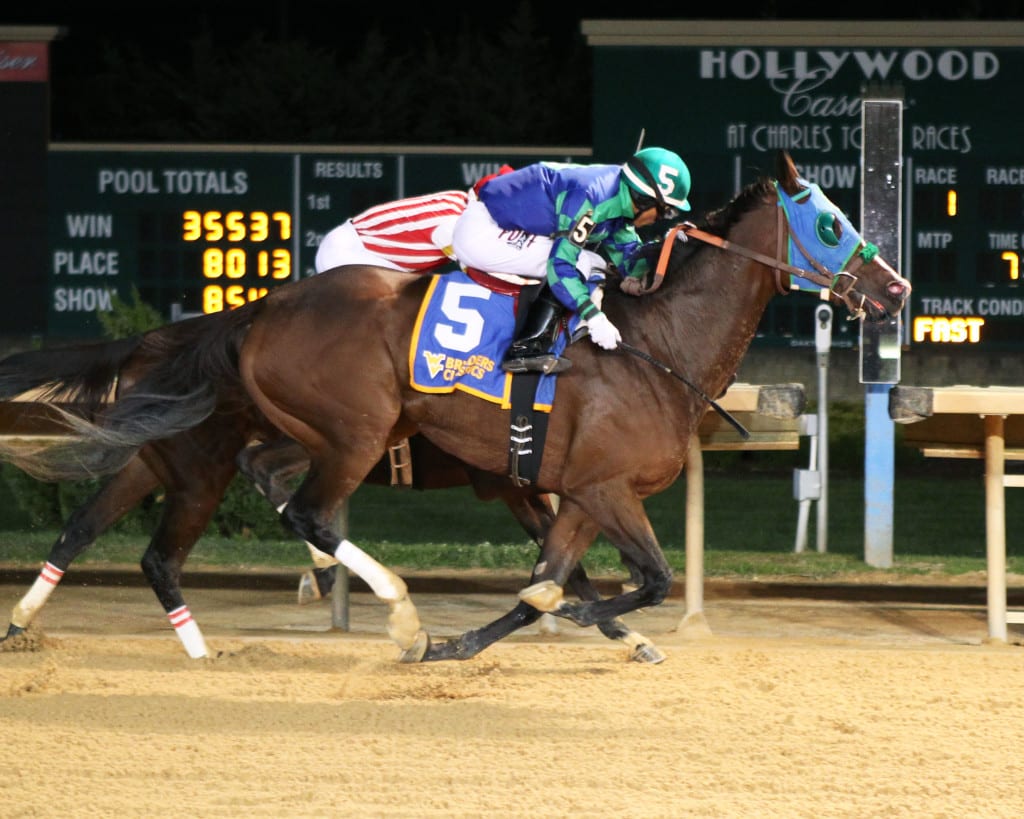 Heading into the 29th edition of the West Virginia Breeders Classics night at Charles Town, longtime leading local conditioner and former rider Jeff Runco was optimistic about his chances to win several races on the card.  And he had reason to be: four of his horses were morning line favorites.

Still, his runners exceeded his expectations, notching the first three stakes on the program and then capping the night by taking the finale for a rare training grand slam, with three of the winners having been bred by Coleswood Farm, consisting of him and wife, Susan.

“My wife really does all the homework on the breeding part of it, and I am lucky to get to train them,” Runco said after Coleswood Farm product Slip The Cable led throughout to capture the $60,000 West Virginia Lottery Breeders Classic, the last race on the card. “We’ve had a little luck over the years with our homebreds. We still don’t have a lot of mares. But for a small operation, we’ve done okay. But the credit goes to my wife. She finds the right stallions for the mares and then we just hope for a healthy foal and then something good to train. These nights are great for local breeders.”

With three wins under his belt heading into the finale, Runco sent out Slip The Cable in the WV Lottery looking for a hint of redemption. A three-year-old Midshipman gelding out of a Not For Love mare, Slip The Cable had been the beaten favorite in the Robert Leavitt Memorial in his most recent outing on a night when he bolted in the lane and faded to fifth as Charitable Annuity rallied for a 12-1 upset.

That race came back looking like a tough one: one race prior to the WV Lottery, Charitable Annuity rallied again, this time to capture the $500,000 West Virginia Breeders Classic over older rivals Hidden Canyon, Lucy’s Bob Boy and Russell Road.

Nevertheless, the Runco-trained homebred was the 2-1 second choice in the WV Lottery, as Hear The Chatter assumed the favorite’s role for owner-trainer John Casey.

When the gate opened in the 7-furlong WV Lottery, Slip The Cable broke alertly and went to the front passing the finish line the first time, and Hear The Chatter was forced to chase him. The two had dueled early in the Leavitt, but on this night Slip The Cable was well clear of his main rival early. He faced moderate pressure from the favorite down the backside through modest early fractions of 23 3/5 seconds and 47 4/5 for the half-mile, then sprinted clear from Hear The Chatter in the lane to a six-length score in 1:25.25 for his fourth win from five career tries. 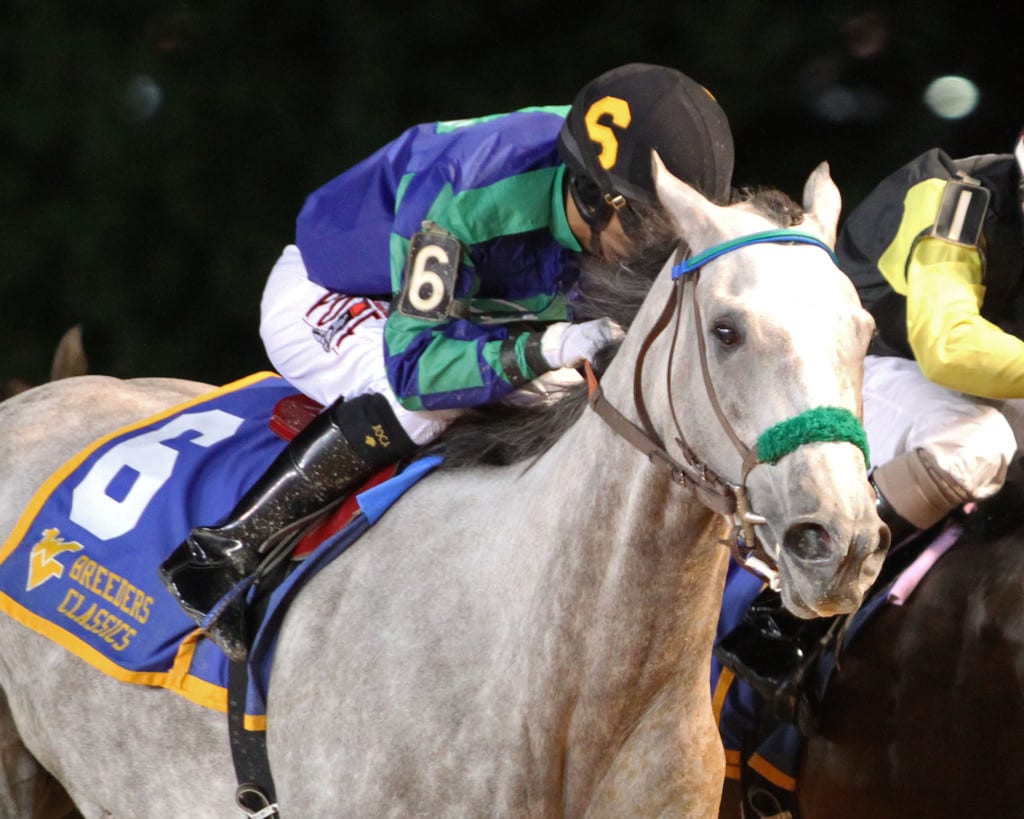 Navy Ribbon remained undefeated with a narrow score in the WV Division of Tourism. Photo by Coady Photography.

“In the Leavitt, they battled early and then my horse just bolted inside the eighth pole,” Runco said. “Tonight my horse had the inside post position and he was able to get the front and keep the other one outside of him. We’ve always been high on him. He bounced back from the Leavitt great, so we thought we would try him in here tonight. When we drew inside of Hear The Chatter, I thought we had a good chance to beat him. It was a big night for us and that was a great way to finish. When you run 11, you’re always hoping to have some luck with one or two of them and we did well tonight.”

After the first three races on the card, Runco almost appeared to have a second home in the infield winner’s circle where all of the WV Breeders Classics trophy presentations are held. The first two winners that he saddled, Spa Creek and Navy Ribbon, were also bred by Coleswood Farm. The third, Bullets Fever, is a two-year-old Fiber Sonde gelding bred by John McKee. Bullets Fever made his career debut on September 30 and easily prevailed in a one-turn maiden special weight event for him and owner David Raim. He is a full-brother to Hidden Canyon, who finished a gritty second in the $500,000 West Virginia Breeders Classic in his first attempt at nine furlongs around three turns over the local oval.

“We bought him off John a year ago and he looked like he would be okay,” Runco said of Bullets Fever. “He came into his first race really well and I told David that if he came out of it okay we would run back on Classics night. I looked at him on Tuesday and told David he looked good, so I entered him on Wednesday. He ran a big race tonight. It was his first time going two turns and stretching out, and he did it pretty easily. John has a yearling full-sister to him that I am going to look at on Friday before I head out to Lexington.”

Bullets Fever was one of two juveniles that Runco saddled for the $60,000 Vincent Moscarelli Memorial.  Jockey Arnaldo Bocachica, typically Runco’s go-to rider, opted for the other one, North Atlantic, another Colewood Farm product.

The full-brother to Hidden Canyon stalked the early pace, surged to command down the backside and then drew clear in the final quarter-mile to his second win in as many starts by covering the 6 1/2-furlongs in 1:19.76.

It was also a good night for McKee.  His homebred Aye a Song won the $60,000 Triple Crown Nutrition Breeders Classic.  And his broodmare, Ghost Canyon, scored as the dam of both Bullets Fever and Hidden Canyon.

Runco opened the card by taking the early daily double with homebreds Spa Creek and Navy Ribbon. Spa Creek, a five-year-old Smoke Glacken mare that he co-owns with Raim, eventually wore down Dimples to capture the nine-furlong, $70,000 WVBC Distaff by a neck in 1:54.38. Idle for much of the season, Spa Creek notched her second win in as many starts this year and now owns a solid 7-7-2 slate and nearly $190,000 banked from 21 career outings. She had finished second in the same event one year ago, then prepped for the Distaff by taking a two-turn allowance last month.

Then in the next race on the card, Navy Ribbon lived up to her role as the 3-5 favorite when she wore down Nay’s Back to capture the $60,000 WV Division of Tourism BC by a neck and remain unbeaten in five lifetime tries. Unraced at age two, Navy Ribbon won at first asking against maiden special weight foes in June and then won three straight allowance events before making her stakes debut on the Classics card. She was bred by Coleswood Farm and Neil Glasser and is still owned by both parties.

“She had to work for it tonight for sure,” Runco said. “That other filly inside of her really dug in late. She got a late start to her career, but she’s really come into her own. We raced her mom [Go Navy] and kept her as a broodmare. I had won three stakes on a night before, but never three in a row before tonight. We won the first two by a couple of heads. The difference between winning two tonight and winning four was no more than a length. Just goes to show you that you need a little bit of luck in this game.”